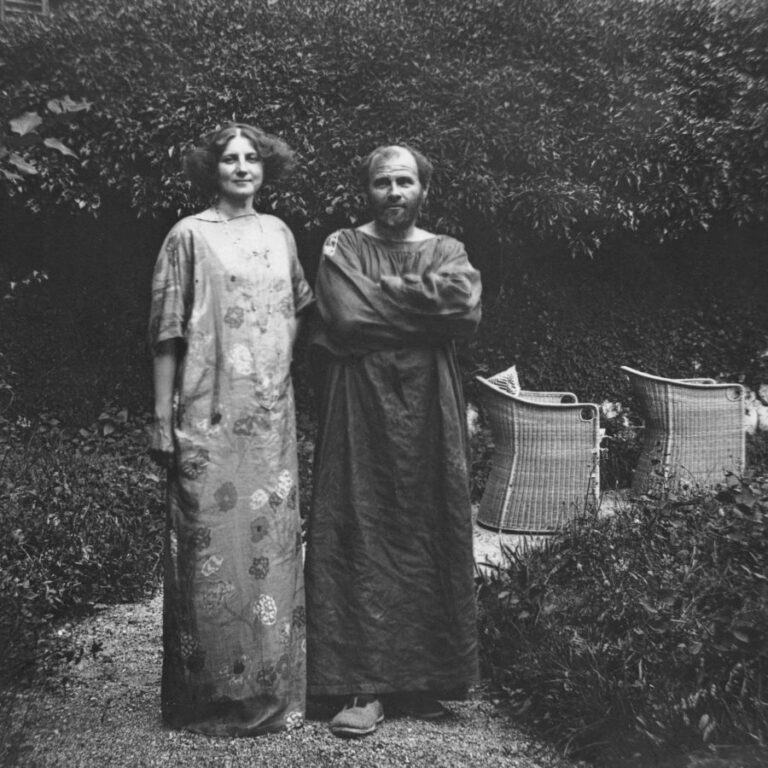 Gustav Klimt and Emilie Flöge were inseparable for years. Although it was never proven that there was something romantic between the two of them the story of their relationship (friendship only?) lasted for 27 years, until Klimt’s death. Klimt was a famous womanizer. He never married but he fathered at least fourteen children. And, he lived with his mother until her death, only only three years before his own. So what was about him and Emilie Flöge?

Emilie Flöge was a member of the Viennese bohemian and Fin de siècle circles. She was a successful business women. With her sister she run haute couture fashion salon they called the Schwestern Flöge (Flöge Sisters). Outside of her haute couture salon, Emilie had a more rebellious taste for fashion that conventional society wouldn’t and couldn’t understand at that time.

In 1891, Helene, the older sister of Emilie, married Ernst Klimt, the brother of Gustav Klimt. When Ernst died in December 1892, Gustav was made Helene’s guardian. At that time Emilie was eighteen years old and Gustav became a frequent guest at the home of her parents, spending the summers with the Flöge family at Lake Attersee.

The salon of Flöge became the leading fashion addresses for Viennese society. With its interiors designed in the Wiener Werkstätte style by Josef Hoffmann and Koloman Moser, quickly became a successful enterprise with wealthy clients who were committed to modernity in all its forms. Many of these women, such as Sonja Knips, Hermine Gallia
and Eugenia Primavesi, were also patrons of Klimt.

After 1891, Klimt portrayed Emilie in many of his works. Some art historians even believe that his famous “The Kiss”(1907–08) shows the artist and Flöge as lovers.

The portrait below was painted when Flöge was twenty-eight years old. Emilie’s dress is typical Reformkleider, the artistic free-flowing clothing that offered a radical alternative to the strictures and corsets of conventional fashion of the day. The sumptuous fabric covered with ornamental spirals, gold squares and dots is offset by the geometric pattern of the bodice, a motif presaging Wiener Werkstätte design. This chequered motif was features in a number of dresses worn by Flöge.

It seems that the relationship between Gustav Klimt and Emilie Flöge may have begun as infatuation but it matured into a close relationship that was intellectually and emotionally intimate rather than physical.

What’s interesting, nearly 400 written documents sent by Klimt to his life’s companion Emilie Flöge survived. Some of them are just postcards sent to Emilie from Klimt’s journeys.

Klimt died from a stroke on 11 January 1918. His last words reportedly were, “Get Emilie”. She inherited half of Klimt’s estate, the other half going to the painter’s family. After Klimt’s death Schwestern Flöge continued to operate until 1938, when the salon closed after the Austrian Anschluss to Nazi Germany. Flöge never married and she died in 1952. Unfortunately, in the final days of the Second World War, her house in the Ungargasse caught fire, destroying not only her collection of garments, but also valuable objects from the estate of Gustav Klimt.