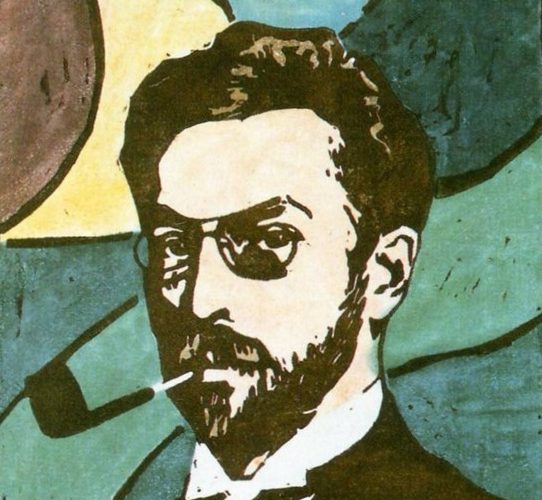 Wassily Kandinsky (1866-1944) was a Russian artist considered to be one of the pioneers of abstract art. He also worked as a theorist, publishing throughout his lifetime several books on art and color theory. Now we remember him as one of the greatest avant-garde artists of all time.

Born in Moscow, he enrolled to study law and economics to become a lawyer. Despite this, Kandinsky experienced a change of heart and began taking art classes relatively late in life at the age of 30. In 1896 he enrolled at the Munich Academy and was elected a few years later as president of the first modernist secession, Neue Künstlervereinigung München (N.K.V.M), which paved the future of modern art in 20th-century Germany.

After a couple of exhibitions, Kandinsky resigned from N.K.V.M. and founded with Franz Marc (1880–1916) Der Blaue Reiter (The Blue Rider). Although it lived a short life (1911–1914), Der Blaue Reiter was an art movement fundamental to Expressionism. Within the group, artists experimented with modern art, adopting a more intuitive approach to painting that drew its inspiration from music and the connection between visual art and spirituality. It’s unclear whether the movement was named after Kandinsky’s painting featuring a horse rider sprinting through a rocky meadow, The Blue Rider (1903). 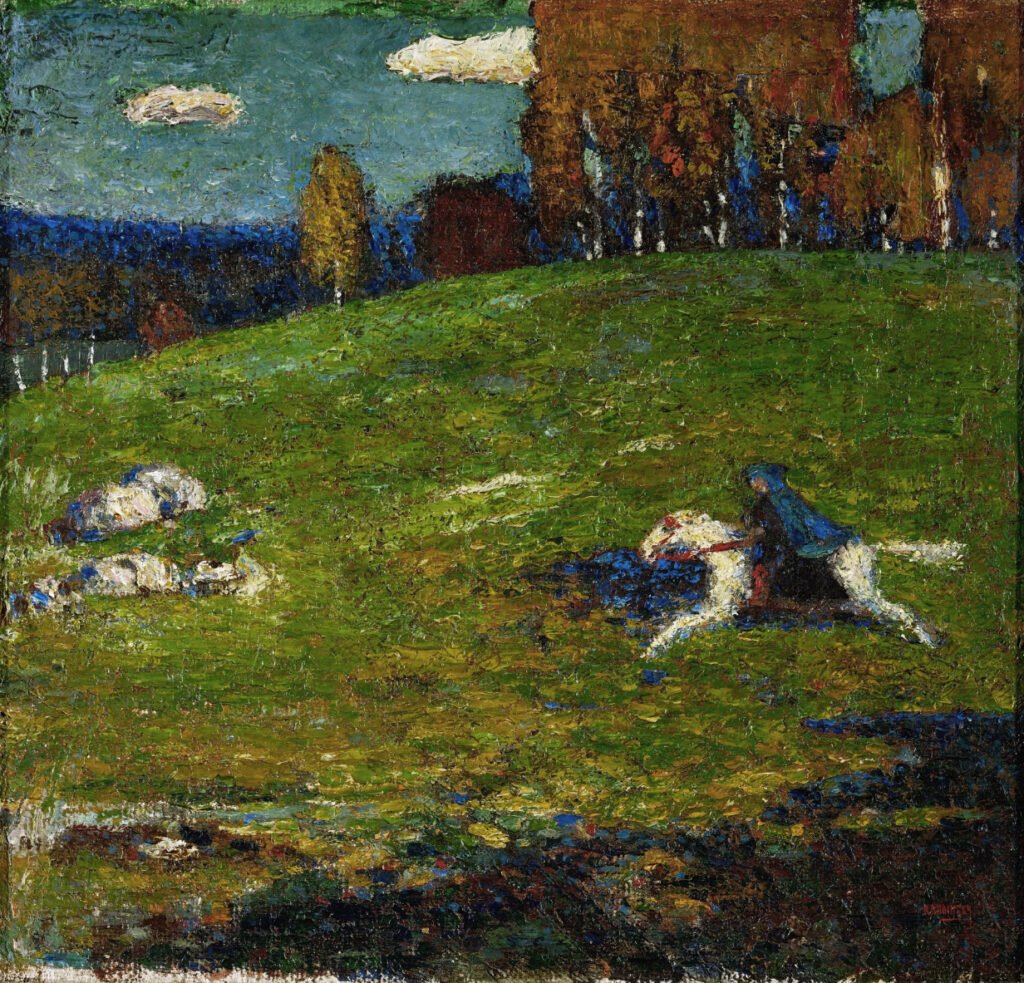 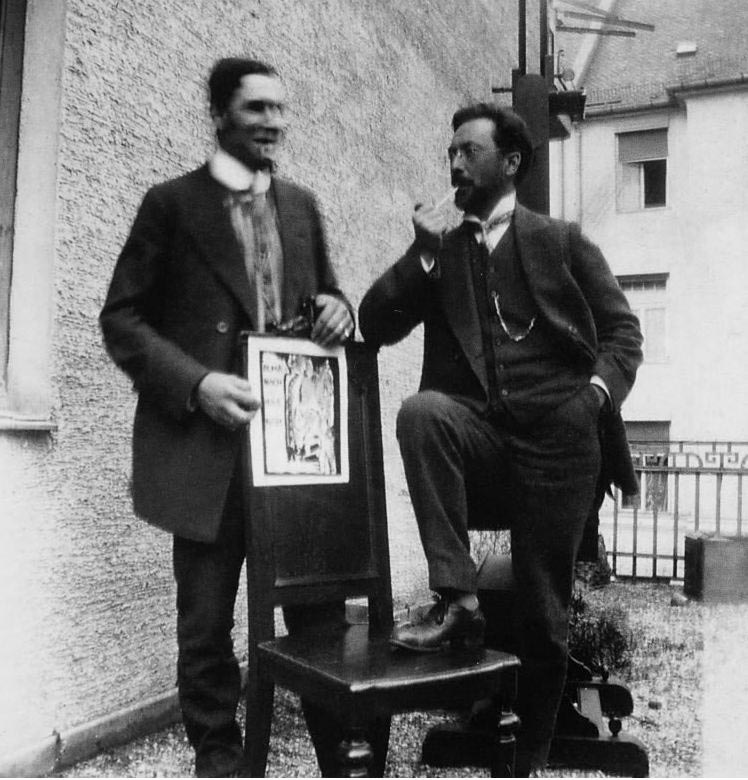 Photograph of Kandinsky and Marc, 1911. wassilykandinsky.net. 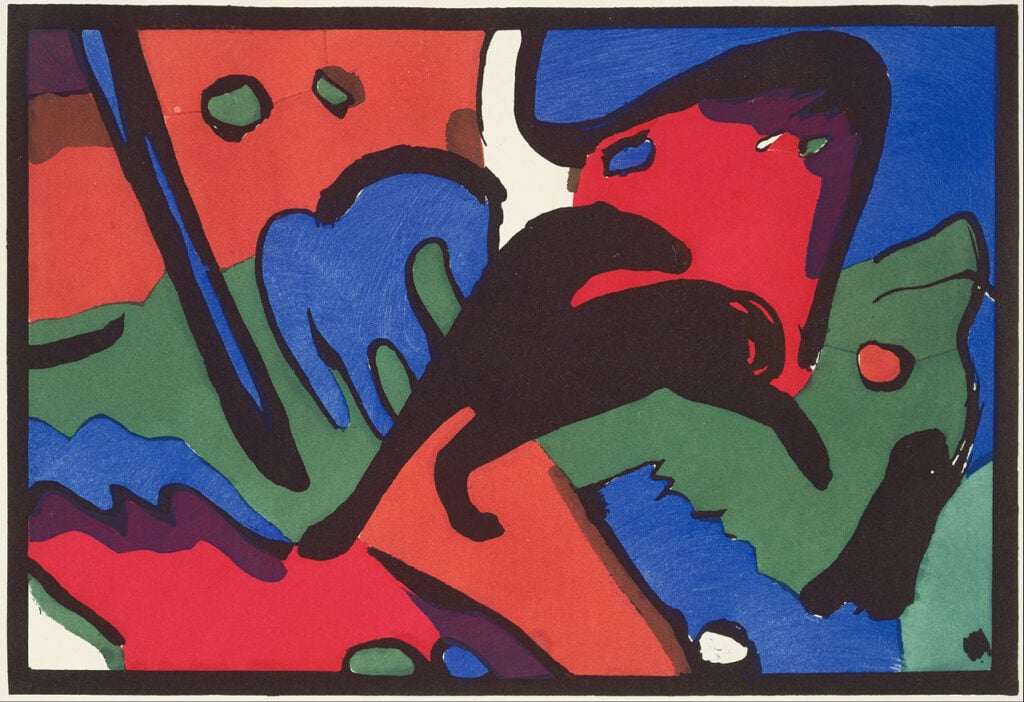 Der Blaue Reiter was an art movement fundamental to Expressionism.

After a couple of exhibitions, Kandinsky resigned from N.K.V.M. and founded with Franz Marc (1880–1916) Der Blaue Reiter (The Blue Rider).

Within the group, artists experimented with modern art, adopting a more intuitive approach to painting that drew its inspiration from music and the connection between visual art and spirituality.

After the outbreak of World War I, Kandinsky moved back to Moscow. Unlike other Russian artists from that period, who favored Suprematism and Constructivism, he focused more on his distinctive abstract vocabulary. Kandinsky returned to Germany in the 1920s to teach advanced theory at the prestigious art school Bauhaus, and organized painting classes and workshops. Sadly, after the rise to power of the Nazi regime, Bauhaus was dismantled and Kandinsky moved to France, where he stayed until his death in 1944.

This Wassily Kandinsky’s abstract painting reaches some impressive dimensions, 200 x 300 cm precisely. Out of the ten paintings entitled Compositions Wassily Kandinsky created between 1910 and 1939, only seven survived after World War I.

A pinnacle of Kandinsky’s Blue Rider period, Composition VII stands as the embodiment of spirituality and musicality in a single, great abstract masterpiece. The artist believed that only abstract forms render the true essence of the soul. By giving life to the trumpeting angels, a horseman, and Elijah’s chariot of fire, Kandinsky resurrects the apocalyptic theme from his previous works and sketches; for this artwork alone, he created over thirty preliminary sketches. Only the viewer gifted with a distinguishable imagination can perceive the subtle religious connotations. However violent and daunting, Composition VII strikes a sense of cosmological harmony and strength.

Living in Munich at the time, Kandinsky published in 1910 the book Concerning the Spiritual in Art. His intimacy with the subject is sensed firsthand in his work. Nevertheless, in the book, the artist introduces three different types of artistic inspiration. The first one, “impression”, reflects the outside world, while “improvisation” and “composition” struggle with the unconscious and inner expression of art. Being aware of his changing reality, Kandinsky shaped through his prophetic visions the future of abstract art.

Upon closer inspection, music is intrinsic to Kandinsky’s work. Just consider for a moment the chosen titles for Wassily Kandinsky’s abstract paintings (Composition, Improvisation, Impression); classical music enthusiasts will find these familiar, right? As a matter of fact, he created some of his impressions after hearing a particular piece of music. Kandinsky was also a close friend of Arnold Schoenberg (1874-1951), the renowned Austrian composer.

The artist was predisposed to a kinaesthetic sense of color. Defined by sharper and more analytical lines, Composition VIII reflects a clear shift in perspective from the previous Compositions. In contrast to the ludicrous color arrangements from Composition VII, the mathematical geometric elements in this painting convey a different emotional significance. While the corners of the painting are warm and inviting, the cold lines are more restrictive and rigid. The motif of the circle is later reproduced in his other artworks as a symbol for spirituality. This painting was bought by Solomon R. Guggenheim in 1930 when he visited Bauhaus.

In Yellow-Red-Blue (Gelb-Rot-Blau), Kandinsky plays more vividly with color tones, choosing a palette mainly composed of contrasting primary colors. Against the canary-yellow background, a dashing splash of purple emerges from the bottom of the canvas. The artwork is well balanced, featuring two focus centers: the left side is dominated by sharp angles, while the right side describes darker circular shapes. During his Bauhaus period, Kandinsky started paying more attention to the position of his geometrical elements in his compositions and the resulting effects. Yellow-Red-Blue is an almost kaleidoscopic display of fireworks filled with passion and joy.

Kandinsky published in 1926 Point and Line to Plane, perhaps his most important text, in which he examined the relation between geometrical elements. His artworks from this period are the practical interpretation of the artistic theories he explores in his books. Impulsive, lively, and intriguing, Kandinsky’s style is slowly maturing over time.

Kandinsky once talked about his perception of circles in art:

The circle is the synthesis of the greatest oppositions. It combines the concentric and the eccentric in a single form and equilibrium. Of the three primary forms, it points most clearly to the fourth dimension.

In this artwork, Kandinsky limits himself to only one shape: you’ve guessed it, the circle! Unlike other Kandinsky’s – that touched upon various religious themes – Several Circles does not hide any objective connotations, existing only as pure abstract art. In the artist’s view, colors have the power to instill different feelings and impact the soul. Not aggressive nor silent, the circles are characterized instead by a calming assertiveness. Kandinsky deliberately arranged them in a harmonious order to emphasize the expressive nature of abstract art and create depth through the dark background. What I admire about abstract art and, in particular, Kandinsky’s work is that the individual viewer has the liberty to attribute personal meaning to the art. For example, Several Circles makes me think of a distant and exciting extra-terrestrial planetary system. What about you?

Kandinsky left Germany in 1933 and moved to an apartment in Paris, France. During the last years of his life, Kandinsky’s style evolved significantly, managing to incorporate elements from all of his previous artistic periods (Great Synthesis). He gave birth to a series of novel non-geometric biomorphic forms that resemble microscopic organisms and introduced a new technique in his work to create a granular texture by occasionally mixing sand with his paint. His other masterpieces from this period include Dominant Curve and Composition X.

Composition IX is the penultimate Wassily Kandinsky’s abstract painting titled Composition. The wide exotic bands of color in the background offer dynamism and organizational peace, whereas the center of the composition, outlined in black, resembles a human embryo. Nonetheless, the rest of the overlapped shapes render an organic experience, and, just like in music, Kandinsky illustrated the contrast between tension and release, forte and piano, allegro and andante. Supposedly, the artist painted this Composition with only one preliminary sketch. He was able to transpose seamlessly onto the canvas his imaginary visions; truly impressive.