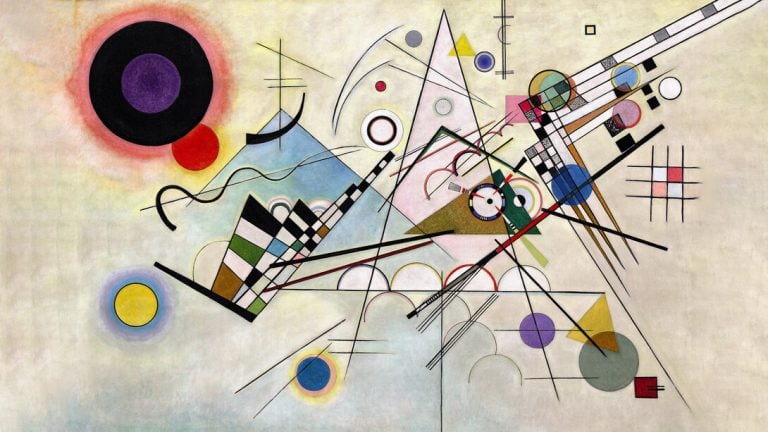 Synesthesia is a neurological condition in which a perception from one sense evokes sensation in another one. In the art world, there are works that reproduce this phenomenon and artists who experience it themselves. Are you ready to fuse your senses? Discover everything about synesthesia in art!

Synesthesia is a neurological (non-pathological) condition in which information meant to stimulate one of the senses stimulates another one (or rarely more than one). The phenomenon interested the ancient Greeks, who therefore gave it its actual name. The term comes from syn, meaning together, and aisthēsis, meaning sensation.

Synesthesia can theoretically bind any two senses, but the most commonly involved are hearing and vision. In other words, when you hear a tone or a melody, you could clearly perceive colors and shapes “in your mind.”

Anyone, not only artists, can experience synesthesia. However, only 4-6% of the general population seems able to feel it, and scientists estimate that it is definitely more common in artists in general. Experts believe that this condition may be due to special connections between different cerebral areas. A person like this is a synesthete.

The physicist Isaac Newton tried to create a mathematical system to explain the link between sound and color, but without success. He even influenced the basis of the color wheel, by assigning musical notes to it. Scientists are not yet able to clearly explain why some have this special ability and others do not.

Following the neurological context, the term has been used in literature. Here it defines a rhetorical device that tries to simulate the same cerebral condition. An example could be “the smell of red strawberries” (from the poetry Il gelsomino notturno by Italian poet Giovanni Pascoli) – you do smell strawberries, but not their “redness”. In the same way, we sometimes even refer to synesthesia in everyday life when we say “their voice was smooth”, or “this wine tastes round in my mouth”.

This term is not new in art either. Historically, the locution “synesthesia in art” gathers a large number of works by artists who were fascinated by the connection between senses.

The meaning in art is similar to the original neurological one, but it is not perfectly overlapping. In fact, in the art world synesthesia is generally defined as the perception of at least two stimuli from different modalities as a single, global experience, at the same exact time.

Moreover, a clarification is necessary in the context of this theme. Synesthesia in art or synesthetic art can express in two modalities. On the one hand, there is art created by synesthetes, i.e. artists themselves experience synesthetic perceptions (like musician Duke Ellington) and they use it (or not) to create artworks. On the other hand, artists can conceive a particular work of art in order to try and evoke a synesthetic experience in the viewer, even if they are not synesthetes.

The two modalities can come together. An artist who is a synesthete would produce pictures or melodies to evoke synesthesia in others.

As previously said, the most common form of synesthesia is the association between sound and color. This is why the majority of synesthesia in art is based upon it and has a more specific name, chromesthesia.

There are musical paintings, e.g. visual works that are based on and evoke music. The most famous musical paintings are probably those by Wassily Kandinsky. He may not have been a synesthete himself, but he was extremely interested in the system of correspondences between colors and the timbres of specific musical instruments and tried to reproduce them in artworks. However, the whole construction was based only on his personal perceptions, feelings, cultural environment, and influences.

The first sign of this interest was in titles. Kandinsky generally used suggestive titles for his artworks, which alluded to music. Moreover, he always looked for expression of contrasts both in titles and in artworks themselves, often through synesthesia.

A typical example is the painting Opposing accords (Gegenklänge). The title recalls sounds, and at the same time underlines contrast. Then, the picture itself evokes opposites and specifically contrasting tunes. According to the artist, an artwork should express an equilibrium of tensions in order to produce the desired effect or “maximal sound” through the opposition of elements. First of all, the contrast is between the two circles, one on the left and one on the right. Secondly, the audience can perceive opposition while looking at yellow and blue in the upper circle, which in turn opposes the zig-zagged line at the bottom.

Another, similar realization of synesthesia in art, also by Kandinsky, is Impression III (Concert). This musical painting was created after the artist had participated in a concert by the composer Arnold Schönberg. Kandinsky was so thrilled by the energy and the harmony of sounds he had heard that he decided to convey these impressions on canvas, in order to allow others to perceive the same. The composition is once again based on shapes and vivid opposing colors, with a sketch of a piano and an audience.

A more recent work able to evoke synesthesia-like perceptions is the famous Disney movie Fantasia. Iconic melodies are translated into images, so they almost fuse together and the two senses collaborate in evoking a global experience.

Aleksandr Scriabin was a Russian composer and musician. He was initially influenced by his colleague Frédéric Chopin, and in the following years he created a new musical language, linked with his philosophical beliefs, in which colors were also included. In particular, synesthesia influenced him, and he associated colors with the various harmonic tones of his atonal scale. He probably was not a synesthete, but constructed these personal associations in a formal way, also relying on the aforementioned attempts by Newton.

What About Other Senses?

The first experiment ever made to try and evoke links between hearing and seeing appeared in the 16th century. The involved artist was Giuseppe Arcimboldo. He pasted colored pieces of paper on each key of a musical instrument similar to a keyboard. In this way, he wanted to stimulate the association between a tone and a specific color. He had become famous for his paintings in which he represented portrait heads made entirely of common objects, in particular food – fruits, vegetables, flower, and fish. You globally see a face, but you also perceive the edible details. Do you perceive the taste of peaches, grapes, or fish? If yes, he (involuntarily?) evoked weird synesthesia in you: the link between vision and taste!

As said, although they produced synesthetic art, it is still not certain that Kandinsky and Scriabin were synesthetes. The question is still under debate. Only in recent years have neuroscientists found how to objectively evaluate if someone really experiences synesthesia. Therefore, the only artists that are definitely synesthetes are contemporary ones, and we will cite some examples. However, through the analysis of documents and letters, some artists who lived before this neuroscientific discovery can be supposed to have been synesthetes.

One of these is Vincent van Gogh. In 1881, he wrote a letter to his beloved brother Theo in which he stated that some painters had a majestic quality, i.e. the ability to use their hands with the virtuosity of a violinist. He also believed that their artworks were “pure music.” These sentences evidently underline the association of color and music in Van Gogh’s mind. The point became even clearer in 1885, when he decided to study piano. The experience quickly failed because after a few lessons Van Gogh stated he felt weird – every note evoked a precise color in him. His teacher, concerned about this reaction, refused to continue the course and declared him insane.

Although he was a synesthete, his artworks are not immediately synesthetic. Nevertheless, some observers claim to hear the voice of joy and hope when looking at his yellows.

Among contemporary artists, Carol Steen, a New York-based artist, writer and curator, experiences multiple forms of synesthesia, including grapheme-to-color when she reads letters and numbers, music/timbre-to-color when she listens to music, and touch-to-color synesthesia when she feels pain or is under acupuncture treatment.

She creates her artworks through her synesthetic experiences, in particular music-to-color and touch-to-color. Besides trying to capture and transmit her unique perceptions into her paintings, and therefore to observers, she has always been involved in spreading the knowledge of this phenomenon to others. For example, she is a co-founder and an important member of the American Synesthesia Association and collaborated in publishing a book on the topic in 2008.

Vision is a painting accurately reproducing what she saw while being stimulated in acupuncture treatment.

Anne Salz is a Dutch artist in the fields of music and visual arts. She mainly perceives music in colored patterns. One of her most famous works of art is Vivaldi, which she herself describes as created while listening to Vivaldi’s Concerto for Four Violins. It is a yellow-orange pattern with regularly positioned darker diamonds in it. She clarified that each of her works is not a faithful representation of what she hears; rather, when she listens to music, more colorful textures than usual come to her mind.

Specifically for this painting, she states:

The painting evokes my feelings again when I listen to the music again. I hear the melodies in my mind when I look at it.

Anne Salz, quoted in Creations of a Synesthete.