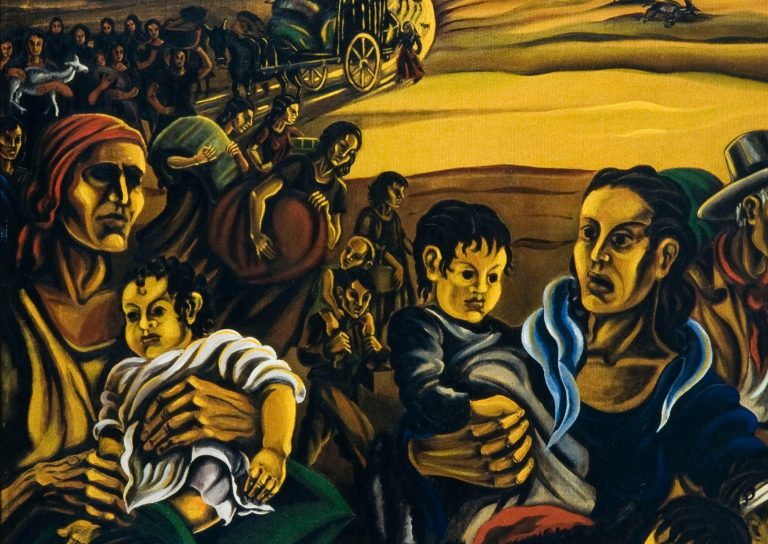 Remarkable Romani – Astonishing Works By and About the Community

Romani artist Helios Gómez produced some of the most striking Spanish avant-garde graphics in the first half of the 20th century. However, he also painted tragic events in his own country, so we are taking a closer look at his heart-breaking Evacuation painting. This image is from 1937, but is just as pertinent today as refugees seek safe havens across the globe.

Helios Gómez was born in the Triana quarter of Seville, Spain. His family was Romani, from rural Andalusia and he was immensely proud of his origins. Politics was always close to his heart and his art was his way of communicating his revolutionary ideals.

As a young man Gómez worked in ceramics factories where he first experimented with his artistic skills. As well as attending the School of Craft and Art, he became politically active with anarchists and communists, demanding a better life for ordinary working people. His trade union activities rapidly attracted negative attention from the authorities, but Gómez fought on.

Fighting Fascism in the 1930s

Brave as well as artistic, Helios Gómez fought in the Spanish Civil War, even gathering together a battalion of Romani men. It was a long, brutal war. Wounded and captured fighters were imprisoned in concentration camps, in squalid and cruel conditions. Gómez believed that this war was part of the fight against a wider problem that threatened the fate of Romani people everywhere.

From this war, which will produce so many great things, there must come even in Spain the vindication of the Roma.

Look at Gómez’s black and white prints and feel the strong influence of Expressionism. We also see signs of Cubism and the use of geometric patterns, but his painting style is very different. In the painting Evacuation, we see use of color similar to El Greco and as well as the stylistic influences of Francisco Goya. This is very much a “Spanish” painting. Its theme is global however, and we are reminded of events happening even today, with refugees fleeing from war-torn Syria and Ukraine.

Evacuation (Evacuación in Spanish) shows columns of refugees fleeing, their homes in flames behind them. Fear, exhaustion, and despair are etched on their faces. Women clutch children, their eyes are haunted. These eyes, having seen the horror of oppression and hatred, seem tortured. Tones of ochre, orange, and brown feature heavily for the land, the flames, and also the faces. The atmosphere is oppressive, desolate. This painting shows the human cost of fascism and ominously fore-shadowed a mass evacuation that took place just two years later in 1939.

Late January and early February of 1939 saw nearly half a million Spanish civilians and soldiers flee to France as refugees. All sought sanctuary from Franco’s brutal fascist regime. This huge migration is known as the Retirada (Spanish for Retreat). Furthermore, it was the biggest single influx of refugees ever known in France. The French were both unprepared and didn’t want a mass of foreigners entering their country, calling them “foreign undesirables”. Romani people were particularly unwelcome. Families were separated and imprisoned behind barbed wire with no food, water, or shelter. Dysentery and disease spread fast in the overcrowded, rat-infested camps. Tragically, any Romani who managed to survive until the German Occupation of France was likely to be exterminated in Nazi gas chambers.

Escape from torture and hunger in the French and Algerian concentration camps came in 1942. Gómez managed to get passage to Spain, where he threw himself back into the fight against Franco. He helped create a secret resistance organization, Liberación Nacional Republicana (Republican National Liberation). In 1946 he was arrested again and was jailed for eight years, without a trial or conviction. He was released in 1954, but sadly died just two years later.

While in jail, in 1950 Gómez painted a series of frescos directly onto his cell walls. These honored prisoners and also the Virgin Mary, patron saint of prisoners, as well as the city of Barcelona. It is said that they were beautiful. However, it seems the prison authorities were not happy with the interest they created and the Capilla Gitana (Roma Chapel) was cruelly destroyed, despite opposition. Only a few tantalizing photographs remain.

Challenging the stereotypical cliché of the lazy, criminal Romani was an obsession for Gómez. He dreamed of a fairer world for the Roma, their full integration into social life, and the recognition of their cultural values. However, like many Romani activists, Gómez’s life was full of persecution: he was arrested over 70 times by the authorities in several different countries.

As refugees seek solace and safe haven across the globe, both as our near neighbors and as flickering images on our television screens, perhaps we can look back to Gómez, and know that although the fight is hard, the alternatives are unspeakable.

ERIAC and the Roma Archive  both contain a wealth of information on Roma artists.