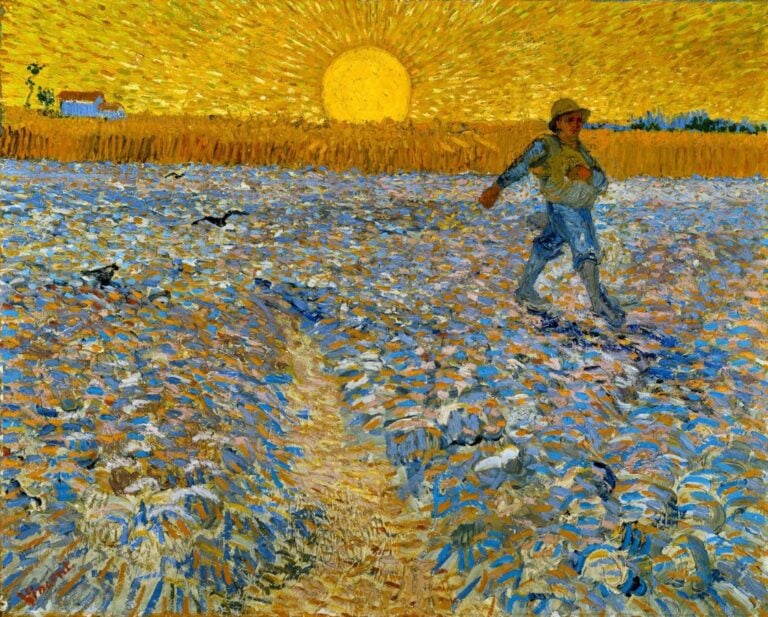 Imagine, you are in a forest. In the middle of this forest there is a museum with a garden full of sculptures. Both the museum and the garden are filled with the most amazing artistic masterpieces. Sounds like a dream? Well, I have some good news for you - this place actually exists. It is the Kröller-Müller Museum in Otterlo, The Netherlands, and it's located in the middle of the Hoge Veluwe National Park. As it is one of my most favorite museums in the world, I have listed 5 reasons why the next time you are in The Netherlands, you should go into the forest and visit the Kröller-Müller Museum:

1. It holds the second-largest collection of Van Gogh paintings in the world

The museum has a considerable collection of paintings by Vincent van Gogh, such as Cafe Terrace at Night, Sorrowing Old Man ('At Eternity's Gate') and a version of The Potato Eaters, making it the second-largest collection of Van Gogh paintings in the world, after the Van Gogh Museum in Amsterdam. The museum owns almost 90 paintings and over 180 drawings created by Vincent.

Why on earth do they have so many Van Gogh's?

The first major, successful, and visionary collector of Vincent Van Gogh's paintings was Helene Kröller-Müller, born 1869, and married to a wealthy industrialist. In 1935, she donated her whole collection to the state of the Netherlands. It is thanks to Helene that we can visit such a great art collection.

2. It has a magnificent collection of 19th and 20th century classics

3. The Museum was designed by Henry van de Velde

Helene dreamt of her own ‘museum house’, where she could share her love of modern art with everyone. The design was by Belgian architect Henry van de Velde, who is considered to be one of the main founders and representatives of Art Nouveau in Belgium. Van de Velde spent the most important part of his career in Germany and had a decisive influence on German architecture and design at the beginning of the 20th century.

4. It has probably the best sculpture garden in the world

The Kröller-Müller Museum is also famous for its large sculpture garden, within the forest park, of more than 75 acres (300,000 m2). It has one of the largest collections of modern and contemporary sculptures in Europe. It was opened in 1977, along with the new exhibition wing, designed by Wim Quist. The garden reflects Helene Kröller-Müller's conception of the symbiosis between art, architecture and nature. The collection includes works by Auguste Rodin, Henry Moore, Jean Dubuffet, Mark di Suvero, Lucio Fontana, Claes Oldenburg, Fritz Wotruba, Joep van Lieshout and many more.

5. It has awesome educational programs

The museum has also created educational materials that are available in English. You can download them from the museum's web page and you can use them as preparation for your visit to the museum. Some of the materials are designed for kids, like the detective game - and they are truly awesome. To find out more about the Kröller-Müller Museum's educational activities, you can read an article that we published on how the museum encourages visitors to philosophize with sculptures.

Read more about the Kroller-Muller Museum and Collection: