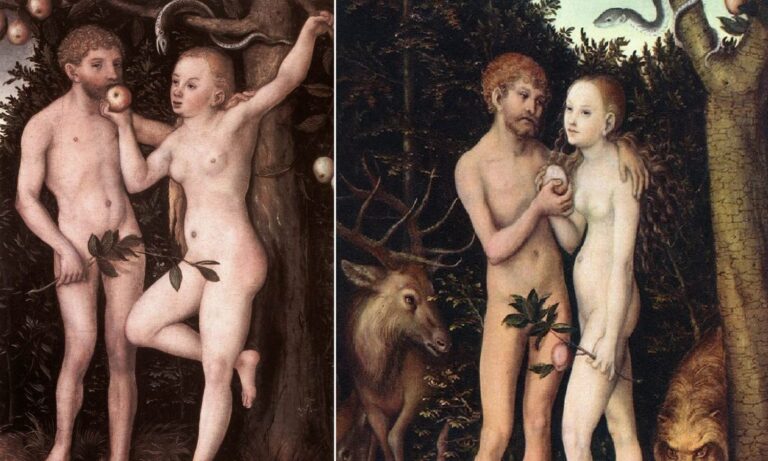 Do you like games? Your mission in today's game is to identify seven differences between the artworks of Lucas Cranach the Elder that I chose from his series. While you discover the differences, I tell you a little about this interesting German painter. Enjoy!

Lucas Cranach the Elder (1472-1533) was a Germanic painter: having been born as Lucas Sonder, he adopted the name of his hometown, Kronach, and from an early age he practiced the art of painting, which he had learned from his father. In the early 1500s, he attracted the attention of Frederick III of Saxony and became court painter in 1504. At the time of Cranach, the practice of making variations on the same theme was completely normal. Among the recurring themes in Cranach's work, we find a typical emphasis on biblical and mythological subjects.

The Judgment of Paris

Let's start with a mythological painting. The Judgment of Paris was produced in different periods of the painter's career. Dressed as a warrior (in myths he is described as a shepherd), Paris must decide which goddess is the fairest: Juno, Minerva or Venus. Each lady promises him something, and at the end, he picks Venus who in return promises him Helen, the most beautiful woman on Earth. Mercurio also appears in the scene, which is probably just a dream of Paris. Among all the differences between these two paintings, the one that most catches my attention is the look of the figures represented. While in the first painting everyone seems rather distracted, in the second there are glances that directly face the observer. [caption id="attachment_13386" align="aligncenter" width="1225"]

The sisters, goddesses of beauty, are a recurring subject in the Renaissance painting and they have much prominence also in Cranach's work. His Three Graces have very young bodies, almost adolescent looking. The position of the girls is invariable, and the background is the same as well. It is estimated that Cranach and his workshop produced together about five thousand works of art in total, but the representations of these goddesses remain the artist's masterpieces. [caption id="attachment_13390" align="aligncenter" width="1091"]

And speaking of the goddess, Cranach also dedicated a series of paintings to Venus. This scene catches my attention for a particular reason: look at the little Cupid, he decides to steal honey. It is a bad idea as the bees attack him and he begins to cry for his mother. It's an important lesson for all the carefree out there: pleasure and pain go together. In addition, the bees' stings can be compared to the pain that the little god inflicts on gods and mortals with his love arrows. [caption id="attachment_13392" align="aligncenter" width="1135"] 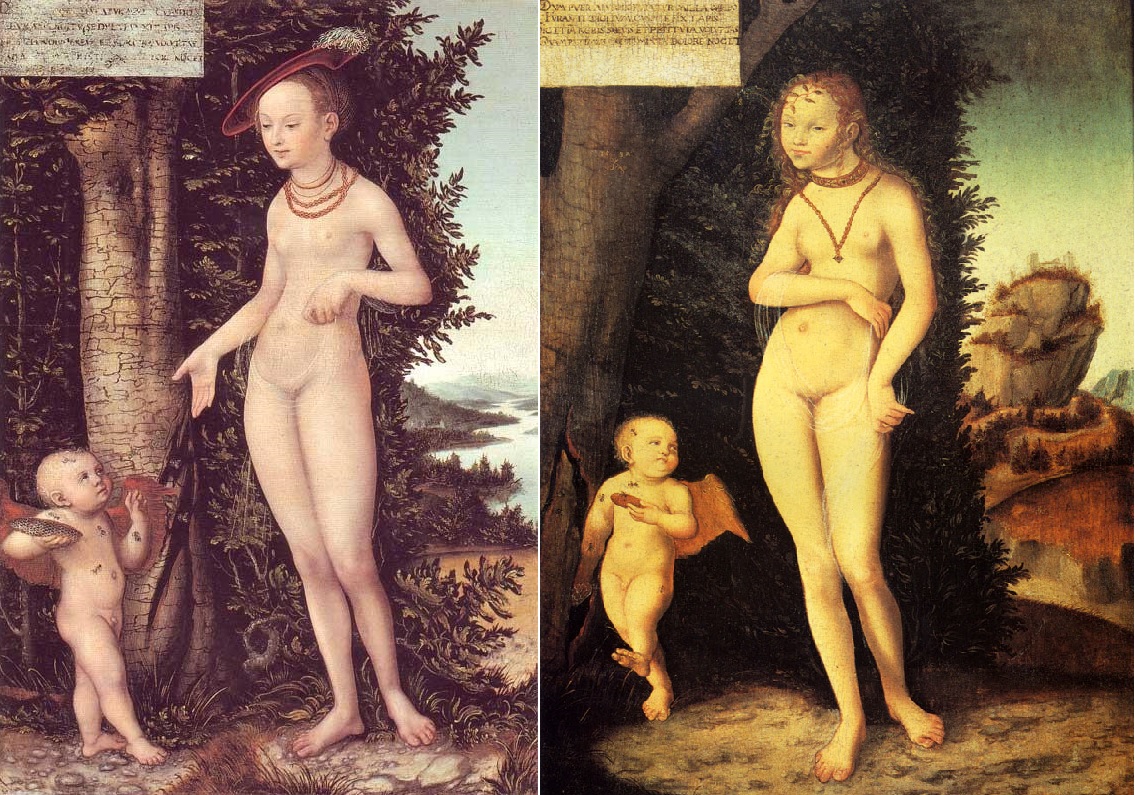 The biblical story of the Fall of Man also had a place in the works of Lucas Cranach. The artist made several pictures on this theme, sometimes with animals in the background, sometimes with a totally dark and plain background. The position of Adam and Eve also changed from one to another: sometimes they stand apart, sometimes they are embraced. But the tree of forbidden fruit and the snake are always present in the scene. [caption id="attachment_13389" align="aligncenter" width="1247"]

Lucas Cranach the Elder, Adam and Eve, left: 1528, Uffizi Gallery; right: 1525, Royal Museums of Fine Arts of Belgium[/caption] In addition to these works, the artist also painted portraits and you may remember the famous portrait of Martin Luther who was his in fact friend. Lucas Cranach also made woodcuts and altarpieces and was an extremely prolific artist. I hope you have enjoyed seeing the differences between these paintings and if you want to see another work of Cranach you can read this article.