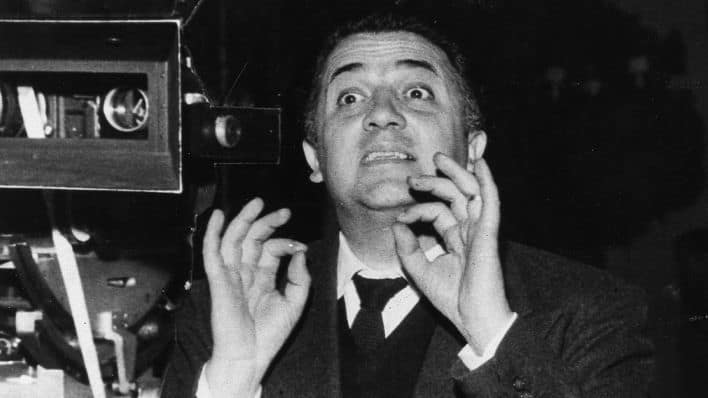 Federico Fellini is one of the greatest and most influential filmmakers of all time. He created a unique style based on fantasy, dreams, extravaganza, Surrealism, decadence, satire, and bizarreness. However, it is less known that before he started to make movies, he was a busy caricaturist. Later, the love for drawing had a huge impact on his filmmaking process.

Federico Fellini drew his first caricatures when he was in high school. The manager of the Fulgor cinema in Rimini hired him to draw portraits of Hollywood stars to promote movies. Therefore, in exchange for these drawings, he received movie tickets. Consequently, a lifelong interest in graphic and cinematic imagery developed. From 1938, he started collaborating with Domenica del Corriere, which published his cartoons, and with the comic publication 420.

In 1939, Fellini moved to Rome to study law in order to please his parents. There he joined the editorial staff of Marc’Aurelio, a famous satirical magazine. Gradually, he became highly popular thanks to hundreds of drawings and his regular column But Are You Listening? Also, this job gave him the opportunity to meet a lot of writers, gagmen, and scriptwriters. Eventually, these encounters led to opportunities in show business and cinema.

After World War II, Fellini abandoned comics and started directing movies. Firstly, he worked as a screenwriter and assistant director for Roberto Rossellini. Afterward, he directed his own pieces. Fellini frequently drew the characters of his movies before or during the shooting. It was a way of developing the character. He used the drawings to materialize his thoughts before they became moving images or to give instructions to his collaborators.

Why I draw the characters of my films? Why do I take graphic notes of their faces, of the noses, of the moustaches, of the ties, of the bags, of the way to cross the legs, of those people that come to visit me in the office? Perhaps I have already told that it is a way to start watching the film in face, to see the type it is, the attempt to fix something, even though minuscule, to the limit of the nothingness, but that seems to have something to do with the film, and covertly it speaks to me.

Fellini’s movies are characterized by multiple themes and an intentional artificiality in directing. They are often described as controversial, bizarre, without limits – between dreams, imagination, and reality.

Also, Fellini’s characters often have exaggerated, hypertrophied, and grotesque appearances. He often cast people with odd appearances and gave them prosthetics and make-up to make their faces even more unusual. Critics often blamed him for depicting people as walking caricatures. However, that was the only way for him to make the character just as he imagined them.

Although Federico Fellini used drawing mainly for developing his visions, he stayed connected to the comic world in other ways. In his movies, it is often visible that he drew inspiration from certain comics. Also, he had many collaborations with comic artists working on books, novels, and illustrations.