Hanna Hirsch-Pauli: Friendship Goals and Feminism in the 19th-Century Stockholm 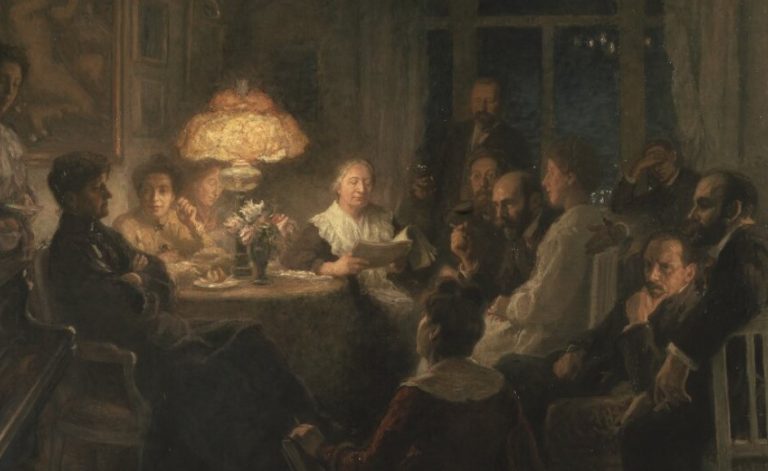 Swedish artist Hanna Hirsch-Pauli (1864-1940) is best known for her genre scenes and portraits. She studied at the painting school of August Malmström, and the Royal Swedish Academy of Arts. Then, she moved to Paris, where she met her husband-to-be, fellow artist Georg Pauli. They got married after their return to Stockholm in 1887. Together, they were members of the society called Junta, bringing together artists and intellectuals of Stockholm. They met regularly over drinks and food to debate and listen to readings.

The painting Friends depicts 11 friends gathered at Paulis’ home at Bellmansgatan 6 in Södermalm, Stockholm. Multiple studies and many changes in composition preceded the final version of this big format artwork (204 x 260 cm). Hanna Hirsch-Pauli presents herself as an observer in her own drawing room, pen and pad in hand, watching her friends. Sitting on the floor, below the table level, she makes the viewer see the scene from above her head.

It’s worth mentioning that at that time, painting women in their professions was not very common (which makes another artwork by Pauli, the portrait of the artist Venny Soldan-Brofeldt a real breakthrough). While Hanna Hirsch-Pauli pictures herself as an artist, her sister, Betty Hirsch is pictured as the hostess of the meeting. Standing on the left with a plate of fruit, she’s ready to serve the guests.

First on the left, sitting, is Olga Björkegren, a Swedish actor and opera singer. She runs a residence for young artists and an art gallery in her family villa together with her husband Klas Fåhraeus (first from the right), writer and art collector. Next to Björkegren sits Lisen Bonnier, the wife of Karl-Otto Bonnier (bearded with glasses, sitting in the center of the painting), a publisher for writers such as August Strindberg, Selma Lagerlöf and Hjalmar Söderberg and the originator of Junta. Karl-Otto Bonnier was a brother of Eva Bonnier, also an artist, and a good friend of Hanna Hirsch-Pauli.

Behind the lamp, we see Nanna Bendixson, a painter, married to a teacher Arthur Bendixson, sitting on the opposite side of the table. Interestingly, the depiction of Nanna in the final version of the painting differs from the studies, in which she had a more prominent position.

The change in the composition could follow Pauli’s decision to bring more attention to Ellen Key, reading in the middle of the painting. Ellen Key was a philosopher and feminist writer, one of the best-known cultural figures in Stockholm at the time. She was a suffragist and an advocate of child-centered parenting and learning. Key maintained that motherhood is so crucial to society that the government, rather than their husbands, should support mothers and their children. Her thoughts on love, parenting, marriage, and sexuality influenced generations around the turn of the 20th century. Privately – a friend, mentor, and an important source of inspiration for Pauli.

Georg Pauli, Hanna’s husband is standing next to Ellen Key. Further, Richard Bergh, a painter with his arm around his wife Gerda Bergh. The last friend, at the back of the room, remains anonymous.

All the people depicted in the painting sit very close to each other, which symbolizes the close-knit community they formed, also the power and importance of friendship. And while the setting remains private and informal, the depicted individuals were, in fact, the cultural elite of Stockholm, contributing to many artistic and intellectual breakthroughs of the time.

This article was published in cooperation with Europeana, Europe’s platform for cultural heritage. To learn more about remarkable European women in the arts, sciences, and society, visit the online exhibition Pioneers.