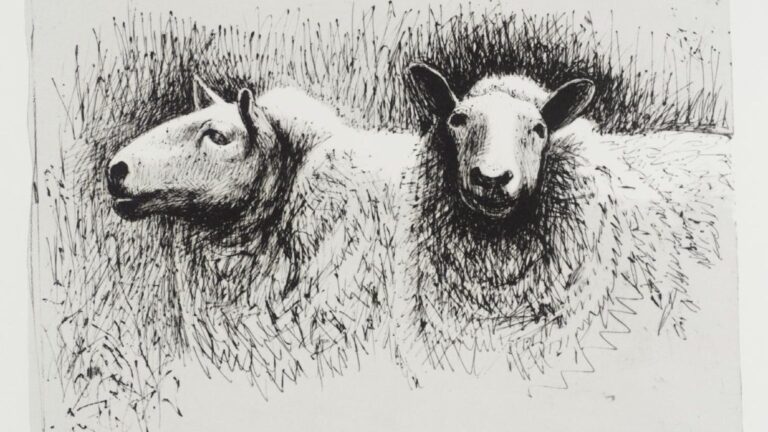 Henry Spencer Moore was an English artist. Although his primary role was as a sculptor, there are lots of examples of his sketches. His forms are usually abstract human figures, often depicting mother-and-child or reclining figures, but some of the drawings depict animals, for example, sheep.

Henry Moore often sketched ideas for his sculptures in pencil, charcoal, color washes, and even ballpoint pen. But have you ever taken a close look at his sketches of sheep? Like the sculptures, these drawings of ewes and lambs look closely at form and texture. And like the sculpture, they seem to form part of the very landscape they inhabit.

Moore lived in Much Hadham, a small village in East Hertfordshire, and worked in a studio overlooking a sheep field. It was whilst working in this small room that Henry Moore first became aware of the sheep grazing outside. He began to draw them, exploring the way they moved and the shape of their bodies under the fleece. He drew a ewe and lamb – a large form sheltering a small one – which is an important theme in his larger sculpture work.

Apparently, in order to capture the sheep’s faces in very intricate detail, Moore would make a small, sharp noise to grab the sheep’s attention so that they would turn to look at him.

I live deep within a sheep farming country. The year is punctuated by the ancient ways of working the land. In September, farmers are checking the condition of their ewe, ready for them to join the rams and begin the mating game in October. This is traditionally known as “tupping”. Sturdy Welsh breeds like ours will over-winter in the fields around our home, and by April those cute, bouncy lambkins will start to appear.

The time Moore spent watching sheep from his window gave him an insight into the nature and temperament of the sheep. He saw the changes in them over the year. He drew them fluffy and fleecy and later drew them just after shearing time when he could see the fluid shapes of their bodies.

I watched a ewe standing between two big rocks the shape of goat’s cheeses. They were just far enough apart to allow the animal in, and I began to understand the relationship Henry Moore perceived between sheep and stones. He saw sheep as animate stones, the makers of their own landscape.

In 1972 Moore presented a large number of these sketches to his daughter Mary in a Sheep Sketchbook. These have since been published and distributed to a worldwide audience. Henry Moore died in 1986 but his work is timeless. Whether you are interested in sculpture, sketching, or sheep, these are well worth a look!