Pretty Women: Female Beauty and the Three Graces in Paintings 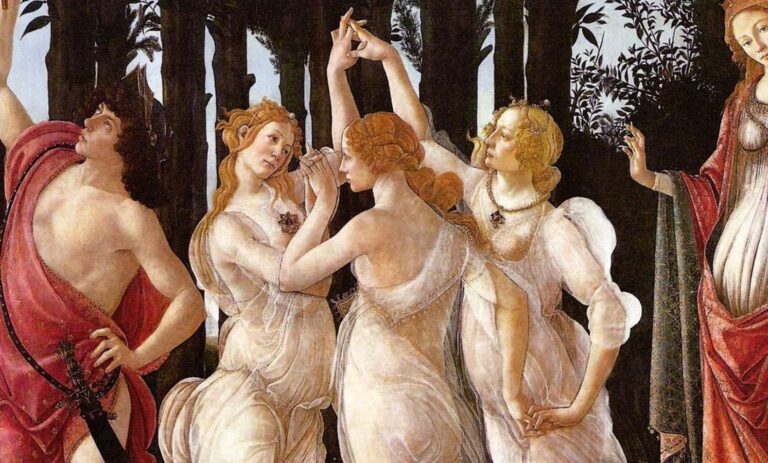 What Should We Look Like? Ask The Three Graces

The paintings depicting three Graces are present throughout all art history. Although the characters are the same, the representations change a lot over time. Our story begins with Greek mythology and travels through time with the three women who epitomized the ideal of female beauty for various artists over the centuries.

Everyone knows that Aphrodite (known as Venus to the Romans) is the goddess of love and beauty. In addition to being worshipped in temples of the ancient world, the irresistible goddess was also depicted by artists of all times.

But there were also other goddesses of love known as the Charites or the Graces. They were three girls that, according to the poet Hesiod, were daughters of Zeus and Eurynome, a sea nymph with whom the god of Olympus had a brief love affair.

The three Graces were called Aglaia, Euphrosyne, and Thalya, and they were always together. Besides love and beauty, the goddesses were also associated with goodwill, nature, creativity, fertility, charm, splendor, and joy, in other words, graces.

In some myths they appear on top of Olympus, singing and dancing with the Muses and Apollo; in others, they are always in the company of Aphrodite. By the way, when Aphrodite was born – from the foam of the sea – it was the three Graces who received and cared for her. When Aphrodite wanted to seduce Anchises, the only mortal with whom she had a child, it was again the three Graces who dressed her and perfumed her for the date. And even when the goddess was caught cheating on Hephaestus with Ares, and seen by all the gods, once again the Graces were there, to dress her and console her.

Despite the fact that, in myths, the three Graces have always appeared as the assistant of the goddess, in art they have become protagonists of countless works, from antiquity to the present day. And with that, they served to represent not only the mythological characters but also the ideal of female beauty of each period and for each artist.

The earliest representations of the three Graces appeared in mosaics and sculptures in ancient temples. Then, during the Renaissance the goddesses, as well as other mythological figures, became a recurring theme in painting.

Representing women as mythological characters was the only official way of representing the naked female body, otherwise, it would be too shocking for the common viewer. In Raphael’s painting, clearly based on ancient sculptures, there is an emphasis on the pallor and the indifferent gaze of the girls. Although their bodies are mature, the sexual organs are subtly displayed and the breasts are not exposed.

Lucas Cranach, like Raphel, portrayed the three Graces completely naked, but in his work, the goddesses do not hold symbolic attributes, like the apple or flowers. Instead, they have props (a hat and necklaces). Only one of the girls leans on her sister, unlike other paintings in which they are always holding each other’s hands.

The Three Graces of Raphael and Cranach have something in common: their bodies resemble teenage bodies. The ideal of beauty seems to reside precisely in the youth of the models.

A little different from Raphael’s depiction is that of the painter Rubens, who opted for more mature Graces, with not such firm bodies, and more opulent forms. Also, notice how their gazes intersect, perhaps suggesting a little more intimacy.

The composition, however, is practically the same. Two of the girls are seen frontally, while the other is represented from the rear.

Alessandro Varotari (Il Padovanino) alters this composition, placing two of the goddesses’ faces forward, while the third one turns her back on the observer. Though naked, girls wear veils, an element that is repeated in other Three Graces paintings.

About two centuries later, when mythological themes began to be reviewed, The Three Graces paintings continued to be created. The iconography, however, changed as it no longer showed realistic or anatomically perfect bodies, like in Raphael’s painting, the atmosphere was neither idyllic nor romantic, like in Varotari’s.

Koloman Moser, for example, revealed only the side of the body of each of his Three Graces, the skins of ochre tone and red veins. The composition, which is symbolist, does not present a garden or field as it was before.

In Moser’s painting, it was not only the structure of the composition that changed, but also the technique and, above all, the ideal of feminine beauty.

And speaking of changes in representation, Lawrence Alma-Tadema creates his version of The Three Graces by making use of a complex set of symbols.

In addition to representing the three figures in the center, the painter showed the other graces in the corners of the work (in the top left, for example, Law, Order, and Authority). As in the previous paintings, the women are very close, but Alma-Tadema only portrayed their faces.

At the beginning of the 20th century, when the European avant-garde movements were at their peak, the painter Robert Delaunay placed The Three Graces in the Villa of Paris. Although Delaunay fragments the characters, it is still possible to clearly see that he follows the same compositional structure as Raphael.

The Three Graces are a beautiful inspiration from much of what it is to be a woman. Although the characters are the same, the representations over time have changed a lot. Sometimes thin and with children’s bodies, sometimes more mature, naked or dressed, long or short hair… These paintings prove that the idea of beauty is dynamic and changes all the time. And that is where the paradox lies: the ideal of feminine beauty is not one ideal. Every woman has a particularity that makes her more beautiful. And that is the real Grace of being a woman.