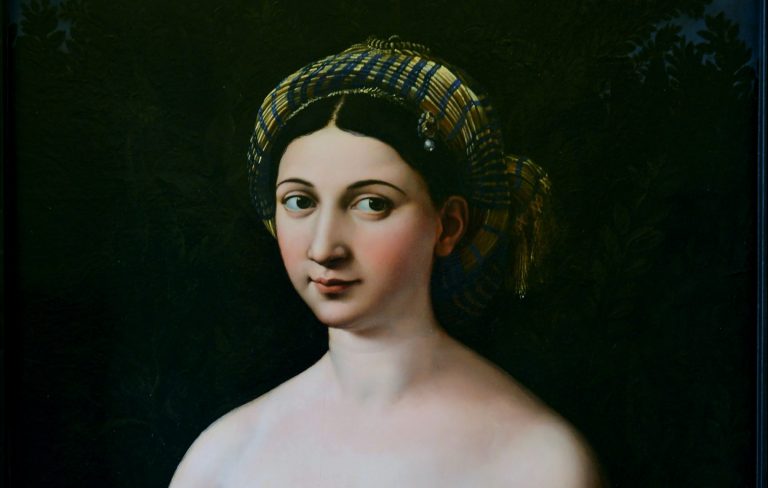 Margarita Luti is also known as “La Fornarina”, which means “the baker’s daughter”. According to legend, she was the mistress and model of Raphael. Read their story!

According to Giorgio Vasari, the leading gossip girl of Renaissance artists, Raphael was a “very amorous man and affectionate towards the ladies”. When commissioned by Agostino Chigi to decorate the Villa Farnesina, he was unable to dedicate himself properly to his work due to his infatuation – until the girl was allowed to come to live at his side. Again according to Vasari, it was Raphael’s immoderate indulgence in “amorous pleasures”, one day taken to excess, that brought on the fever which led to the young artist’s death in 1520, at age of 37.

Luti is not mentioned by Vasari but is named twice in 16th-century marginalia of the second edition of his Lives of the Most Excellent Painters, Sculptors, and Architects, beside the passage describing La donna velata: “portrait of Margarita, Raphael’s mistress … Margarita”.

In a letter of 1806, Melchior Missirini recounted the tale of their first meeting, of how Raphael fell in love with “La Fornarina” after watching her as she bathed her feet in the Tiber in the garden beside his house in Trastevere, only to discover that “her mind was as beautiful as her body”. Missirini was known for his “pseudo-traditions” and fake stories.

“La Fornarina” is traditionally identified with Margherita, though like a lot of things in art history, this has been questioned. The woman is pictured with an oriental-style hat and bare breasts. She is making the gesture to cover her left breast or to turn it with her hand, which is illuminated by a strong light coming from outside.

Her left arm has a narrow band carrying the signature of the artist, RAPHAEL URBINAS. It has been suggested that the right hand on the left breast reveals a cancerous breast tumor disguised in a classic pose of love. Another speculation is that she is touching her left breast to remind herself which side she last fed her child on, the child being Raphael’s.

X-Ray analyses have shown that in the background was originally a Leonardesque-style landscape in place of the myrtle bush, which was sacred to Venus, goddess of love and passion. The painting was probably painted just before Raphael’s death. Raphael on his deathbed sent his mistress away “with the means to live an honest life”. His body lies in the Pantheon beside his official fiancée Maria, daughter of his patron Bernardo Dovizi. Raphael had long delayed this marriage which never happened.

And what happened to beautiful “La Fornarina”? In 1897 a document was discovered indicating that Margherita, the widowed daughter of Francesco Luti of Siena, retired to the Convent of Santa Apollonia four months after Raphael’s death.