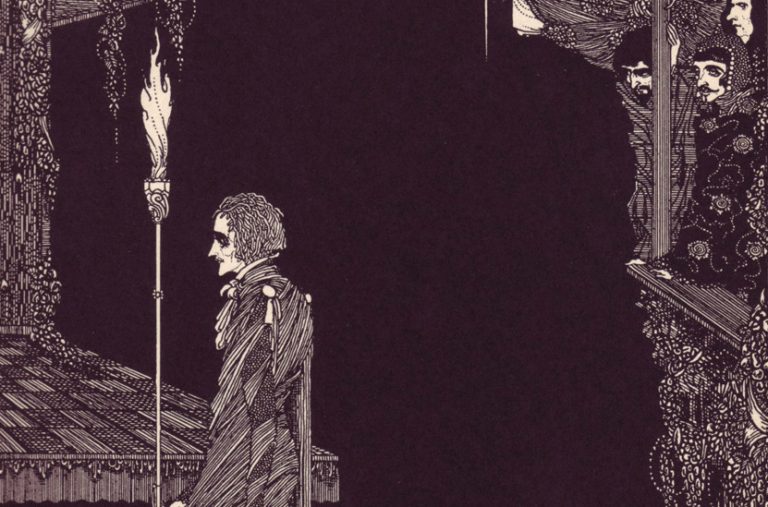 Harry Clarke was an Irish stained glass artist and book illustrator. He made notable works in both fields but somehow his stained glass works are more the subject of discussion. They are also easier to find. However, his illustration work deserves special attention. Especially his marvelous set of illustrations for Edgar Allan Poe’s Tales of Mystery and Imagination.

I had walled the monster up within the tomb!

E. A. Poe, The Black Cat, Tales of Mystery and Imagination.

Harry Clarke was born in 1886 in Dublin. His father was a church decorator and had his own decorating business Joshua Clarke & Sons. Therefore, Clarke had close encounters with art from an early age. He attended Belvedere College and the Metropolitan College of Art and Design in Dublin. Subsequently, Clarke worked in his father’s studio which he took over with his brother after their father’s death in 1921.

There was a sharp cry- and the dagger dropped gleaming upon the sable carpet, upon which, instantly afterwards, fell prostrate in death the Prince Prospero.

E. A. Poe, The Masque of the Red Death, Tales of Mystery and Imagination.

Harry Clarke is most recognizable for his big stained glass works like the windows of the Honan Chapel in University College Cork, the depiction of John Keats’ The Eve of St. Agnes, and the Geneva Window. However, the book illustrations are also worthy of attention and admiration.

It was the work of the rushing gust-but then without those doors there did stand the lofty and enshrouded figure of the Lady Madeline of Usher.

E. A. Poe, The Fall of the House of Usher, Tales of Mystery and Imagination.

After finishing his education, Harry Clarke moved to London to look for a job as a book illustrator. His first commissions were for Samuel Taylor Coleridge’s The Rime of the Ancient Mariner and Alexander Pope’s The Rape of the Lock, but they were never completed. Consequently, his first printed work was Fairy Tales by Hans Christian Andersen in 1916. Afterward, Clarke finished two editions of Edgar Allan Poe’s Tales of Mystery and Imagination, in 1919 and 1923.

Tales of Mystery and Imagination

During the golden age of gift-book illustration, the 1923 edition of Tales of Mystery and Imagination made Harry Clarke’s reputation as a book illustrator. Through his illustrations, he indeed produced the unique world of Poe’s horror poems.

They swarmed upon me in ever-accumulating heaps.

E. A. Poe, The Pit and the Pendulum, Tales of Mystery and Imagination.

He brilliantly captioned the fear and insanity the main characters were going through. Doubtless, you can clearly see the uncertainty the characters experience in the horror scenes. Besides, Harry Clarke created odd and haunting creatures. Creatures with geometrically stylized bodies and unnaturally long slim hands, and with otherworldly, non-human appearances. Therefore, his depictions just added to Poe’s stories.

I would call aloud upon her name.

E. A. Poe, Ligeia, Tales of Mystery and Imagination

Finally, Harry Clark’s imagination had no boundaries. His unique style is recognizable in his other works like the illustrations for The Years at the Spring (1920),  Charles Perrault’s Fairy Tales of Perrault (1922), Goethe’s Faust (1925), and the Selected Poems of Algernon by Charles Swinburne (1928).