Holy Cow! Why Did The Dutch Painters Love Cows? 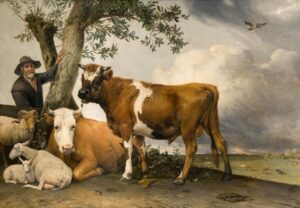 Every time I look at 17th-century Dutch landscape paintings, I ask myself the same question:

WHY DO THEY ALWAYS SHOW COWS?

You think it’s a shallow and useless question…? Let me show you there is more substance to it….

Dutch landscape painters’ interest in lifestock, and the prominence given to cattle reflected the Dutch pride in their milk industry. With time, cow had become a symbol of Holland and its prosperity and any picture portraying cows not only reflected the 17th-century social and economic conditions, but also expressed nation’s patriotic feelings.

Dutch lanscapists were inspired by ‘Italianate’ landscapes popularized by works of Claude Lorrain and Nicolas Poussin. Many of them travelled to Italy and after they’d come back, they tried to recreate the unique quality of Italian light. However, despite the Italian theme, Berchem still included cows in his paintings, which coupled with the bucolic calm of nature, conveyed in fact a message about the economic stability of Holland.

What a cute painting! It comments on the harmonious relationship between humans and animals. Moreover, it carries a moralizing message in which the cow and the sheep families stand for the patriarchical nuclear family of the Dutch.

No, you’re not mistaken: this is a painting of a cow looking at a cow on another painting. Look closely, Tansey references the painting by Paulus Potter we’ve just seen. What is this work about? Well, this time not so much about cows but about modern art. By showing human experts expecting a reaction from a cow – will she recognize herself? will she distinguish artifice from reality? will she admire Monet’s Grainstack (Snow Effect), 1891, (on the wall to the right)? – Tansey offers a critique of  representation in modern art used as a method to revitalize the tradition of painting. He refers to tradition by using grisaille, or grey monochrome, which was often applied in academic painting.

Autumn is a period of transition. The hot, sunny days of summer become grey and shorter. The trees, lightened of their fruits, unwind to the extent...

One of the phenomena that developed in the last 12 months is that of ‘pandemic puppy’. If you took one we hope you are happy together! But if you...

Dachshunds were first bred around the 15th century in Germany. Their primary purpose was to hunt small animals, particularly badgers, and they are...