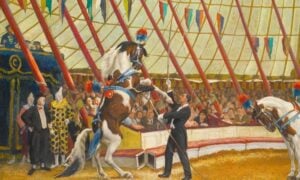 Ladies and gentlemen, boys and girls, children of all ages. The DailyArt Magazine proudly takes each of you for a lovely ride in the circus. And no, we’re not talking about ‘a’ circus. Today, you will meet the incredible circus of Dame Laura Knight. Join us for this fun experience and you’ll never see any circus the same way again. Ready?

But first, a few words about our star. Laura Knight was an excellent portraitist born in England on August 4, 1877. Most of her works are genre paintings about theaters, dance companies and, of course, circuses – for which she received a lot of recognition.

However, she had a difficult childhood. She was abandoned by her father and lost her mother to cancer when she was a teenager. Yet, Laura kept on studying art, thanks to a scholarship she obtained from a museum. And it is thanks to this scholarship that she met her future husband, Harold Knight. Like Georgina and Lucílio de Albuquerque, Harold and Laura admired each other’s works, then became friends and eventually fell in love and married. It seems that schools of art are good at matching people, aren’t they? By the way, did I mention that Laura was a dame? Dame is a female equivalent of a sir, a title which celebrates major achievements in the United Kingdom. Yes, Laura was a wonderful woman!

Around 1920, Laura met the famous Bertram Mills Circus in West London. She had already painted several theater scenes and famous ballet companies and evidently was enchanted by the circus atmosphere. In Circus Matinee (below), she presents the company getting ready. Here she documents the moment when the acrobat (in red) talks to the dancer and the clown. Notice the relaxed poses of the three colleagues who are talking. The painting serves to remind the audience that there is more to the circus artists. They are also human beings who strive to amuse others. And Laura captured it like nobody else. It’s such a beautiful work. Even the horses are shown in their magnificent beauty.

Nowadays it is not so common for circuses to have animals, but at the time when Laura lived with Circo Mills, this was common. As can be seen, their presence did not escape the trained eyes of the artist who included them in many of her works. She especially liked a horse called Hassan and he appears in many of her paintings. One example is Elsie on Hassan (below). The girl in the painting, Elsie Scott, was a circus equestrian.

Laura liked to portray moments in which the circus performers showed that they were just people like any other. In The Three Clowns she portrays artists Mills, Marba and Joe Bert, recurring characters from Laura’s circus. In A Musical Clown the artist shows the couple Bento – he is a clown and she is a dancer. What are these characters talking about? What would the everyday affairs behind the scenes of a circus be like? Laura sets us free to imagine.

The artist, however, did not just portray the behind-the-scenes of the enchanting circus world. She also depicted the breathtaking shows. In the beautiful The Trick Act (below), she shows a horse rider surrounded by vibrant colors and a full audience. Laura perfectly captures all the energy of the circus show, just as she captured its mundane everyday details.

Laura died in July 1970.  Of huge significance is the fact that she was the first woman to be elected at the Royal Academy in 1927. She was also the president of the Society of Women Artists in 1932. Laura achieved recognition and won awards, but most important of all, she captured the artistic spirit of her time and did it admirably well.

She also continually exhibited and documented on canvas many crucial events of her era, such as the Nuremberg Trials. The circus paintings are just one aspect of Dame Laura Knight’s work. Personally, I like to see artists portraying artists, but if you want to know more about the work of Dame Laura Knight, I suggest you visit the official website where the biography and works are available. Let yourself be enchanted by this woman – this wonderful woman.