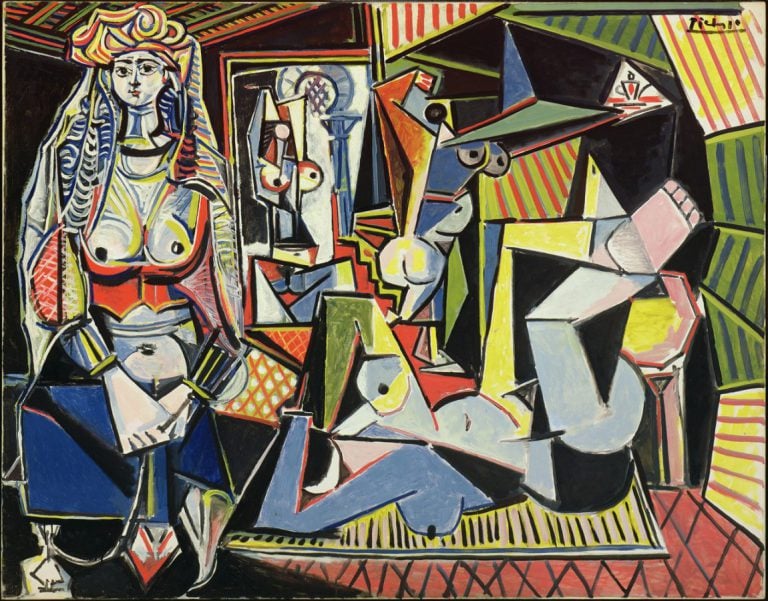 Stepping into the South of France with Picasso at BASTIAN

When the Algerian War of Independence began on 1st November 1954, Pablo Picasso felt an urge to somehow respond to the violence and suffering that was spreading. He reached out to his memory and the great Romantic master, Eugène Delacroix, to reconstruct his famous work Les Femmes d’Alger (Women of Algiers). In the winter months that followed, he produced 15 canvases, all variations on the theme.

Picasso studied Delacroix‘s Women of Algiers (1834 and 1849) at the Louvre. Françoise Gilot, a painter and partner of Picasso, wrote in 1964 that Picasso would go to the museum once a month to look at the painting. When Gilot asked him how he felt about Delacroix, he replied: “That bastard. He’s really good.” He produced many sketches in which he focused on women’s poses (seated vs lying), the servant in motion, the curtain and the water pipe. The variety of movements and shapes permitted Picasso to explore the theme in his personal Cubist style but also to include references to his contemporary, rival, and friend, Henri Matisse, who had died just five weeks before Picasso began the series. Matisse and Picasso truly respected one another’s work, as proven by Matisse’s statement that the only person with a right to criticize his work was Picasso.

“When Matisse died he left his odalisques to me as a legacy,” Picasso said, hence the series can also be considered a sort of elegy for the lost friend. The link between Picasso, Matisse, and Femmes d’Alger extends even further, as Matisse considered Delacroix as his predecessor in terms of dynamic use of color and the recurring orientalizing subject matters.

The versions are named with letters of the alphabet and the version above, H, is very similar to his first one, A, both in terms of the color palette and the composition. As you can see, Picasso took the liberty of moving the lying girl to the center and enlarging her. If you look at her pose, you can find a reference to Matisse’s controversial Blue Nude, which to many was too vague in terms of the race of the girl and hence was difficult to classify whether it was colonizing or not. In Chicago, it was even burned in effigy! Nevertheless, in 1907 it fascinated Picasso and George Braque to continue with their Cubist experiments.

As he progressed with the variations, Picasso made each of them different. Some of them are more abstract, others carry more figurative elements. Here we can see how dark colors dominate the picture and the women’s bodies almost fuse with the geometrical background. Do you see how dynamic the figure of the servant is? She’s even holding a teapot! Initially, all 15 works were bought by Victor and Sally Ganz, Picasso collectors, in June 1956. They then sold ten paintings and just kept versions C, H, K, M, and O, which they hung in their apartment.

The final work in the entire cycle is a complete spectacle of color and form. We can see Cubist fractured forms, flat planes, and a distorted sense of depth. The bright and strong flat color patches are in turn a clear reference to Matisse’s colorful cut-outs. In 1997 it was sold at Christie’s for $31,902,500…

Recently I showed you views of typical wintery Russia by Korovin, which you can see here. Today we’ll see instead something out-of-ordinary.

At the beginning of the 20th century, Pablo Picasso created the famous Les Demoiselles d’Avignon. Georges Braque was immediately inspired and...