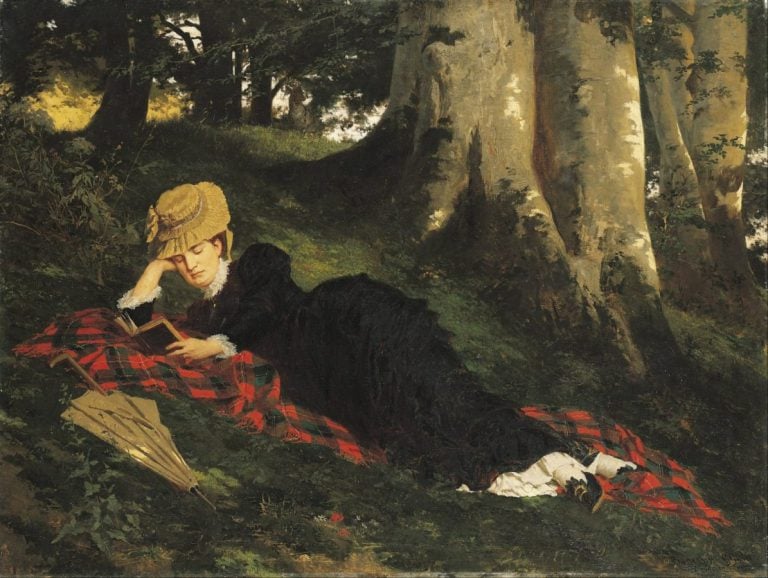 Books have been an indispensable part of our daily lives since ancient times. From scrolls to kindles, the way we read may have evolved, however the significance of books remains constant. Since 1995, the 23rd of April has been celebrated as World Book Day in order to promote reading and publishing. The day was chosen by UNESCO to mark the death anniversaries of prominent authors such as Miguel de Cervantes, William Shakespeare, and William Wordsworth. Let’s look at six paintings with different styles, depicting reading on 2021’s World Book Day.

Until recently, this painting was attributed to the German Renaissance painter Albrecht Dürer. In 1906 Cavaliere Di Giovanni donated it to Museo Nazionale. He had purchased it from a wealthy family in Palermo thinking it was one of Dürer’s works. In this painting, Antonello da Messina portrays Virgin Mary in oil technique. It was a unique style to him as tempera was the popular painting medium used by his contemporary Italian artists. The painting shows a serene Mary interrupted at her reading by the angel of Annunciation. Meanwhile this simple depiction of Mary allows the viewer to focus on her emotion.

In 1769, French Rococo painter Jean-Honoré Fragonard started painting a series of canvases now known as The Fantasy Figures. However, A Young Girl Reading is the only piece in the series in which the subject is not directly facing the viewer. It shows an unknown woman sitting comfortably while focusing her gaze on a small book she holds with her right hand. Fragonard instantly makes the viewer feel a sense of mystery, wondering what the female figure might be reading in such an immersed manner. Furthermore, an X-Ray taken of the painting in the late 1990s shows under the final painting there is a drawing of the young woman turned towards viewer. It remains unknown why Fragonard changed his mind and painted the version we see today.

Charles Edward Perugini was an Italian-born Romantic painter who lived and worked in Victorian England after receiving formal training in Naples and Paris. In 1863, he worked as a studio assistant to Sir Frederic Leighton, widely known for painting Flaming June. Under Leighton’s influence, Perugini began depicting classical scenes. Later on his interest shifted to more profitable subjects such as portraiture and family paintings. In Girl Reading, a woman is sitting on a marble bench. She rests her chin on her right hand while brushing the sprig of blossom she is loosely holding. Her attention is captured by the contents of her book. Perugini took some inspiration from his wife when he painted this medieval-like figure wearing a white silken dress.

“Reading books is like looking at paintings: without doubting, without hesitation, with self-assurance, one must find beautiful that which is beautiful.”

Vincent van Gogh in a letter to his brother Theo, 5 August 1881.

Vincent van Gogh was an admirer of contemporary writers from his time such as Emile Zola and Guy de Maupassant. He believed these authors captured the world they lived in so accurately and read their books repeatedly. He is often praised not only for his extraordinary paintings but also for his fascinating letters giving art enthusiasts an insight into his world. In several of his letters he wrote to his brother that he owed his sanity to reading and re-reading books. The painting shows a stack of his favorite books as an homage to modern French literature.

5. Woman with a Book by Fernand Léger

The end of World War I forced painters to rethink their relationships with society. There was pressure for modernity and artists to influence society through their representations of aesthetics. Fernand Léger focused on producing solid images with bold colors and simple geometric forms such as in his Woman with a Book. The painting shows a woman holding a bunch of flowers and an open book. With this painting, Léger promises the way forward is beauty and knowledge during the years France was recovering from the devastation of the war. The robotic design of the female figure in the painting may be hinting at Léger’s passion for the Industrial Revolution.

6. The Library by Jacob Lawrence

Jacob Lawrence was the most widely acclaimed African-American artist of the 20th century. He created a group of 30 paintings named the Harlem Series which includes several pictures of libraries. Libraries had a special place in his life; as a student he regularly borrowed books from them and read about the African-American heroes of his time, who later became subjects in his paintings. In The Library, a group of people appears to be absorbed in their books, reading about their heritage.