An Italian who became the absolute genius of universal painting through a technique of rare precision, a minute realism, the best of Flemish expression, a beauty without comparison of figuration and chromaticism, an exasperated intensity of expressions and no heir. Antonello da Messina: author of the powerfully psychological modern portrait.

Only a few of Antonello da Messina's (1430 - 1479) works remain, the others lost to tragic natural events such as floods and earthquakes or simple negligence and ignorance. Those that remain are dispersed in various Italian museums and other institutions across the Atlantic; many have on several occasions undergone extensive restorations that have forever altered the original version, whilst others have remained miraculously intact. This exhibition at the Palazzo Reale in Milan is one of the most important cultural events within the national and international art scene in 2019. A unique and special opportunity to enter the world of a sublime and unmistakable artist, considered the greatest portrait painter of the 15th century, author of an indelible trace in the history of Italian painting. We can admire works from the National Gallery in London (Saint Jerome in his Study, 1474-1475), from Romania (Crucifixion, 1460), the Philadelphia Museum of Art (Portrait of a Young Gentleman, 1474), the National Gallery in Washington (Madonna Benson, 1475) and from the Berlin State Museum (Portrait of a Young Man, 1478). [caption id="attachment_19839" align="aligncenter" width="716"] 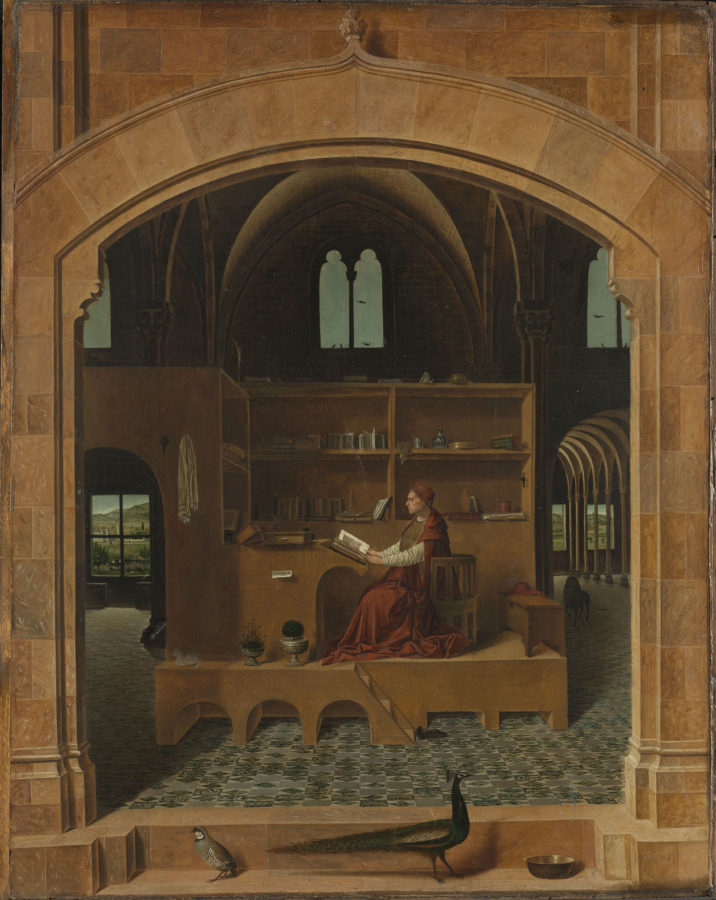 Giovan Battista Cavalcaselle, Saint Jerome in his Study, Biblioteca Nazionale Marciana, Venezia[/caption] The marvelous sketches and notes of the reconstructions and rediscoveries of Giovan Battista Cavalcaselle, the first to attempt to retrace the artistic production of Antonello da Messina, unveils step-by-step the creation process of the artist to create figures that seem almost alive. Large-scale reproductions displayed on the walls of the museum allow us to compare and understand his exceptional techniques. For example in the detail of a brush stroke, how only by rotating the brush da Messina creates a pupil full of life. Or the perfect balance in the use of colors, how the mix of white, lapis lazuli, black and ochre brings to life a realistic smooth skin. [caption id="attachment_19840" align="aligncenter" width="1382"] 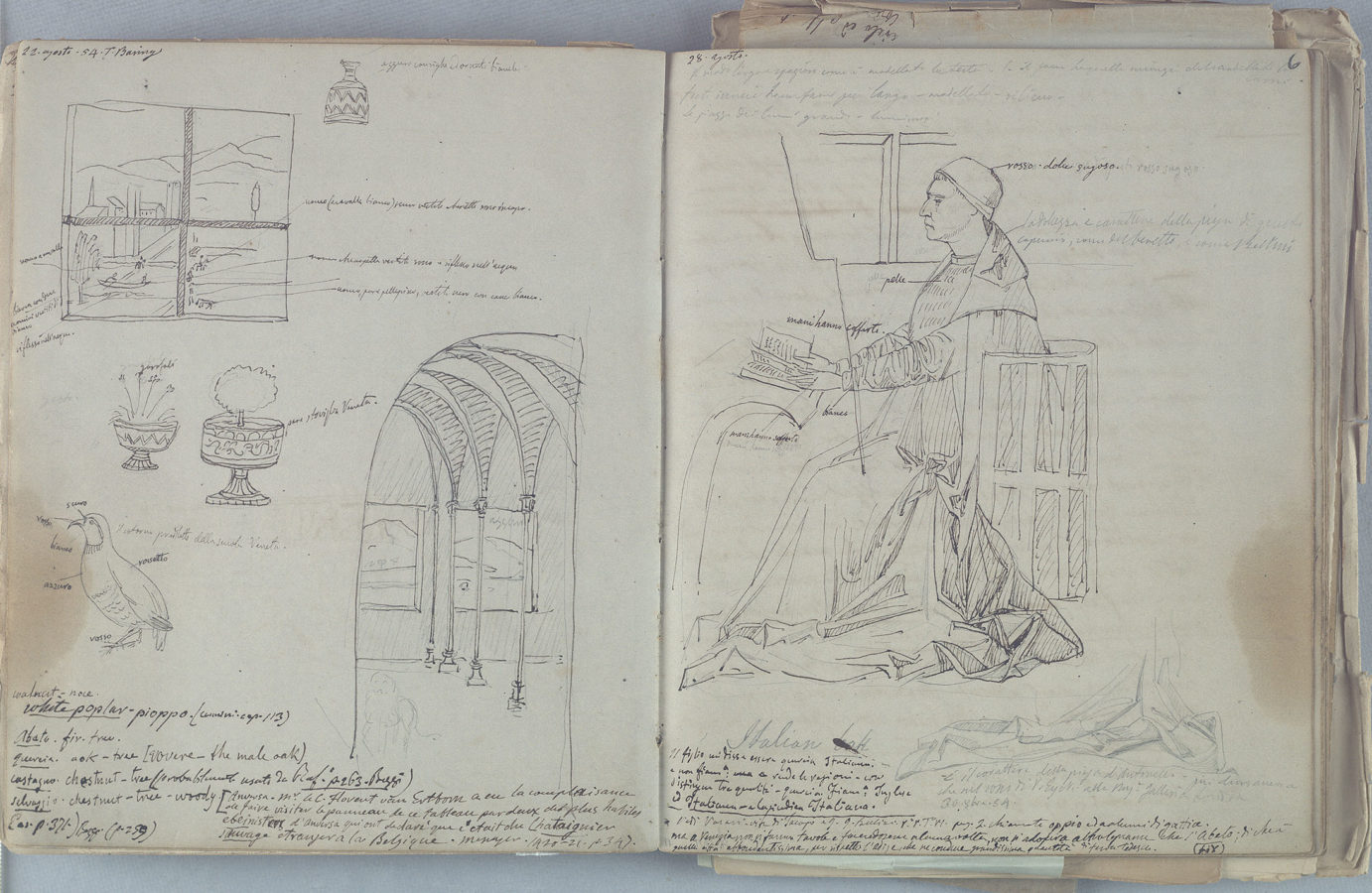 Giovan Battista Cavalcaselle, Saint Jerome in his Study, Biblioteca Nazionale Marciana, Venezia[/caption] Antonello da Messina had an impressive capacity for observation that allowed him to capture and impress on the canvas the human essence, but, like all great masters, he could also adapt his art to new movements and materials. Inspired by Bellini’s vivid pigments, Antonello da Messina made a color renewal that gave life to a perfect icon: The Virgin Annunciate (1475 - 1476), perhaps his most famous work, an authentic icon and the perfect synthesis of his art. [caption id="attachment_19841" align="aligncenter" width="674"]

Antonello da Messina, 1475-1476, The Virgin Annunciate, Galleria Regionale della Sicilia di Palazzo Abatellis, Palermo. Giulio Archinà[/caption] Madonna and Child (1480) closes the exhibition with a romantic touch, because this is the work of his son, Jacobello di Antonello, who was part of his father's workshop and took charge of completing what death had prevented Antonello from finishing. This painting, made one year after the death of Jacobello's father, is, according to the unusual signature, by the son of a "non-human [i.e. divine] painter". And that’s how for centuries Antonello da Messina would be seen. [caption id="attachment_19842" align="aligncenter" width="623"] 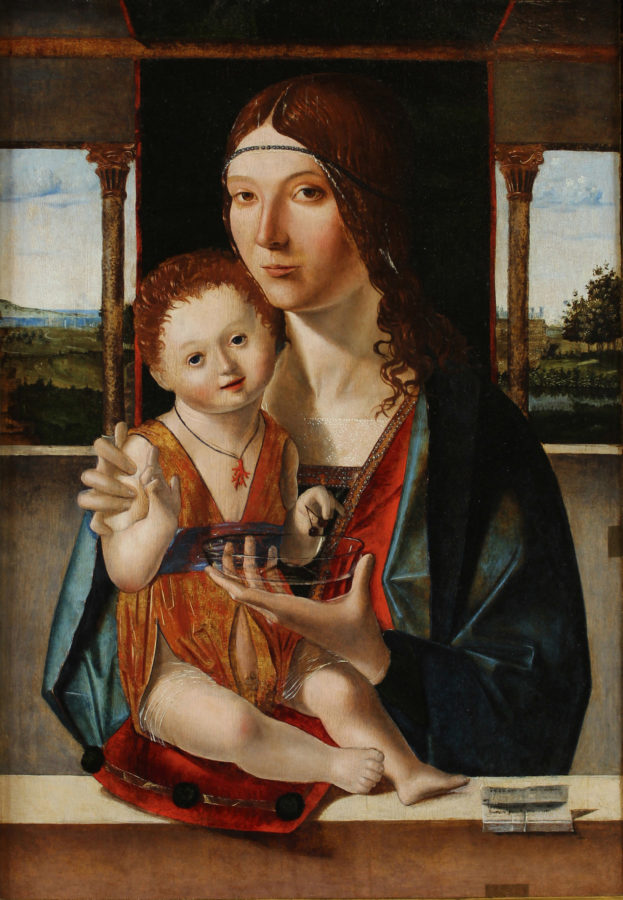 Antonello da Messina - Jacobello di Antonello da Messina, 1480, Madonna and Child, Accademia Carrara, Bergamo. Fondazione Accademia Carrara[/caption] This is a fascinating and truly unique exhibition dedicated to the relationship between the artist with his hometown and to the few reports and works left from his life. The exhibition not only showcases the work of Antonello da Messina, but also provides a window into a period of history, the dynamics of the world and how commerce intertwined with the routes of art at that time. It is an occasion to appreciate the psychological introspection of the portraits painted by the 15th century master of portraiture and the technical mastery that he established as his personal brand, by using and reworking mixtures and endless drafts of colors taken from Flemish contemporaries, mixing this with Venetian influences to create, in a Mediterranean way, an unmistakable beauty that established the grandeur of the universal and timeless spirit of the Renaissance. [caption id="attachment_19843" align="aligncenter" width="705"] 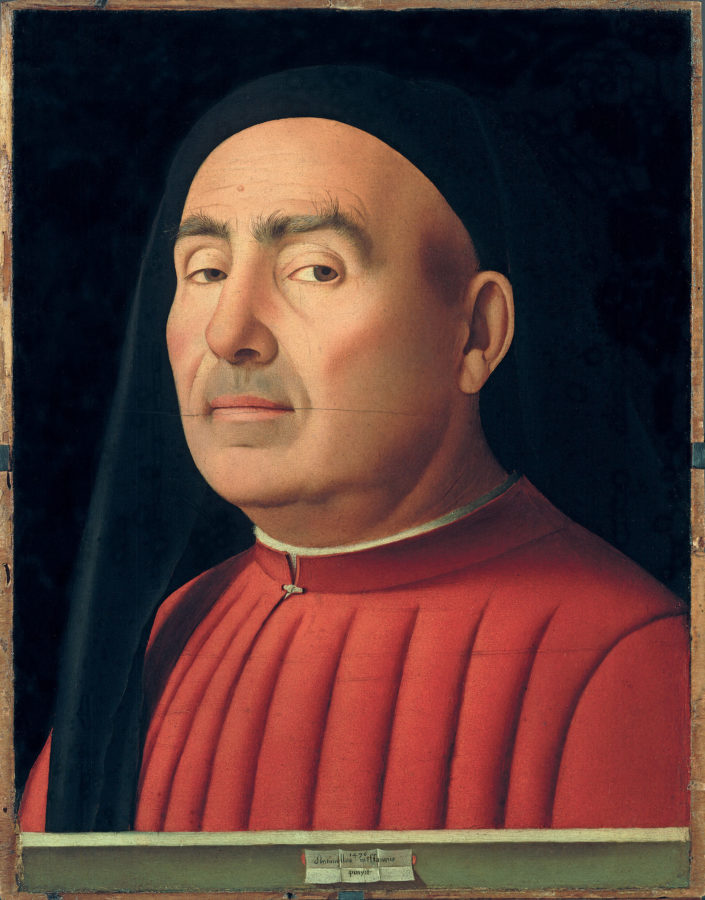 Visit the exhibition at the Palazzo Reale in Milan until June 2, 2019.