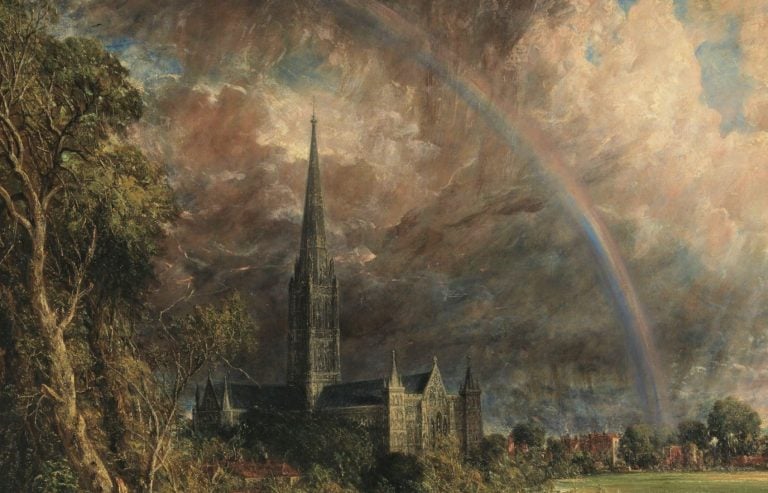 Rainbows for the NHS and Damien Hirst

Let us look at the significance of rainbows in art history across different cultures. Even though we now know the scientific reason behind rainbows, they continue to fascinate us. For artists, rainbows have been subjects of deep awe and symbolism. Artists like John Constable studied the science of rainbows and included it later in his art. Others like Frederic Edwin Church and Albert Bierstadt have painted double rainbows and two double rainbows, reminding us that they are rare but they exist and hopefully, someday we will see them as well.

Rainbows are formed when light passes through raindrops. They are optical illusions created by the refraction and reflection of light. It is because of their colorful and unique display that rainbows have generated countless legends and myths across cultures. Among the most popular is the Irish folklore that leprechauns store their pot of gold at the end of a rainbow. As a natural phenomenon, rainbows can only be seen if you are in the right place at the right time. If you have ever seen one, consider yourself lucky.

What Is a Rainbow?

Visible light is made up of various wavelengths and each wavelength appears as a different color: red, orange, yellow, green, blue, indigo and violet. Contrary to how they appear, rainbows are not located at a specific place, the location is relative to the person. This means that you cannot chase rainbows and there is no pot of gold at the end. Nevertheless, rainbows have fascinated artists both as a natural wonder and as a symbol of hope in the transience of life. Let’s see some rainbows in art history!

1. Rainbow over a Cathedral by John Constable

John Constable’s Salisbury Cathedral from the Meadows was first exhibited in 1831. At the time he was grieving the loss of Maria Bicknell, his beloved wife, and mother of his seven children. The couple had spent part of their honeymoon in Salisbury. The town was also the home of Constable’s best friend, the Archdeacon John Fisher. The painting’s turbulent sky has been interpreted as a reflection of Constable’s tragic loss and the perfect rainbow as a symbol of hope and happy memories.

When the painting was first exhibited, it did not include a rainbow. Constable added it later to commemorate his friendship with Fisher, who died in 1832. Constable was highly interested in meteorology and learned the science behind rainbows from his mathematician friends. Rainbows can be dated very precisely based on their position in relation to the sun. This one would have graced the sky on 25 August 1832, the date of Fisher’s death. In the painting, the end of the rainbow touches Fisher’s house.

John Constable (1776–1837) was one of those artists who was continuously plagued by self-doubt. He worked on the painting even after it was exhibited to increase its power and effect. Constable also wrote about the geometry of rainbows and analyzed their shapes and colors in diagrams. He believed that to truly “see’” something we need to understand it, and to see a rainbow properly you need to understand how it is formed

Born in Hartford, Connecticut, Frederic Edwin Church (1826-1900) was interested in pursuing art from a young age. He was the first pupil accepted by Thomas Cole, America’s leading landscape painter, a distinction that gave him an advantage over other aspiring painters of his generation. Church was part of the Hudson River School, an informal group of like-minded painters whose style involved carefully detailed paintings with romantic, almost glowing lighting, sometimes called Luminism.

Church traveled widely in search of his subjects, first throughout the northern United States and then to South America. Inspired by the writings of the great German naturalist Alexander von Humboldt, he spent five months in Colombia and Ecuador. Humboldt put forth a vision of the interconnectedness of science, the natural world, and spiritual concerns.

Like Constable, Church was also dealing with loss and grief when he painted Rainy Season in the Tropics in 1866. His son and daughter both died of diphtheria in March 1865. A few months later, as the Civil War (1861-1865) came to an end, Church and his wife, Isabel, traveled to Jamaica. Church sketched and Isabel made a collection of pressed Jamaican ferns of which there were many spectacular varieties.

Double rainbows, as portrayed in the painting occur when sunlight left over from the initial reflection comes back through the raindrops a second time. They are a rare phenomenon in nature, but they do exist. The double rainbow may also be interpreted as an expression of the artist’s personal loss, where each one represents his son and daughter.

Albert Bierstadt (1830-1902) was a German-American painter best known for his large landscapes of the American West. Like Church, he was also part of the Hudson River School. He traveled widely across the North American landscape, took countless photographs, and made sketches of the majestic mountain ranges and dramatic rock formations.

Bierstadt’s paintings are Luminist in style, similar to the transcendentalist writings of American poet and writers, Ralph Waldo Emerson and Henry David Thoreau. They advocated that one must immerse oneself in nature in order to know oneself and the divine.

The paintings are marked by a certain depiction of light as a uniform glow over the entire scene. Luminist paintings reveal no brushstrokes, thus maintaining a silent, almost impersonal, surface. While partly influenced by Romanticism, Luminist paintings do not depict nature as grand, imposing, awe-inspiring, or sublime. Instead, Luminist paintings evoke a quiet spirituality based on closely observed natural phenomena, especially the quality of light. Luminist light is particularly distinct. It is often cool and hard, almost palpable.

4. Rainbow as a Wonder of Creation

Abu Yahya Zakariya’ ibn Muhammad al-Qazwini or Zakarya Qazvini ‎(1203-1283) was a Persian physician, astronomer, geographer, and writer. The Illustration of the Rainbow is from The Wonders of Creation (1280), an important work of cosmography written in Arabic.

Qazwini’s cosmography consists of two parts: the first part is celestial, dealing with the spheres of heaven and its inhabitants, the angels, and chronology. The second part discusses the terrestrial: the four elements, the seven climes, seas, and rivers, a sort of bestiary on the animal kingdom (including mankind and the jinns), plants, and minerals. He discusses man, his soul, character, weaknesses, and illnesses.

Qazwini’s cosmography was one of the most read works in the Islamic world. The Universe is depicted as the manifestation of the absolute Truth or God. Qazwini stated that it is important that Man should make an effort to investigate the wondrous and wisely conceived creations of God. One should reflect in astonishment, and understand as much as it is possible. In this way, Man will gain the delights in both this world and the hereafter.

The rainbow illustrated in the manuscript is more symbolic than scientifically accurate. It does not have the seven identified colors of the rainbow and the most prominent color is red. Each band of the rainbow is outlined with gold. Here the rainbow represents one of the many ways in which God works: beauty, unknown, strange, and confusing.

A Swiss-born artist, Paul Klee (1879-1940) was highly influenced by art movements like Expressionism, Cubism, and Surrealism. As a child, Klee was mainly oriented as a musician, having played the violin since he was eight. Later, in his adolescent years, he found that art allowed him the freedom to explore his style and express his radical ideas.

Klee’s With the Rainbow depicts straight lines and blocks of solid color contrasted against a full circle of blue and the half-circle of a rainbow. Although Klee is now considered a master of color theory, he spent a long time exploring his sense of color.

The colored rectangles became building blocks of his paintings which are often compared to musical notes. The colored blocks create a sense of harmony like a musical composition. As a color theorist, a rainbow would have fascinated Klee in the way it displays seven colors at the same time.

Artists across cultures and times have explored rainbows in art history. What begins as an artistic reflection of a natural phenomenon, rainbows often carry deep personal meanings for the artists. Next time, when you see a rainbow, remember that you are in the right place at the right time.