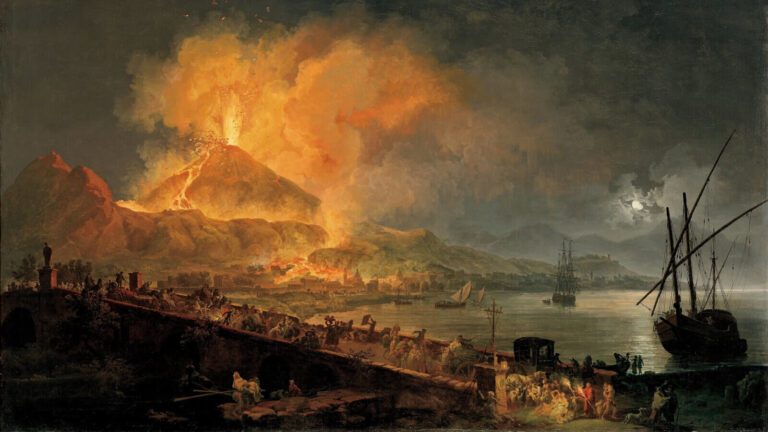 The ground shakes and rumbles as the nearby mountain awakens. Smoke emerges from its peaks and the volcano stirs from its slumber. The land trembles more and a fiery blast shoots into the air as lava spews from the magma chamber. Liquid earth flows down the mountainside as rivers of molten rock. Death and destruction await all who live below this catastrophic eruption. The year is 1771 and Mount Vesuvius is erupting yet again and bringing panic to the people of Naples, Italy. Pierre-Jacques Volaire, a French painter and recent resident of the city, captures the moment with his Eruption of Mount Vesuvius. This is not your typical 18th century French painting. Gone are the silks, lace, and ribbons adorning ladies and goddesses. Love and desire are replaced by death and destruction. The games and intrigues of love seem flippant and ridiculous against the power and fury of nature. The only love here is the love of an almighty as you pray to survive. The Rococo style is forgotten as the Neoclassical world collides with the Romantic spirit. Volaire’s Eruption of Mount Vesuvius explores such themes and more. This is a nocturnal nightmare. This is a classical romance.

Pierre-Jacques Volaire was born in Toulon, France but spent his most artistic years in and around Naples. He lived a fairly uneventful life and painted pretty scenes of the serene Italian countryside for English and German tourists. English and German gentlemen of the 18th century went on a Grand Tour of Europe, which always included Italy, as part of their cultural and intellectual education. To be considered a refined and worldly gentleman, one must have done Italy at some point in one’s life. Therefore, Pierre-Jacques Volaire had a ready audience to buy his pretty little paintings of idyllic life, pleasant moments, and picturesque scenes. This was all to change one evening in 1771 when Mount Vesuvius erupted.

The 1771 eruption was definitely not the first time that Mount Vesuvius has erupted. Nor was it the last time. Mount Vesuvius is one of Europe’s most active volcanoes and has been since the famous 79 CE eruption that destroyed the ancient Roman city of Pompeii. Mount Vesuvius was especially active during the 18th century when it erupted almost every decade. For new Neapolitan resident Pierre-Jacques Volaire, the sight of this monstrous mountain erupting would have been both shocking and scintillating. The great columns of fire and smoke sprouting above the sprawling cities below. It must have been unforgettable for Volaire because after the 1771 eruption Volaire quit his pretty little paintings and painted image after image of Mount Vesuvius erupting. He created thirty paintings in total including this version from 1777. All of them capture the intensity of that memorable evening.

Was Pierre-Jacques Volaire suffering from post-traumatic stress disorder (PTSD) and trying to subconsciously seek therapy from the event by painting similar images over and over? Did Volaire develop obsessive compulsive disorder (OCD)? Painting thirty images of the same eruption does seem obsessive. However, despite how convincing these psychological interpretations can be, they are not accurate. Volaire painted the eruption of Mount Vesuvius over and over again because it was the perfect subject to explore so many artistic themes and ideas such as Neoclassicism and Romanticism.

Neoclassicism was born out of the admiration of ancient Rome and Greece. Neoclassicism meant referring to these classical times when austerity and simplicity were praised as virtues. The straight lines of architecture and urban planning were being literally excavated in the ruins of Pompeii and Herculaneum during the early 18th century. A Pompeii-mania developed and the Rococo style found in architecture and paintings fell out of fashion. Colourful curvy lines were replaced with white straight lines in architecture. Subjects of love and desire were replaced by subjects of sacrifice and honour in paintings. The contemporary world was sneered while the ancient world was revered. In essence, the ideas of frivolity were replaced by the ideas of virtue. Pierre-Jacques Volaire’s Eruption of Mount Vesuvius eludes to the classical world by referencing Pompeii’s own destruction in 79 CE. The town in the painting is the new Pompeii as it is consumed by the same volcano almost 1,700 years later.

Romanticism was born out of the admiration for nature and the powers it can either blight or bless the world. Romanticism explored the idea of human frailty against mother nature. How do people face natural disasters like storms, eruptions, and disease? Romantic painters like J. M. W. Turner, Caspar David Friedrich, and Eugène Delacroix explored such questions in such adversities. People scream, run, and collapse in their paintings as they face death and destruction. If people are not depicted in a painting, then their absence only adds to the destitute feelings of the scene. Pierre-Jacques Volaire’s Eruption of Mount Vesuvius definitely has many Romantic elements to intensify the scene. There are rocks flying, lava flowing, and buildings burning. There are men fleeing, women praying, and children crying. Volaire’s Eruption of Mount Vesuvius combines the Neoclassical world with the Romantic spirit.

With the Neoclassical world being so en vogue why does Pierre-Jacques Volaire not depict the original 79 CE eruption that destroyed Pompeii? Why does Volaire not depict a more classical town in the heat of destruction with temples and porticos? Why does Volaire not drape all the people in togas and more ancient Roman-themed attire? Volaire uses a contemporary world in his Eruption of Mount Vesuvius because it makes a more dramatic impact on his audience. People living in 1777 would have easily identified with the people of the painting due to their contemporary clothing, carriages, and ships. They could easily imagine themselves as one of the many fleeing, praying, or crying people painted into the scene. Besides, the 1771 eruption would not be so easily forgotten in the six years between the subject’s eruption and the painting’s completion. The disaster would still be fresh in people’s minds.

What further enhances Pierre-Jacques Volaire’s Eruption of Mount Vesuvius to rise above mediocrity is its excellent composition. If the painting was cut in half it would form two excellent independent scenes. The left half would be dominated by fire, heat, and destruction. The right half would be dominated by water, cold, and serenity. There is an elemental separation between the two sides of the whole painting, and this separation heightens the drama. The cool placid water acts as a foil to the hot violent fire. In order to see the eruption’s intensity, it must be contrasted with the water’s tranquility. Opposite elements in a painting allow the painting to have a sense of scale for its intensity and vibrancy. The brightest reds appear brighter because of the darkest blues contrasting against them. Volaire’s Eruption of Mount Vesuvius uses the dual personality of nature to great effect. He uses destruction by fire, and prosperity by water.

Pierre-Jacques Volaire then further enhances his composition by using two different light sources to illuminate the horrific scene. He depicts the fiery glow of the volcano against the silvery glow of the moon. The earthly illumination contrasts against the celestial illumination. Elemental contrast is at play again. The moon’s light falls gently upon the water below. The volcano’s light falls violently upon the earth below. The volcano blights the land. The moon blesses the sea. The light sources are paired with their elements, and the elements of their halves of the painting. Constant harmony and contrast make Volaire’s Eruption of Mount Vesuvius a visually complex and exciting painting to experience.

Further adding to the complex experience are the religious allusions Pierre-Jacques Volaire included in the composition. Saint Januarius is the patron saint of Naples and protector against volcanic destruction. He makes three appearances in the foreground of the painting.  First he is a statue on the far left side of the bridge. He faces the volcano with his back to the viewer. Then he is an icon in the middle of the bridge. He is held aloft towards the volcano by a fleeing man. Lastly he is a print on the far right side of the bridge. He is a focus of prayer by the women on the ground. Three appearances of Saint Januarius mark this occasion. Three is a powerful number in the Christian faith. The number three represents the Holy Trinity, the Holy Family, the Three Magi, etc. Therefore, Volaire could be evoking a Biblical destruction similar to Sodom and Gomorrah. Perhaps Volaire did not enjoy living in Naples with its notorious noise, vice, and crime? Perhaps Volaire viewed Naples as the modern Sodom and Gomorrah and Mount Vesuvius as the modern Mount Sodom? Volaire’s feelings towards Naples is undocumented, therefore there is no definitive answer, but the religious overtures and numerical symbolism are there to present the argument.

Pierre-Jacques Volaire’s Eruption of Mount Vesuvius is a complex painting. It has themes of Neoclassicism, Romanticism, colour theory, elemental symbolism, and religious allusions. Volaire masterfully blends these many ideas into a seamless and unified vision of epic proportions. Never has the eruption of a volcano been so thoughtfully depicted. Never has it been so dramatically told. What is shocking to know is that nine years after creating this masterpiece, Volaire attempted to sell another version of this painting to King Louis XVI of France in 1786, and the king declined to purchase the painting on the grounds it was too sensational and not dignified enough for the royal art collection. The King needed respectable art of antiquity or mythology, not a contemporary image of a city under destruction. Perhaps the scene of terror, destruction, and instability was too uncomfortable for King Louis XVI. He was already having troubles with his people in 1786. King Louis XVI probably wanted something happier and more positive to adorn his walls during the troubled times of 1786. Whatever the reasoning may be for the King’s rejection, Pierre-Jacques Volaire’s Eruption of Mount Vesuvius is still a tour de force of 18th century French painting. Volaire blended so many timeless ideas, allusions, and symbols into his painting that in essence the painting is timeless. Viewers hundreds of years after its creation still admire it and will continue to admire it for centuries to come. Nightmares are timeless. Pierre-Jacques Volaire’s Eruption of Mount Vesuvius is a nocturnal nightmare. It is a classical romance.