Masterpiece Story: The Roses of Heliogabalus by Sir Lawrence Alma-Tadema 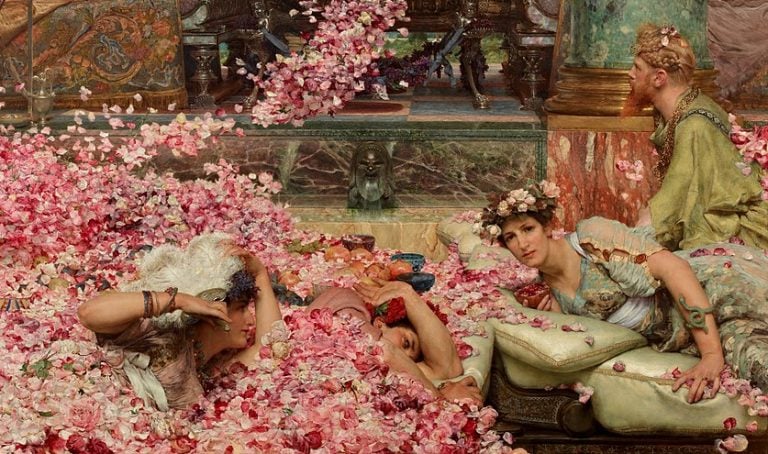 Psychological Truth on the Verge of Modernity: Symbolism in Victorian Art

Lust, Gluttony, and Sloth. Three of the Seven Deadly Sins are depicted in Sir Lawrence Alma-Tadema’s The Roses of Heliogabalus. Many other sins are depicted alongside these cardinal vices making this an extremely wicked painting.

While the late Victorian world was morally prudish and clad in dark velvets, late Victorian paintings were often morally bankrupt and clad in light silks. Academic paintings were all the rage, and they frequently used juicy historical anecdotes for the basis of their subjects. The Roses of Heliogabalus is no exception, as it depicts the infamous party scene hosted by Emperor Heliogabalus. The Roman emperor lies nonchalantly, drinks his wine, and observes as his guests below are smothered to death by rose petals. This is the ultimate party prank. This is the ultimate Roman death.

Sir Lawrence Alma-Tadema painted The Roses of Heliogabalus in 1888 when the British Empire was at its peak of power and influence. The Victorians were the undisputed rulers of one-fourth of the world’s land, and the phrase, “The sun never sets on the British Empire,” was penned to describe such a global domain that practically had territories in every time zone. The British were proud of their international power, uniting vast regions under the British flag.

Because of their vast dominion and unrivaled prosperity, the Victorians viewed themselves as the inheritors of the former Roman Empire. They believed they brought civilization to the uncivilized, manners to the unmannered, and morality to the immoral. Therefore, with a joyful backward glance, the Victorians reflected on Roman Imperial history with its peaks and pitfalls. Emperor Heliogabalus was definitely a pitfall worthy of note.

Heliogabalus was a Roman Emperor who ruled from 218 to 222 CE. In his short four-year reign he scarred Roman society and the annals of world history with his extremely debauched lifestyle. Frequent scandals surrounded Heliogabalus due to his decadent lifestyle and his transgressions against sexual and religious norms. He was an extremely unpopular emperor, and he eventually alienated everyone supporting his regime. His lifestyle must have been that ridiculously unacceptable because, after only four years of ruling, Emperor Heliogabalus was assassinated by his family, including his own grandmother!

After several hours of drinking heavy wine and swapping sexual partners, his guests were hopelessly intoxicated and tired. They lounged listlessly around the room. While they were so delightfully glowing from the heavy drinking and amusing entertainment, the ceiling above them opened and flutterings of flower petals began to fall. At first, the gentle wafting of petals added to the dream-like prettiness of the party. It perfumed the atmosphere with a slight floral scent.

It heightened the senses and added pleasure to the moment. More petals fell, and more, and more. The petals became a cascade of flowers. More flowers fell, and more descended upon the sleepy guests. A waterfall of petals erupted upon the helpless guests. They were showered, covered, and blanketed. Puddles formed into lakes that formed into oceans of petals. Hills had become petal mountains, and the guests were smothered under the endlessly growing sea of flowers. They breathed, and choked, and gasped for air. Petals entered their lungs, and they died covered in floral glory.

The quickening smell of death was masked by the smell of flowers.  Floral perfume wafted from the human-infused mountains of flowers. Emperor Heliogabalus was amused by the floral carnage and continued to drink his wine. Death was tonight’s real entertainment.

According to the original source, Historia Augusta, Emperor Heliogabalus used violets and other flowers to suffocate his dinner guests. However, Sir Lawrence Alma-Tadema uses roses as his method of death. During the late Victorian era, when Alma-Tadema painted The Roses of Heliogabalus, roses represented lust and desire in the Victorian language of flowers known as floriography. Roses were a more appropriate flower for Alma-Tadema to paint because violets represented faithfulness and modesty in Victorian floriography. Emperor Heliogabalus was many things, but he was certainly not faithful and modest. Therefore Alma-Tadema smothers the guests of Heliogabalus in roses and not violets, and adds a contemporary meaning his audience would have recognized.

When Sir Lawrence Alma-Tadema displayed The Roses of Heliogabalus in the Royal Academy Summer Exhibition of 1888, it was warmly received by the public. The public appreciated classical-inspired scenes especially if a moral story could be interpreted. Remember, this is the Victorian era, and unpunished vice would not be tolerated! The public easily interpreted Alma-Tadema’s symbolism and message: as the guests’ lust was smothered by the lustful rose, so does lust smother the virtuous soul. A contemporary message was conveyed using an ancient anecdote.

A contemporary message could command a contemporary price. When Sir John Aird, 1st Baronet, commissioned Sir Lawrence Alma-Tadema to paint The Roses of Heliogabalus, he paid Alma-Tadema 4,000 GBP. The price of 4,000 GBP in 1888 would approximately be 150,000 USD in 2020. Alma-Tadema was an appreciated artist in his time, and the price reflects the four months it took Alma-Tadema to create this great work.

What is sad is that shortly after Alma-Tadema’s death in 1912, his works and Academic style quickly fell out of favor with the public. The social changes brought by WWI, the 1920s, and the Great Depression culminated in his works being quickly forgotten and ignored. It was not until the 1960s that his works and the Academic Style began to be reevaluated for their stylistic majesty and clarity. The Academic Style is still being reevaluated today, and while it is not as popular as other styles of the same timeframe like Pre-Raphaelites, Impressionism, and Arts & Crafts, the Academic Style has its own masterpieces like Sir Lawrence Alma-Tadema’s The Roses of Heliogabalus.

Sir Lawrence Alma-Tadema fuses Victorian morality and symbolism with Roman Imperial history in The Roses of Heliogabalus. It brings to life a moment from one of Rome’s most hated and reviled emperors. It brings ancient history to a contemporary audience. It makes it both entertaining and educational. Who knew that a Roman Emperor literally smothered his dinner guests with flowers? We have Sir Lawrence Alma-Tadema to thank for capturing that humorous anecdote to enliven our next dinner party. The Roses of Heliogabalus is a history lesson on canvas. It is the ultimate party prank. It is the ultimate Roman death.