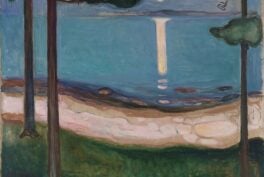 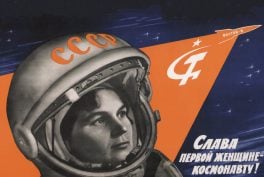 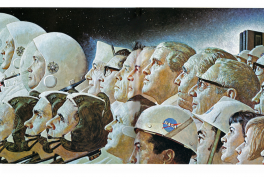 While our old pal, Moon, was always shining above us; it wasn’t always obvious how does it really look like. For a long time, this astronomical body was considered to be a smooth, almost perfect sphere. Our way of looking at the Moon was revolutionized by Galileo – and, even though we remember him as an astronomer, it was his studies in art that helped spark the discovery.

Born in 1564, Galileo Galilei was an Italian astronomer, attributed with many scientific discoveries such as inertia, Saturn’s rings, the Sunspots, and Jupiter’s moons. He is also known as the first person to record his observation of the sky using a telescope, which he engineered based on the optical spyglass. Not many people know that he also played an important role in art history and that his planetary sketches are one of the first examples of modern Space Art.

So, what’s the connection between Galileo, Space Art, and the Moon? Since the beginning of time, people have been stargazing and trying to recreate what they see, whether purely as an artistic impression or as an illustration of a more scientific text. What Galileo did was groundbreaking – in 1610 he took his telescope prototype and aimed it at the Moon. He debunked the thesis of the body being perfectly smooth, mapping the satellite’s terrain. Galileo published his discoveries in a text called Sidereus Nuncius (Starry Messenger in Latin), noting the first topographical description of the Moon’s terrain. The sketches and the descriptions became a basis not just for astronomers – but also for generations of artists to come.

The Sidereus Nuncius chalcographs are safely stored in the National Central Library of Florence, together with seven watercolor paintings presenting the Moon phases. A keen artistic eye will notice the perfect use of shading, used by Galileo to present the planetshine.

Galileo most likely never considered a serious career in art, so we can safely say he didn’t create these sketches to achieve realistic perfection, but the lifelike effect was absolutely achieved thanks to the astronomer’s long studies in drawing and painting. Sources point out that he even taught perspective and chiaroscuro in the Florence Academy of the Arts of Drawing and possibly painted a few (yet to be attributed) self-portraits. Many art historians studying the Renaissance period point out that Galileo used to hang out among the artists, such as Tintoretto, Ludovico Cigoli, or Justus Sustermans. The watercolors and chalcographs are also considered to be the first examples of art called Selenography – mapping the surface and physical features of the Moon.

A strong echo of Galileo’s Moon theory can be observed when analyzing the paintings of Ludovico Cigoli, a late Mannerist and Baroque painter. As we know from Galileo’s preserved letters, these two were good friends, which explains Cigoli’s early reception of the yet-to-be universally accepted theories. The Italian painter was the first one to start painting the “Galilean Moon”, with its crater spots and irregular terrain. We can find an example of Cigoli’s Galilean Moon in the fresco of the Capella Paolina (in Santa Maria Maggiore) dome. Ludovico Cigoli was also a vocal supporter of Galileo’s theories, claiming that the astronomer’s artistic studies only helped him in observing the planets.

It’s important to note that Cigoli’s decision was not just a move towards better astronomical accuracy, but also a slight controversy. The imperfect moon is barely noticeable in the huge Capella Paolina dome fresco – but such representation most likely couldn’t be part of a bigger painting. The Galilean observations of the moon were problematic for theological viewpoints, where the moon, a pure and unblemished planet, is a representation of Mary’s virgin purity.

Cigoli also followed Galileo’s observations painting the moon in his Adoration of the Shepherds with Saint Catherine of Alexandria. Originally an altarpiece, the painting can now be seen in the Metropolitan Museum of Art in New York. If you can take your eyes off this beautiful scene (the colors! the cute little cherubs! Mary’s proud mother’s eyes!), look through the window of this Bethlehem cave.

The moon is presented with shadings presenting the light reflecting on the planet – once again not perfectly round but in its crescent phase. The same shape can be noticed in Tintoretto’s Maddalena Penitente.

Another echo of the Galilean approach can be found in Adam Elsheimer’s Flight into Egypt. This beautiful nocturne depicts the Holy Family’s journey towards Egypt, where they had to flee from the Roman oppression. The artwork was completed in 1609, around the same time when Sidereus Nuncius was first published.

The moon isn’t a giant, perfect globe anymore – the shadings used by the artist create a clear texture, where darker spots could be craters. Also, the stars are worth noting. The Milky Way depicted by Elsheimer is atypical to the earlier representations too. Here it appears not as a silver cloudy haze but rather a cluster of singular, distinct stars scattered along the sky.

We can describe the relationship between Galileo and the visual arts as mutually beneficial. He only turned to astronomy when 45 years old – and his previous studies and a trained eye proved themselves useful. Thanks to his skills, he could illustrate his treaties with near-perfect accuracy, visualizing his new discoveries. His understanding of how chiaroscuro worked, also could help him realize that the forms he observed through the telescope were craters and mountains, forming the moon’s texture.

I'm still mastering the art of writing bios, so in the meantime let me throw you five random facts about me: I work in the DailyArt Magazine as the Assistant Editor and the Social Media Manager I wrote my MA thesis about astronomical accuracy in Space Art I have three adorable guinea pigs I am a fan of weekend getaways I have two spleens (why? nobody knows.)