Johannes Vermeer is both one of the most loved and most mysterious painters in European art. Moderately known during his lifetime, completely forgotten after his death until the 19th century, he is now one of the brightest stars of the Dutch Golden Age. Only 35 masterpieces are now attributed to him and on most of them, we can spot the same everyday objects jewelry and interior decoration items. Among them is the painting with Cupid—painted-within-a-painting by Vermeer four times—each time a little differently. What is his secret?

This story is based on the research done in preparation for the Staatliche Kunstsammlungen Dresden exhibition Johannes Vermeer. On Reflection. Originally, this sold-out exhibition was to last until January 2nd, but on the basis of the current Corona Emergency Ordinance in Germany, the exhibition is closed from 22 November until 12 December 2021.

This year, Dresden, the capital of Saxony in Germany, is the main place to be for all Vermeer lovers. The exhibition Johannes Vermeer. On Reflection presented in the Staatliche Kunstsammlungen Dresden collects ten Vermeer paintings from around the world, accompanied by a selection of 50 works of Dutch genre painting that illustrate relationships and interactions between the works of Vermeer and his contemporary artist colleagues. Ten of the 35 masterpieces attributed to him – that is a real treat! But the jewel in the crown is this one – a recently renovated Girl Reading a Letter at an Open Window from SKD’s collection. From 1979, thanks to the X-ray analysis, it was known that it had an overpainted figure of Cupid on the wall in the background. This year, the restorers brought the little god of desire, erotic love, attraction, and affection to the daylight.

The painting-within-a-painting of Cupid was covered for unknown reasons in the 18th century. The museum conservationists cleaned the painting and removed the overpainted layers. You can read more about the whole process here. As a result, the painting, now looking like it was finished by the artist yesterday, made art historians rethink how Vermeer’s masterpiece should be interpreted.

Cupid, the naked blond-haired god of love, is holding a bow in his right hand and gazing out at the viewer from the picture on the wall, enclosed by a thick black frame. There are arrows lying on the ground and the god of love is treading on the masks of lying before him. His left side is covered by  green drapery. Without Cupid, the painting showed just a beautiful girl focused on reading a letter, standing by the window. With him we can say one important thing – love is in the air (or to be more exact – on the wall). Through this little god, Vermeer makes a fundamental statement on the nature of true love, beyond the superficial romantic context.

Generally in the artist’s oeuvre, Girl Reading a Letter at an Open Window marks the beginning of a series in which individuals, generally women, pause during an activity to find a moment of calm, and to reflect. Through details, this painting is directly linked to three other masterpieces, two of which are shown in the exhibition. The Delft artist changed the display and number of elements on them but they all have one constant – the figure of Cupid himself.

Around 1656/57, Vermeer included a similar Cupid painting on his Maid Asleep (from The Metropolitan Museum of Art collection, not on show in Dresden). On the upper left corner of the painting, we see a dark shadow of a little part of the painting hang on the wall. To be exact, we only see someone’s legs and a mask – looking very similar to what we see in Dresden.

The painting of Cupid appears again in Vermeer’s Girl Interrupted at her Music, dated to around 1658/59. As in the Dresden masterpiece, the picture of Cupid was once overpainted, but these add-ons were removed in 1907. Unfortunately, not much more can be said about the painting-in-a-painting because of the poor state of the work’s preservation. We can trace a bow and maybe some arrows, but whether the masks were included is now impossible to say.

Ten years later, in 1670-1672, Vermeer used the painting of the cupid for the last known time in his work Lady Standing at a Virginal. Here, Cupid is portrayed in full, in the same pose as in Dresden, except for his right leg, which gives the impression of movement. In this painting, Cupid’s left hand is finally visible – he holds a playing card. Or a letter. Something white and small. We will come back to this thread later.

The use of the same painting in four works lead to speculations that it was based on an actual painting that was owned by the artist. In all four Vermeer masterpieces, the painting-within-a-painting was depicted in a similar viewpoint. As Cupid was reproduced over a period of about 15 years, it is difficult to talk about any coincidence – especially since we know that the inventory of Vermeer’s estate, compiled after his death in 1676, mentions an artifact “from the upstairs backroom” referred to as “Cupid”, which could be this painting.

Art historians tried to track it in the vast history of auctions and sales of works of art, but it proved impossible to find. But, what is interesting, based on Vermeer canvases they tried to estimate the size of the real Cupid painting – it should be ca. 115 x 85 cm, so quite large (bigger than most of the scenes painted by Vermeer).

Another question is – who could be the author of the lost Cupid? Art historians try to link it with the name of Caesar van Everdingen, a Dutch Golden Age portrait and history painter who painted numerous depictions of similarly proportioned naked putti (nude child figures, often with wings). What can be told for sure, is that the painted Cupid 100% belongs to the pictorial tradition of portraying a full-figure, life-size Cupid alone, combined with symbolic gestures and motifs. Other great painters from this time made this motif quite popular. Rembrandt painted Cupid blowing a bubble in 1634, the little god of love was also often presented with a golden balance, pair of scales, and of course, with wings. 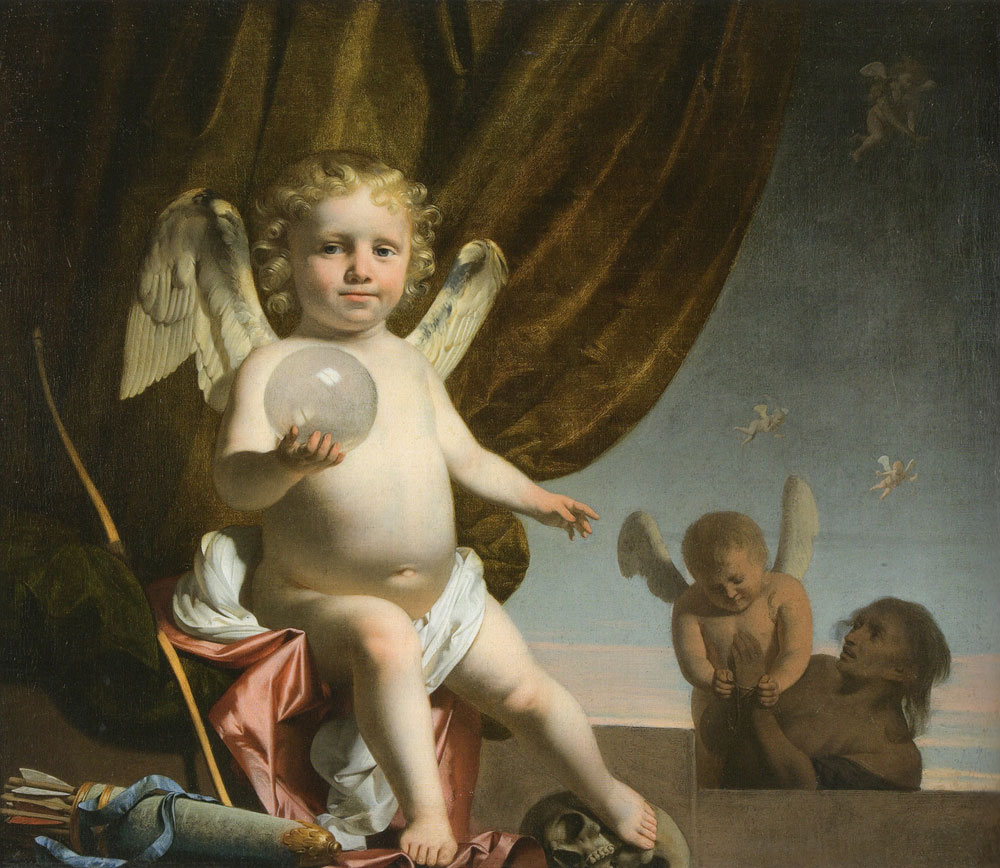 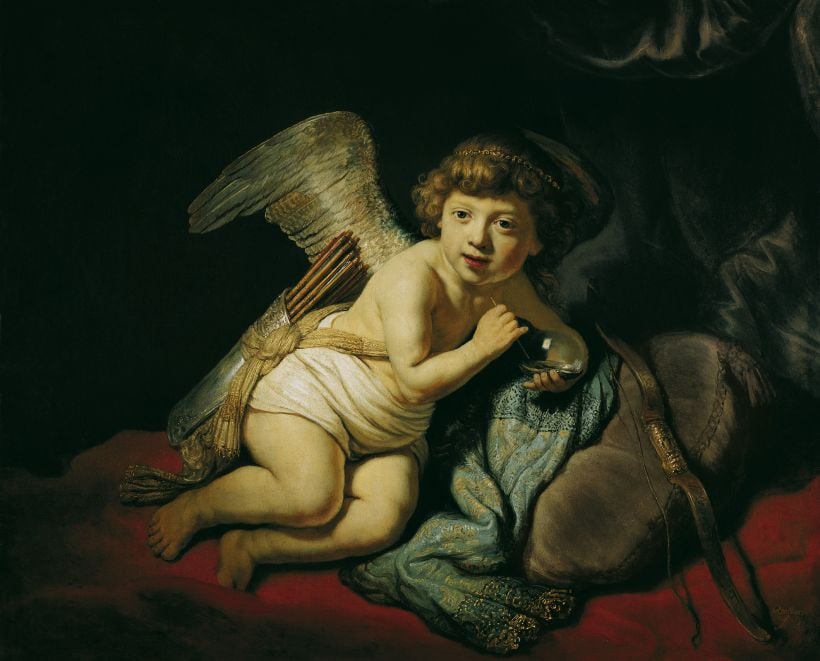 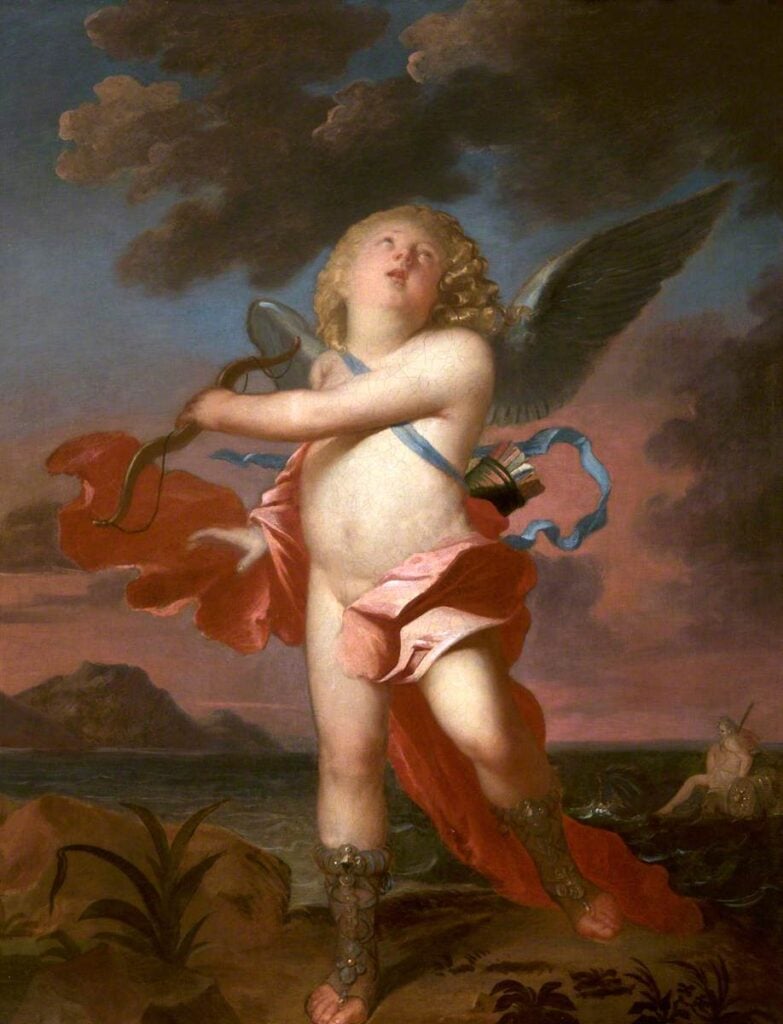 Cupids in Baroque art were presented with various artifacts.

Most popular ones where the bow and the arrow, which were used by Cupid to shoot to people who after this attack fell in love.

The Greek and Roman god of love was the son of Venus and Mars.

The Emblems and Symbols

But what really increased Cupid’s popularity in the arts, was the appearance in the series of emblem books in the first quarter of the 17th century. These books presented a visual depiction (icon) with a short caption (lemma) and explanatory text or verse (epigram). For example, Cupid from a 1601 publication consisted of a verse: “You ask what love is” (it seems like the painting from Vermeer’s paintings answers this question). Also, other elements from the Cupid paintings may be explained by the emblems. In Otto van Veen Amorum emblemata, which is not only the largest but, from a European point of view, also the most influential collection of love poems ever published in 1608, the mask that is thrown to the ground and shattered signifies the contempt for deception and the duality of human nature. For this reason, Cupid tramples the mask, as a sign of deception, to emphasize that the love is sincere and candid.

Another symbol is the thing held by Cupid in the Lady Standing at a Virginal. Recognized by some as a card, it is linked to the emblem by Otto van Veen, which shows Cupid in landscape holding a tablet with the number one on it topped by a crown of laurels. It would mean that there is only one real love.

But another interpretation says that it is not a card but a letter, folded and sealed, which was a very common theme in Vermeer works. It makes sense because during his lifetime letter writing was a vital and thriving cultural activity (for romance as well). Another emblem by Veen speaks for this interpretation: entitled “In the letter we see those absent” in this case meaning that no matter how far our loved one is, we can see and speak with those who are not present through the written word. With this explanation, Cupid would be also a messenger of love.

Finally, after the restoration, the Dresden painting makes a clear statement: it is a love scene. We look at a girl who is reading a love letter – or a letter from someone she loved. A husband, or a lover? Is the news positive for her? Is she waiting to unite with this person? We can’t tell. Vermeer doesn’t give us any suggestions, the girl’s face is focused but emotionless. The revealed Cupid is not a silent witness of the scene, though. He is an active member, by taking action and trampling over the mask, he is showing the true face of love, decent and faithful. He is showing us the right choice. This is a suggestion that everything finished well in this story.

From Specimen to Contemporary Taxidermy

There are many media through which artists can express their own vision, approach their aesthetic feeling, and capture the reality that vanishes in...