Painting Of The Week: Johannes Vermeer, View Of Delft 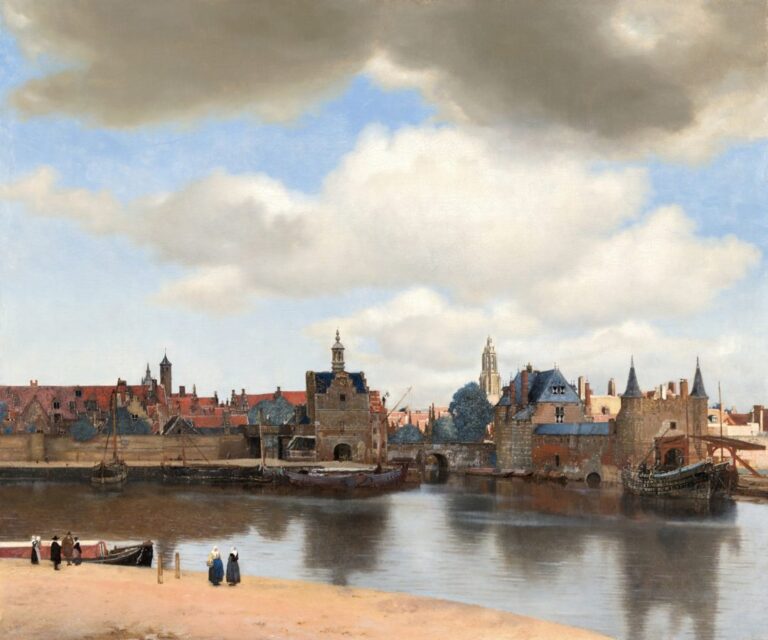 Ever since I saw the View of Delft in the museum in The Hague, I have known that I had seen the most beautiful painting in the world.

- said Marcel Proust about Johannes Vermeer's View of Delft. The writer also featured it in his famous novel In Search of Lost Time. This magnificent townscape of Delft has always been regarded as one of Vermeer's greatest masterpieces. In the mid-nineteenth century, this exact painting was the inspiration for the French critic Théophile Thoré to rediscover Vermeer. [caption id="attachment_14565" align="aligncenter" width="700"] 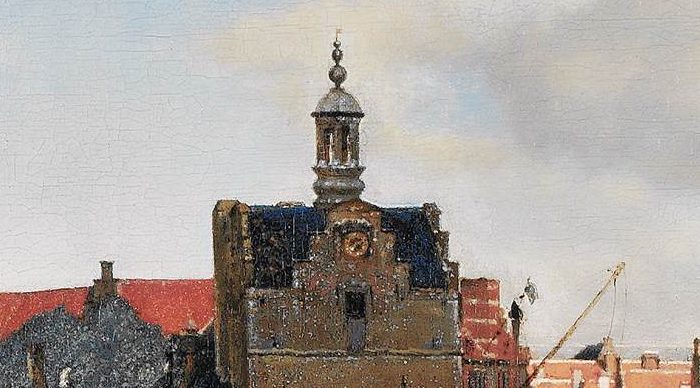 Johannes Vermeer, View of Delft, c. 1660 - 1661, detail, Mauritshuis, The Hague[/caption] We are looking at Delft from the south. A tiny clock on the Schiedam Gate shows that it is just past 7 o'clock. We see the interplay of light and shade, the beautiful cloudy sky and the subtle reflections in the water. There is hardly a breath of wind and the city is quiet. [caption id="attachment_14562" align="aligncenter" width="350"] 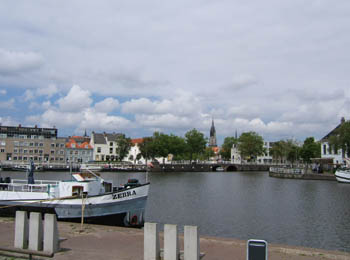 Johannes Vermeer, View of Delft, c. 1660 - 1661, detail, Mauritshuis, The Hague[/caption] Vermeer included about 15 figures in his painting. The six figures in the foreground are dressed according to their social standing. The three burgers on the boar are having fashionable black attire, while the women have simpler regional or peasant garment of black skirts and jackets with white collars. The artist while working on this masterpiece mixed grains of sand into some of his paint to achieve a certain texture and a three-dimensional effect. An examination of the picture has revealed that the sand was added to the ochre used on the window frames of the long building to the left, behind the ramparts, giving a greater reflective quality to the paint surface. Vermeer also used the camera obscura in this piece, a great contraption for allowing a painter to focus on each aspect of a scene. In View of Delft, he picked up on details that would not have been visible to the naked eye. Camera obscura is the natural optical phenomenon that occurs when an image of a scene at the other side of a screen (or for instance a wall) is projected through a small hole in that screen as a reversed and inverted image (left to right and upside down) on a surface opposite to the opening. The surroundings of the projected image have to be relatively dark for the image to be clear, so many historical camera obscura experiments were performed in dark rooms or within a box. Camera obscure with a lens in the opening has been used since the second half of the 16th century and became popular as an aid for drawing and painting. Today painting is one of the pearls of the collection of Mauritshuis in the Hague.