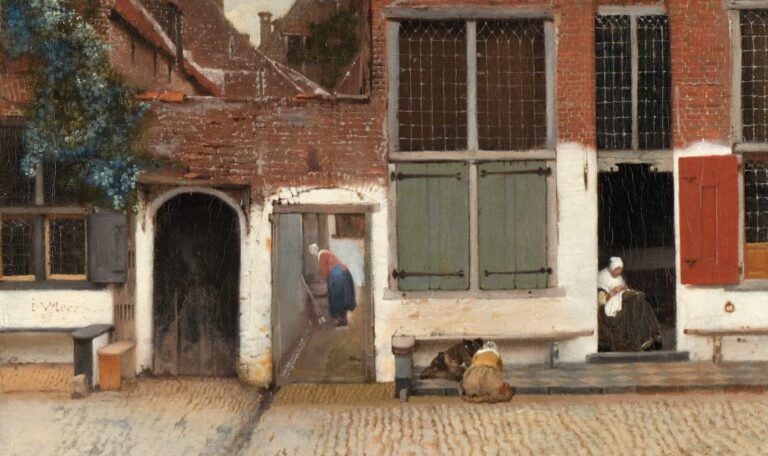 One of the unquestionable masters of Dutch genre painting was Jan Vermeer. However, today I want to present two less known painters: Peter de Hooch and Jan Steen. Ready for some Dutch interiors?

Genre painting was not simply a depiction of ‘everyday life’, but incorporated other elements which conveyed an underlying moral message. They often included other genres too, such as still life, landscape, allegory or portrait.

Born in Rotterdam in 1629, possibly was trained by Dutch landscape painter Nicolaes Berchem. Became especially known for perspectival views which influenced the slightly younger Vermeer. Later in his career, he moved to Amsterdam where he painted fashionable places and portraits.

In this painting painted every single brick in the paved courtyard, which created a believable celebration of a comfortable domestic life and illustrated that a woman’s place was at home. To underline a moral message, or for a greater veracity, he incorporated a late-medieval inscription tablet from a demolished convent in Delft, which said: ‘This is St Jerome’s Vale, if you wish to repair to patience and meekness. For we must first descend if we wish to be raised.’

De Hooch often manipulated existing architectural components to create different settings. He was especially famous for his ‘doorkijkjes’ that are views through windows and doorways into other interiors.

Was born in Leiden in 1625/6 to a local Catholic brewer and probably trained with a landscape painter Jan van Goyen. He’s best known for his witty genre paintings which carry a moral message (many of his paintings depict proverbs), and in which he often included himself. For example, here the rabbit is a symbol of lust while the birdcage symbolises the girl’s virtue, which will soon be lost like a bird escaping from its cage.

On the contrary to what he might seem, Steen was a well-educated and sophisticated painter. It has been suggested that his painting is a deliberate parody of Raphael’s School of Athens, which Steen would have known through prints.

This is a typical ‘disorderly household’ in which Steen illustrates a contemporary proverb about setting an example to your children. Note the oysters on the table (an aphrodisiac) and the emphasis on drink. Steen’s family modeled for this painting: his first wife stood for the ‘loose’ woman on the left, while three of their children are included on the right.