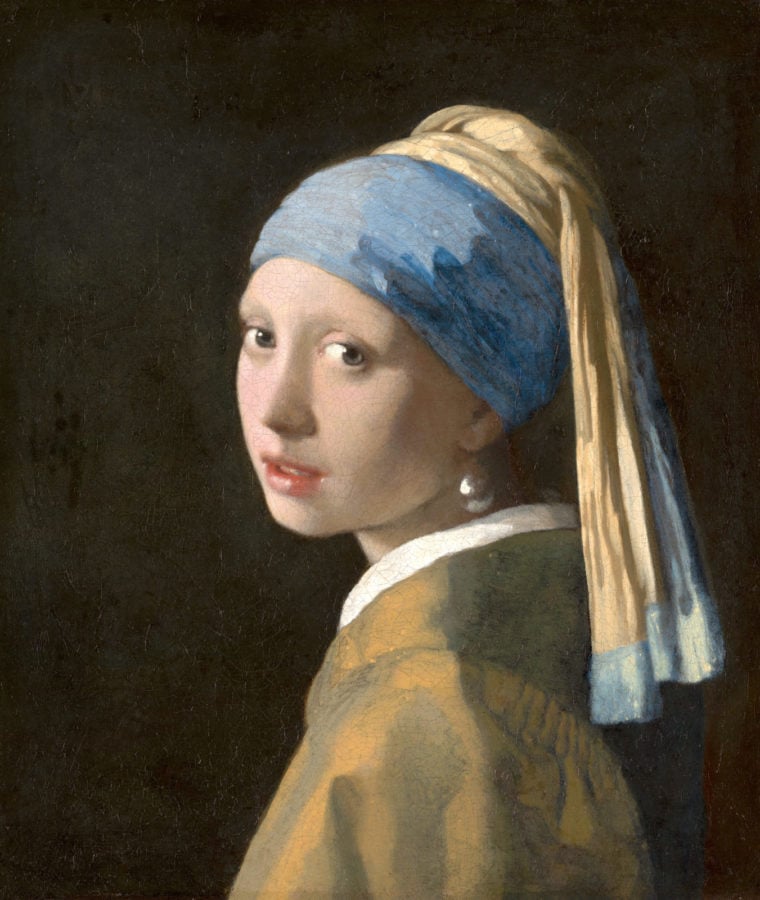 The Dutch and Flemish Baroque of the 17th century is mostly known through the works of Rembrandt in the Dutch Republic and Rubens in Flanders. However, during this period, genre painting, the painting of everyday life, flourished as well. An especially interesting category is the tronie.

Girl with a Pearl Earring

Probably the most famous tronie is The Girl with a Pearl Earring by Johannes Vermeer (1632-1675). The painting depicts a Dutch girl dressed in oriental costume with a turban and an excessively big pearl earring.  She is sometimes referred to as ‘’The Mona Lisa of the North’’ due to the mysterious look in her eyes that makes her expression unrecognizable. The painting inspired a novel which, in turn, led to a movie and a play. Vermeer displays his mastery over light, seen in the softness of the girl’s features, the shine on the pearl and the flickering light on her parted lips. Here you can find more info on the painting.

Girl with the Red Hat

A girl wearing a lavish red hat leans against a chair and directly engages the viewer. It is an intimate piece and one of the smallest works by Vermeer. The sumptuous red of the girl’s hat along with the lush blue of her clothes are the most arresting features of the painting, emitting a sense of warmth. The light caresses her face and puts a shine on the pearl earrings she is wearing. The young woman’s lips are parted in an expectant expression.

‘Tronie’ of a Man with a Feathered Beret

A man turns his head and looks at the viewer with an annoyed or arrogant expression. Rembrandt imagined an eclectic, old fashioned costume for this character, a soldier as marked by the metal collar, called a gorget, on his neck. He is dressed in a grand black feathered beret with an ostrich feather, highlighted by the monochrome background, a cloak with gold embroidery and a gold earring. Each element of the costume is used to demonstrate the painter’s skillful technique. It seems that Rembrandt used his own features as a template for the character’s face as he bears a resemblance to the painter.

Bust of an Old Man with Turban

This is one of Rembrandt’s earliest tronies. Essentially, it is a study in lighting, a way for the artist to experiment with lighting effects. Here the light comes from the background casting a strong shadow on half of the man’s face. The transition from light to shadow is subtle and masterfully executed. Strong contrasts shape the figure’s face as his lines and wrinkles catch the light; his nose and beard reflect light as well. The old man is wearing an ornate turban with sparkling gold embroidery while the red gem on the clasp brightens the shadow area.

A young boy bursts in a buoyant laugh. He has seen something outside the painting that has lifted his spirits. Frans Hals (1582-1666) has succeeded in the challenging task of capturing the boy’s impulsive expression, one that we seldom see in 17th-century Dutch painting. The artist painted the boy in his distinctive style of energetic but careful brushstrokes, adding to the cheerful atmosphere of the piece. Considering the spontaneity of the theme and the execution, it is no wonder that the Impressionists of the 19th century deemed Hals their forerunner.

This man must have swallowed something extremely foul tasting. His features have deformed expressing utter disgust, an emotion so violent, the viewer almost feels it. His clothes and cap are simple and worn; he is probably a peasant. The artwork is dedicated to the sense of taste but with a twist. This is something very unusual as we rarely see paintings with people actually eating or drinking. Such aspects make the painting unique. The work is by Flemish painter Adriaen Brouwer (1606-1638). Brouwer loved to paint peasants and genre scenes usually set in taverns and instilling his subjects with intense emotions.

Yet another piece by Brouwer. A young man looks at the viewer and makes a mocking gesture. He is a peasant like the man in The Bitter Potion and is portrayed as unrefined and ill-mannered, a stereotype according to the city dwellers of the 17th century. The painter presents the coarse behavior of peasants as a cautionary tale about their moral failings to instruct urban populations about proper behavior. However, he has managed to capture a very real and very shocking, if somewhat comic, expression. The painting style of small, dynamic brushstrokes reminds us of Frans Hals.

Tronies are a truly fascinating group of paintings. Through them we perceive the creative spirit and imagination of the artists who conceived them. It is remarkable that even though tronies depict unidentified sitters, through the immediacy of their expression we feel like we know them.