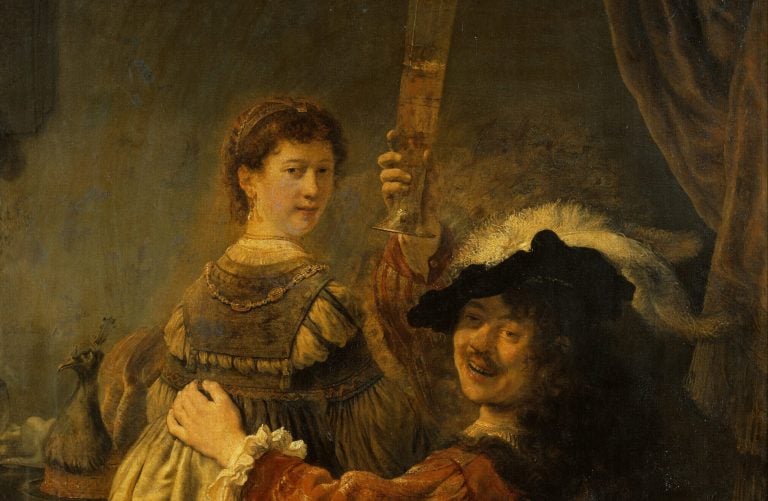 Rembrandt van Rijn, The Prodigal Son in the Brothel or Rembrandt and Saskia in the Parable of the Prodigal Son, ca. 1637, Gemäldegalerie Alte Meister, Dresden, Germany. Detail.

Oktoberfest, as the name suggests, is a traditional German beer festival held annually in October. Last year, the festival was unfortunately cancelled due to the coronavirus pandemic. However this year, it is not the case, as it is starts on 17th September! For those who cannot attend this year’s beer fest, we will try to make this up by offering exquisite examples of beer in art!

Let us first explain what the celebration is about: it is the world’s largest Volksfest which usually runs from 16 up to 18 days from mid-to-late September. It is located on Theresienwiese (d’Wiesn) located not so far from central Munich. The name of the space originates from the first Oktoberfest, which was held in honor of Crown Prince Ludwig of Bavaria and Therese of Sachsen-Hildburghausen, who were getting married.

1. Prost to the Prodigal Son!

Perhaps the most famous example here. Rembrandt van Rijn, the ultimate Dutch master who infamously portrayed himself as the Prodigal Son with his wife Saskia van Uylenburgh. This scene was set in a biblical context depicting a man toasting with a beer glass. Don’t you agree that it perfectly renders the merry atmosphere of Oktoberfest?

A similar elegant beer glass is depicted on a Dutch still life by painter Jan van de Velde III, who juxtaposed locally produced Dutch beer with wonders from far lands, such as the Chinese porcelain plate and tobacco.

Although we are probably more likely to picture Vincent van Gogh drinking absinthe in a Parisian cafe, he was also keen on beer. It helped him start conversations with the surrounding members of the artistic bohème.

This poster was commissioned to Alphonse Mucha by a brewery in Meuse, a city located halfway between Paris and Strasbourg in Lorraine. It shows a woman wearing a crown of poppies, wheat, and hops in her hair and holding a pint of beer (although her grip looks pretty risky). Her features recall Mucha’s figure of Summer which he painted for the Seasons series a year before.

Meuse was known as a rich brewing centre, housing 40 breweries in the mid 19th century. However, from the 1870s onwards, competition and industrial mergers led to the closure of many of them. The poster incorporates an image of the goddess of the river Meuse on the left and a bird’s eye view of the brewery, both painted by an anonymous artist.

Who could portray beer better than the Germans? Eduard von Grützner was most known for genre scenes depicting monks consuming beer. Since the Middle Ages, monks were known to build their own breweries and produce this refreshing beverage.