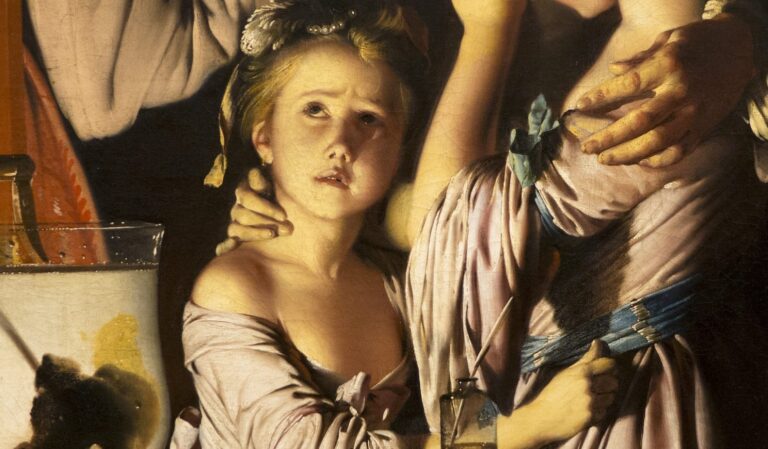 Artists of the turn of the 17th and 18th century started to secularise traditional subject matters: science and intellectual exploration began to replace religion and dogma, which greatly shifted the course of the represented world and of intellectual understanding. Joseph Wright ‘of Derby’ was one of them in the era of Enlightenment.

Wright was the first artist to depict industry and the scientific experiments of the age: such a choice of subject matter was a radical departure from mythological or historical scenes popular in Baroque. His paintings also convey a sense of awe at man’s achievements, a feeling previously reserved only for religious iconography Here Wright shows a traveling experimenter at the home of a well-heeled family. He is drawing air out of a glass jar with a white cockatoo. He wears a red bathrobe and looks a little like a mad scientist, doesn’t he?

Orrery was a mechanical model of the solar system, or of just the sun, earth, and moon, used to represent their relative positions and motions. It was named after the fourth Earl of Orrery, for whom one was made. People kept such instruments like orreries, air pumps, barometers, and electrical machines in their parlors, that is scientific furniture. The philosopher from the title might have been of the kind who travels around the country, and might have belonged to the Lunar Society founded in 1764-65 since Wright made many portraits of its members.

Here Wright uses the typical image of Christ in Bethlehem for his images of forges but instead of a glowing image of Christ, Wright puts in a glowing piece of iron being hammered. Wright was a friend of Erasmus Darwin, the member of the Lunar Society and an outspoken atheist (he painted his portrait at least 5 times). Darwin believed that the process of creation was only a matter of warmth and heat. Wright seemed to equate the two in this painting.