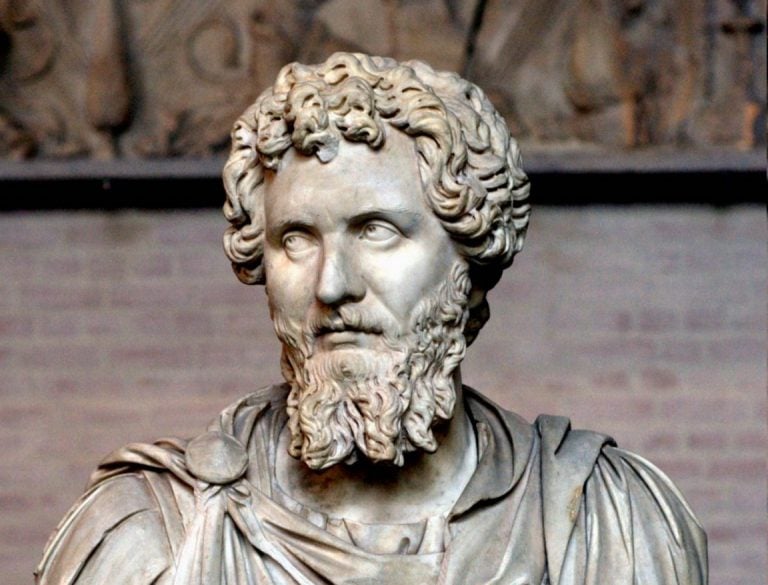 Can You Beat This Beard? – Bearded Paintings From Art History

How many times have you walked into a museum full of statues or busts and not been able to tell one ancient sculpture from another? It can be intimidating to stand in a room of marble statues, and it can be tough to absorb any information about them when you don’t have a concrete system to build off of. This guide can help you identify down the Roman Emperor in front of you by simply looking at his beard.

Just like today, hairstyles in Ancient Rome were constantly in flux, going in and out of fashion every few years. And because these trends shifted at the same time that marble carving techniques evolved, it’s possible to narrow down the time period of a sculpture of any Roman emperor just by knowing a few things about his beard. There are a lot of Roman Emperors, (70 to be exact) so this article is only going to cover the facial hair trends of the first 230 years of the Empire.

The first four Roman Emperors (that would be Augustus, Tiberius, Caligula, and Claudius) thought that youth was all the rage. They made a point of being clean-shaven in public and opted for smooth, youthful-looking statues even in the later years of their life.

On their sculptures, the hair that they did have was lightly carved with few deep impressions. The first three sported nearly identical loosely flowing locks, while Claudius was a bit of an outlier with much shorter, tighter curls that clung close to his head. In fact, rowed curls like his are pretty rare for Roman emperors, so if you see them, think Claudius.

Another note to consider is that Caligula, the third Roman Emperor, was not just famous for his youthful appearance. He was known for being tyrannical, eccentric, and a little crazy. Among other things, he tried to appoint his horse, Incitatus, as consul!

Generally, sculptures of controversial or cruel emperors like Caligula (or Nero who comes next), are extremely difficult to find because after their deaths their successors have public works of them destroyed or beheaded in an effort to distance themselves from their unpopular predecessors. So, if you’re trying to guess which emperor you’re looking at, odds are it’s probably not one of these two.

The infamous Nero is next. Nero broke the mold in more ways than one. He was accused of setting the Great Fire of Rome and then cheerily playing his fiddle while watching the city burn, trying and failing to drown his mother, and (most importantly) growing an outrageous-looking neckbeard.

For statues of Nero, the carving remains in relatively light relief, with softly defined loose curls framing his head.

Beard Is Bad, Old Is Fine – Vespasian & Others

As I am sure you can imagine, rulers succeeding Nero wanted to avoid any comparisons with their unpopular predecessor, so beards remained out of fashion for a long time afterward. It’s important to note that most emperors commissioned their own statues; their appearance often had more to do with the image they wanted to convey than their actual look, so ages, expressions, and hairstyles were often intentional decisions rather than reflections of reality.

Although they continued to shave, the next six Emperors, (Galba, Otho, Vitellius, Vespasian, Titus, Nerva, and Trajan) commissioned stern, aged portraits, highlighting the wrinkles on their foreheads and often grimacing or frowning at the viewer. Domitian, who ruled in between Titus and Nerva, was a little too vain about his appearance to follow the trend.

These more realistic statues helped these Emperors appear wise, determined, and stable, a stark contrast with the young power-hungry Nero. Vespasian, who commissioned the Colosseum in Rome, even has most of his statues highlight his receding hairline.

The fear of beards continued for 44 years after Nero’s death, until Hadrian entered the picture. Hadrian was generally a well-liked emperor, and he commissioned Hadrian’s wall in Northern England, which still stands today, to mark the northern boundary of the Roman Empire.

Hadrian subverted expectations and adopted a “philosopher’s beard,” or a beard so thick that only philosophers really wore them with any frequency. Modern scholars have a lot of theories about why Hadrian decided to be the first Roman Emperor to go for a full beard. Perhaps he was trying to look more Greek (beards were really common in Greece), appear wiser, or even cover up an unsightly scar on his chin.

Hadrian also pioneered unprecedentedly long, flowing locks of hair, which were sharply defined and very curly. One thing to note about Hadrian’s statues is that while his hair is in high relief, his beard is always depicted shorter than his hair and carved very lightly.

Hadrian’s new style ushered in an era of luscious beards, with nearly every emperor after him opting for some sort of facial hair. Clean shaves became reserved for only a handful of outliers, mostly consisting of emperors who were too young to grow hair on their faces.

Antoninus Pius, who became Emperor after Hadrian’s death, ruled over an era of peace and had second-longest reign of any Roman Emperor (23 years), shorter than only Augustus. He ran with Hadrian’s new style, wearing a beard with an emphatic soul patch and a handlebar mustache. So, if you see an emperor with a pretty average beard length, well-defined mustache, and shaved sections under his lower lip, you can be pretty sure it’s Antonius.

Lucious Verus ruled over the Empire next. He styled his hair into a long chin-beard, accompanying the look with an abundance of tight curls on top of his head. Sculptures of Verus mark the beginning of another trend: carving all of the Emperor’s hair in high-relief. The practice continued for another 53 years (about 10 emperors).

The Emperor after him, Marcus Aurelius, copied the huge hair but went for more of a traditional beard. Basically, if you see thick curls and medium-weighted beards, it’s probably Hadrian or Antoninus Pius. If you see wild beards and super defined curls on top of their heads then you’re likely looking at Lucious Verus, Marcus Aurelius, or Commodus.

That brings us to the clumped beards. The next leap in beard fashion happened after Clodius Albinus stepped up to rule, with Septimius Severus following closely in his footsteps. These two Emperors wore their beards in long segmented curls. Sculptors used a marble drill to create the elongated hollow spirals of their beards. This style was pretty short-lived, so if you see any beards with long curls that stand separate from one another, these two are a great guess.

While it may not be the first thing that comes to mind when you think of the Ancient Romans, people were concerned with fashion trends back then just as we are today. And the desire to fit in with the latest style extended far beyond the emperor. In fact, many of the observations made in this article can be applied to other Romans as well, because people often imitated styles that the emperors made fashionable.

Next time you visit a museum, don’t be overwhelmed by a room of sculptures. Instead, see how many Roman Emperors you can identify by giving a few critical looks to their facial hair!