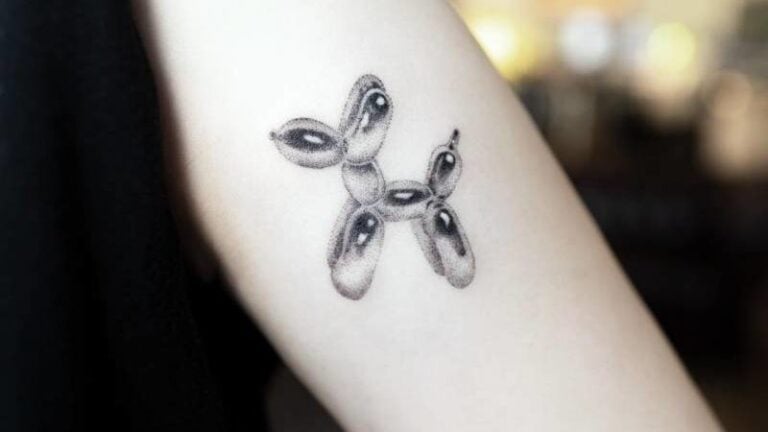 What Makes an Artwork Famous?

Love Art? Get an Artsy Tattoo! It Will Always Be with You

I’m used to more figurative tattoos inspired by classical masterpieces. Have you ever thought about an abstract tattoo though? Here are some that surprised but also delighted me. Why shouldn’t you go for a nice Jackson Pollock? It’s original, and hopefully that’s what you’re looking for in a tattoo design. Let’s take a look at tattoos inspired by modern art giants!

Here we have a take on Pollock’s abstraction by Anton Senkov. The only problem I have with this is the scale. I never understood Pollock’s art until I had a chance to see it live. The sheer size, madness, and three-dimensional feel of his works are mind-blowing. It drags you into itself, too big to perceive with a single look, it overwhelms you. So, for me, the only way to do Pollock justice would be a full-body tattoo, a bit extreme, but also so in line with Pollock’s own art.

From Pollock let’s reach to another extreme, Mark Rothko. Here interpreted by Jamie Luna. While Pollock went for aggression, movement, expressionist swirls, and splashes, Rothko favored rigor. But do not take that for lack of emotion. Rothko’s paintings are like mirrors, we see in them what we feel, our fears and hopes. The abstract fields of color make us free to do with it as we please, but also to succumb to it, to give in to the power of color.

Rothko’s biggest fear was that his art would be perceived as purely decorative. He did not want his works to be considered merely beautiful, he wanted them to be moving and awe-inspiring. In early 1958 Rothko was commissioned to paint a series of murals for the exclusive Four Seasons restaurant in the Seagram Building, designed by Mies van der Rohe and Philip Johnson. Rothko was eager to create a lasting environment for his paintings, but doubts about the appropriateness of the restaurant setting ultimately led to his withdrawal from the commission.

In the mid-1960s Norman Reid, the Director of the Tate Gallery, approached Rothko about the possibility of extending his representation in the collection. Rothko responded by suggesting a group of Seagram murals to be displayed as an immersive environment. This exercise resulted in the major gift of nine murals to the museum. They have been displayed almost continuously, albeit in different arrangements, as the so-called “Rothko Room”.

Continuing to focus on color, let’s take a look at this tattoo by Amanda Wachob next. It is inspired by Yves Klein, it isn’t one of his works but it embodies what he was most famous for – his own color. It is a deep blue hue that was “created” and used exclusively by Klein. In May 1960, Klein registered the paint formula under the name International Klein Blue (IKB) at the Institut National de la Propriété Industrielle (INPI), but he never patented IKB.

Klein was one of the founders of Nouveau Réalisme. In 1958 Klein organized an exhibition with nothing in it (now known as The Void). After removing the contents of the space, he painted all the surfaces white, restricted entry, and set up guards to stand at the door. Following an enormous publicity drive, almost 3,000 people arrived on opening night. They tussled to be let into the empty room. In the end, the police had to be called to disperse them.

Now on to the man who could be called the father of abstract art by taking it to its limits. Kazimir Malevich’s came up with Suprematism, a concept that seeks to develop a form of expression that moved as far as possible from the world of natural forms and subject matter in order to access “the supremacy of pure feeling” and spirituality.

KSU Arrow has a number of beautiful art-inspired tattoos. All of them in lively, vivid colors. Head to her Instagram to look for inspiration. She also travels a lot so you may want to check out when she’ll be in your area.

Oi Tattooer takes us in another direction, from abstraction to absurdity. Jeff Koons took art all the way to its most absurd limit, by making it populist (and making a ton of money in the process). His sculptures of inflatable dogs, Michael Jackson, or his work with Cicciolina have aimed to break all the rules. Also, they made us realize two things in the process. Firstly, how many rules there still are surrounding art. We often think we are so liberated, and yet, kitsch causes outrage. Pornography sold in many shops has no place in galleries. Secondly, all publicity is good publicity; let them speak badly of you as long as they talk about you. Koons followed this rule throughout his career. And yet, this tiny inflatable dog looks so innocent.

Now, this is something was thinking about as I prepared this article. I expected some Banksy’s to come up, and many did, but I was wondering how difficult it might be to tattoo a self-destroying piece of art. Well as Ivan Casabo proved it wasn’t too difficult. Banksy definitely is one of the favorites to get a tattoo of. His black and white work with only single color accents is equally moving on the skin as on the streets.

Joey Hill made this funky modern art tattoo of Keith Haring’s Dancing Dogs. Keith Haring was a popular artist and activist who was part of the legendary New York art scene during the 1980s. Inspired by graffiti artists, he began drawing in New York’s subway stations, filling empty poster spaces with chalk drawings that people would walk past every day. In 1986 Haring painted on a section of the Berlin Wall, in an attempt to “destroy the wall through painting it”. He painted a bright figurative mural using the colors of the German flag. It symbolizes the hope for unity between East and West Germany.

Dogs dancing, barking, or biting recurred frequently within Haring’s work and developed into an iconic image associated with the artist. What later became a dog actually started out as an undefined creature. Haring’s dog (often depicted on two feet) can also be a mythical representation of a human being. Dancing dogs often referenced artistic performance or breakdancing, but Haring’s dogs also stood for Anubis, the Ancient Egyptian god with a jackals’ head who watches over the dead. In Haring’s versions, the image of dogs playing with or crushing small human figures plays into both these Egyptian conceptions of life and death, but also the Christian idea of the “dance of the dead.” Those are definitely dogs with a cause.

I love the simplicity of this design! Lee Ufan’s work inspired Lauren Winzer here. Ufan is a Korean minimalist painter and sculptor artist and academic. He is honored by the government of Japan for having “contributed to the development of contemporary art in Japan.”. His work and writing are central to the Mono-ha movement. Mono-ha, initially used as a derogatory term by a journalist, has become the official name of the avant-garde art movement in Tokyo that happened between 1968 and 1975. The movement focuses on the material, bringing it to its most simple form and often posing against another one to create or evoke a relationship. Countering Frank Stella’s celebrated formula and Minimalist slogan “What you see is what you see”, Lee Ufan favors an alternative, “What you see is what you don’t see”. His works bring the unseen to the fore.

Do you like modern art tattoos? Would you prefer an abstract tattoo? Or a realistic one? A simple piece or one showing all the skills of your tattooist?