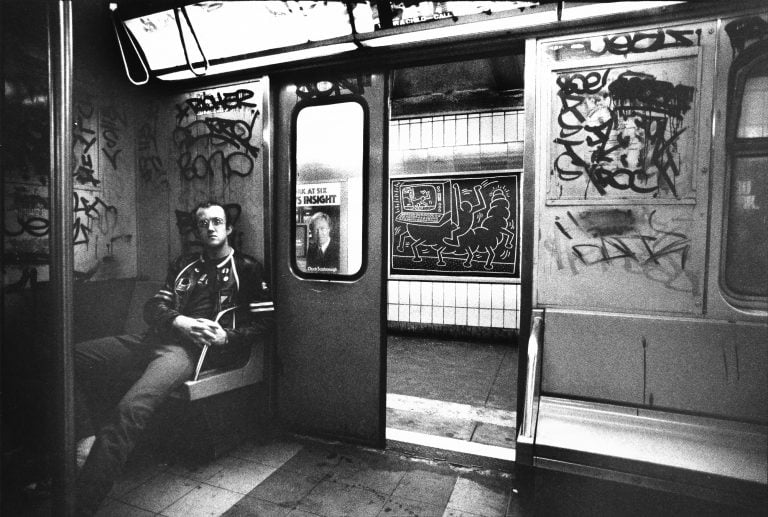 When Keith Haring moved from Pennsylvania to New York City to be an art student, he was inspired by the graffiti art that he saw covering subway cars and walls. Graffiti art was exploding throughout the city. From 1980 to 1985, Haring would create over 5,000 pieces of public art in the subways. While he would not become a graffiti artist, this art form greatly influenced his style and vehicle for creating art. Discover Keith Haring’s graffiti!

While riding the subway system, Keith Haring noticed large black panels of matte paper that were waiting for new advertisements. So, he went to a store and bought chalk. The chalk was perfect for drawing quickly on paper. He would ride around and get off at stops where he saw the black paper. In the time that it took for the next subway car to arrive, he would draw quick, simplified images while being watched by an audience and hoping not to be arrested.

This became a type of performance art for Haring. People would watch, comment, and interact with him while he worked. He said that people always wanted to know what his art meant. Haring used this time to perfect images such as spaceships, “radiant babies”, and barking dogs that would reoccur throughout his artistic career. Keith Haring’s graffiti art was only the beginning.

Underground in the subways, Keith Haring’s graffiti was able to reach a larger audience than a traditional art gallery. He made his art accessible to all and tried to stay away from sexual and political images that would show up in other areas of his work. Subway riders looked forward to seeing his art and, for the most part, left it alone. Creating free art for all helped Haring gain popularity and fame.

Here is an old news clip from CBS News that shows Keith Haring at work.