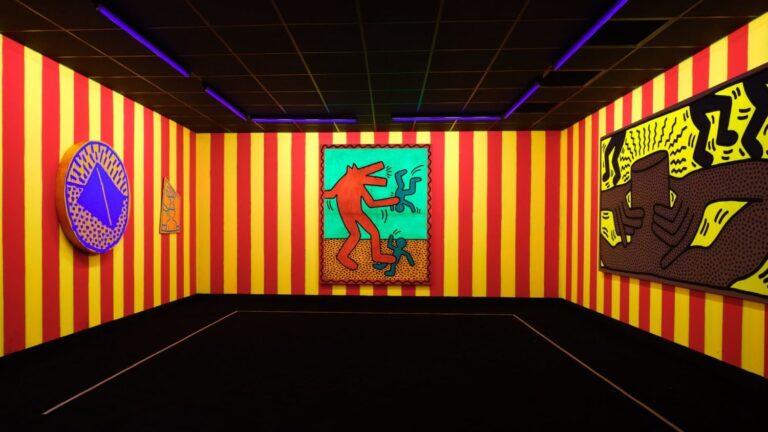 Why do Keith Haring’s works still matter in 2019? With Brexit approaching the deadline, Tate Liverpool welcomes the first major exhibition in the UK of Keith Haring. Here are some highlights at the exhibition that Liverpool millennials think are inspirational at this critical transitional point.

In the era of liberated expressions, visual sensation plays a more significant role in millennials’ life than any other perceptions do. Here at Tate Liverpool, young people can visually relate to the development of Keith Haring’s artistic scope through a multi-colour timeline. This timeline, namely the walls in various colours, seems to be taken from the artist’s palette. Connoting his different life stages, all the wall paints—yellow, red, orange, and blue— also reflect the young artist’s unique way of responding to socio-political, economic and environmental issues.

Haring is good at playing the contrast of different colours, and that always gives people a kind of shock. Yellow versus black is very classic to see in his works. At a corner of the exhibition, the yellow cab hood is revitalised by those hippie doodles. Except on metal pieces, Haring also does experiments on fabrics, concrete and polaroid films. Perhaps Haring’s New York and Beatles’ Liverpool are very much alike: the street is young people’s canvas, and the art speaks the freedom of creativity.

Back to 1980s: How Tate Liverpool Recreates a Nostalgic New York

Haring’s love for Big Apple in the 80s is vividly presented in his street art. In the exhibition, the chalkboard graffiti echoes the artist’s activist interviews being played on the vintage Sony televisions. In the circus-like tent, Haring’s mysterious UV-light paintings are gathered to bring people some retro vibes. The pyramid, Russian dolls and monsters together create a liminal space to invite millennials to mind travel in the artist’s dreamworld. Is it really a circus, an old-school cinema, or a late-night McDonald’s? No matter what people feel connected to, the carnivalesque atmosphere has in a way shown the connection between Haring’s “freaky” side and the underground culture in New York.

If there is an overriding theme in Haring’s series, it would be the celebration of rebellion. A detail easily overlooked by the public is that Haring prefers giving close-ups to the scenarios of these framed celebrations. From women in pregnancy to the new-born babies, the artist empowers vulnerable groups with thick lines which animate their body movements. In many of the paintings, the moment of the genderless’ revolt is compacted into the symbolic broken bond or the interplay between hands and weapons.

While the embracement of womanhood and new-born power demonstrates a sense of positivity, the seemingly absurd celebrations of violence and the cult of celebrity express Haring’s sarcastic attitude towards the media misrepresentation and political agendas. This can be especially seen in the portraits of the public’s worship to the idol, offering criticism of the current issues surrounding social media influencers and politicians.

From his early career to the later AIDS awareness campaign, Haring always summons quirky motifs from both real life and imagination, and then incorporates them in his drawings. The world under his brushes has a density: dolphin man getting ready to jump out of the image, dogs barking at armed humans, atoms preparing to cause a big bang, and UFO always observing chaos above cities… Haring’s mix & match is sometimes straightforward and frequently overwhelming. For millennial visitors, the point of looking at these symbols is perhaps not to interpret what the artist has seen, but to experience the explosion of his thoughts in searching for the artfulness.

​Emily Zirong Lyu is a Young Collective Producer at Tate Liverpool. She is also a member of The Oriental Ceramic Society (UK), doing research on the patterns taken from Yuan-Ming-Qing Chinese ceramics. She is now working on her new art project Atom in Flux (2019). Follow her Instagram and Twitter.