An Introduction to Lee Ufan 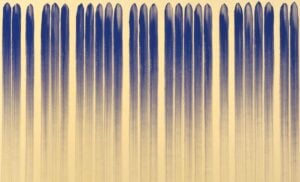 Lee Ufan is a Korean born international artist, whose work is key to the Mono-ha movement. If you have ever been lucky enough to encounter a Lee Ufan in real life you will appreciate its power to bring calm and refresh your view of an object.

The Mono-ha Movement in Japan

Mono-ha means School of Things in Japanese and was originally a derogatory description by a journalist. Now it is the official name of the avante-garde art movement in Tokyo that happened between 1968 and 1975. Instead of traditional representational art, Mono-ha is much more abstract and focuses on materials. The movement was, in part, a response to rapid industrialisation in Japan.

Artist Nobuo Sekine and his friends, such as Susumu Koshimizu and Katsuro Yoshida, created a piece for the Sumu Rikyu Park Contemporary Sculpture Exhibition (Kobe 1968). The work, called Phase - Mother Earth, which consists of a 2.7m dug hole in the ground, was the start of Mono-ha's hey-day. Den-en Chofu Seseragi Park's 2008 exhibition saw the piece recreated.

Mono-ha explores questions of physicality, the limits of creativity and how to rethink the values of Western Modernism.

The artists present natural and industrial materials either on their own or in combinations. Most of the artworks are sculptures or installations and they reduce objects to a primary form. Because it was experimental and often site-specific pieces were usually destroyed since the artists couldn't (or wouldn't) preserve them.

Mono-ha is a contributor to the idea of Conceptual art . It also has things in commons with Arte Povera in Italy and Minimalism in the United States.

Lee Ufan and the School of Things

Lee Ufan was a very significant part of the Mono-ha movement. Nobuo Sekine introduced him to the other artists in his circle and their collaborations shaped the Mono-ha aesthetic.

"The highest level of expression is not to create something from nothing, but rather to nudge something that already exists so that the world shows up more vividly."

Lee Ufan theorised and popularised Mono-ha. His writing and artworks suggest that space and location are crucial to the meaning of an object, and vice-versa.

"What You See Is What You Don't See"

As a painter, sculptor, poet and philosopher, all of Ufan's work draws our attention to emptiness. Blank spaces on a canvas, for example, or untouched areas between two parts of a sculpture. These (non) parts have a huge impact on how we experience a work of art.

Ufan was born in South Korea, began his artistic career in Japan, and now works at his studio in Paris. There is a Lee Ufan museum at Benesse Art Site, Naoshima, Japan (opened 2010) and also the Space Lee Ufan at the Busan Museum of Art, Korea (opened 2014). His art has been the subject of major shows across the world; currently (February 27 - September 09, 2019) the Centre Pompidou Metz is presenting a retrospective of his career.

One of Lee Ufan's most well known works is his Relatum series, which he has been creating since the 1960s. The installations comprise stones in relation with other objects, for example iron plates. The term "relatum" is a radical idea that suggests that art is not an object but a network of relationships.

Lee Ufan's artworks, although seemingly simple, are constructed in a disciplined and ritualistic way. When painting he will position the canvas horizontally. Then he loads a round-tipped brush and fluidly deposits paint in one careful stroke. He achieves this level of control is through meditative breathing. This painting technique is reminiscent of calligraphy. It weaves into the philosophy of Mono-ha with its simplicity and emphasis on a raw mineral colour.