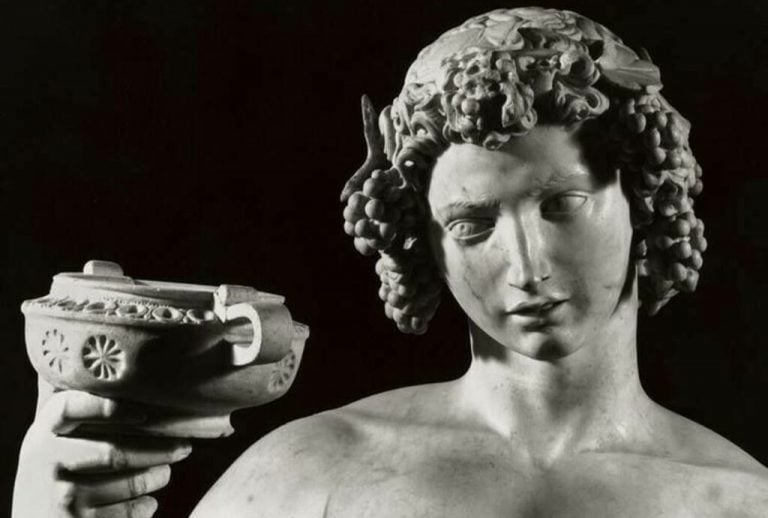 Michelangelo di Lodovico Buonarroti Simoni, known as Michelangelo, is undoubtedly among the world’s most treasured artists. His connection to marble can only be described as a deeply passionate love affair. The enigmatic statue depicting Bacchus, carved between 1496 and 1497, showcases Michelangelo’s astonishing talent. The Bacchus was carved during his early period in Rome but has made its way to Michelangelo’s beloved Florence.

The God of Wine

Bacchus is the ancient Roman god of wine, pleasure, and fertility. He is the son of Zeus and Semele, and the equivalent of the Greek Dionysus. Bacchus may be depicted along with his entourage of Maenads or Bacchae and satyrs. These were impish beings who accompanied Bacchus on his debauchery.

The depiction of Bacchus was a prominent choice for many artists starting from ancient Greece and during the Renaissance. Although the portrayals of Bacchus have varied greatly depending on the artist’s imagination, the iconography of the god of wine unsurprisingly included grapes, ivy leaves, and wine.

In 1496, when Michelangelo was 21-years-old, he carved a sleeping cupid figure that he artificially aged to pass off as an antique. The sculpture was purchased via an intermediary by Cardinal Raffaele Riario of San Giorgio. Cardinal Riario soon learned of the deception but was also impressed by Michelangelo’s unmatched talent. This now-lost carving established the reputation of the young artist. It led to Cardinal Riario’s commission of Bacchus to be installed at Palazzo di Riario, now known as the Palazzo della Cancelleria. Given its pagan nature as well as controversial implications, it was certainly an interesting choice of commission for a Cardinal. However, upon completion of the sculpture, Cardinal Riario rejected it, and it was purchased by the banker Jacopo Galli for display in the Galli sculpture garden.

The Medici family purchased the sculpture around 1571, and Bacchus made its way to the hometown of its creator around the 17th century. It was initially placed in the Uffizi Gallery, and in 1871, it was moved to the Bargello National Museum, where it is displayed today.

The Marvel in Carrara

Michelangelo depicted his Bacchus in the iconic wreath of grapes with an androgynous body that is just past its prime to emphasize the ill effects of excessive wine consumption. Bacchus raises a precariously-grasped cup in his right hand and lion’s skin, along with a cluster of grapes, in his left.

In Roman mythology, satyrs were depicted as half-man, and half-goat. Representations typically include goat’s ears, a tail, and horns as well as an exaggerated erection. The satyr has his left hoof placed firmly on the ground and his right hoof barely touching the base. The satyr has his mouth open to eat the grapes from Bacchus’ hand. Michelangelo illustrated the satyr seated on the wooden stump facing away from the main sculpture, with an upper torso turned toward the Roman god.

The Talent of the Ancient Sculptors

Bacchus is portrayed with his head tilted to the right and mouth slightly open, resulting in a recognizably drunken stupor. There is perceptible movement in the statue with the left shoulder tilted down and the left foot planted firmly by a tree stump to support the ‘swaying’ body, while the right foot barely touches the base.

The incredible detail, as well as the harmony and balance of the Bacchus, emanates the style of Classical statuary and demonstrated that the young sculptor from Florence had grand abilities that rivaled the talents of the Greek sculptors of antiquity.

The Intoxication of Bacchus

The genius of this sculpture is Michelangelo’s incredible skill in conveying a subtle human state without any movement. There is a dynamic effect that suggests instability and a deliberate stagger highlighted by the pose, the precarious grasp of the cup, and most incredibly, the intoxication in the eyes.

The details of how the completed Bacchus came to be rejected by Cardinal Riario and into the possession of Jacopo Galli remain unclear and is subject to wide speculation. There remain only hints from Michelangelo’s letters to his father where he mentioned troubled dealings with the Cardinal. It is possible that the statue was too radical for the Cardinal’s taste and perhaps threatened his position as a Prince of the Vatican.

The Bacchus along with the Pietà are the only works that survive from Michelangelo’s early period in Rome. It is now on display in his cherished hometown in a gallery dedicated to Michelangelo and his contemporaries on the ground floor of the Bargello National Museum.