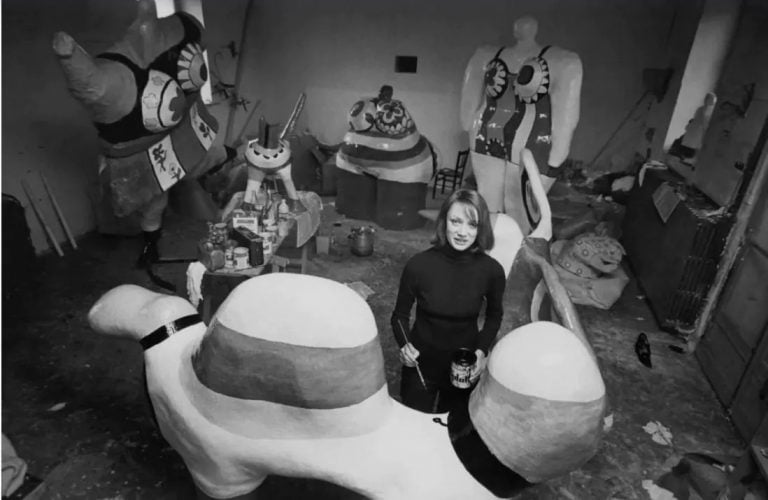 Niki de Saint Phalle was a French-American artist and the only woman within the Nouveau Réalisme group that included Arman, Christo, Yves Klein, Jean Tinguely, and Jacques de la Villeglé. Art was a very important part of her life. It helped her to deal with childhood trauma and ameliorated the state of her mental health. Discover the sculptures of this incredible artist.

She was born in France to a French father and an American mother. Her family used to be wealthy but they lost everything in the stock market crash that began in 1929, a year before Niki was born. She spent most of her childhood in New York where she became a model for Vogue and Life. She was a rebellious soul. For example, she painted the fig leaves of her convent school’s classical sculptures red, and at 18, she eloped with childhood friend Harry Mathews.

While Mathews studied music at Harvard, De Saint Phalle began studying acting. But two years after having her first child, she suffered from a serious mental breakdown and needed to be hospitalized. It was in the hospital that she discovered painting helped her to recover. She gave up acting, moved to Mallorca with her family, and kept on painting in her unique self-taught style. In Spain, she discovered Antoni Gaudí who was her first great inspiration. She began to use diverse materials and found objects as essential elements in her art.

Then, Niki and Harry returned to Paris where she met Jean Tinguely, who would become her future artistic collaborator (and after De Saint Phalle separated from her husband, they moved in together, sharing the same studio and living in an artists’ colony). In Paris, she studied the art of Paul Klee, Henri Matisse, Pablo Picasso, and Henri Rousseau, as well as the work of contemporary artists like Jasper Johns, Willem de Kooning, Jackson Pollock, and Robert Rauschenberg (whom she later befriended).

You Are a Nana

As De Saint Phalle and Tinguely moved to an old country inn outside of Paris at the end of 1963, she began making new types of works, figurative reliefs of women, brides, dragons, and monsters. In 1965, De Saint Phalle made her first sculpture for which she became most famous, the Nanas, with “nana” meaning in French “dame” or “chick.”

They were archetypal female figures, the updated versions of an “everywoman”. A year later, De Saint Phalle came up with Hon (Swedish for “she”), as she worked for the Moderna Museet in Stockholm. Hon would be a building-size reclining Nana with an interior environment that one could enter from between her legs…

From the 1960s until her death in 2002, Niki de Saint Phalle explored the themes of femininity in her colorful and fantastical works. She devoted herself to large-scale projects, such as Tarot Garden in Tuscany, Italy, which houses multiple house-size sculptures inspired by the Tarot cards.

One of the critics said about her:

The French-born, American-raised artist is one of the most significant female and feminist artists of the 20th century, and one of the few to receive recognition in the male-dominated art world during her lifetime.