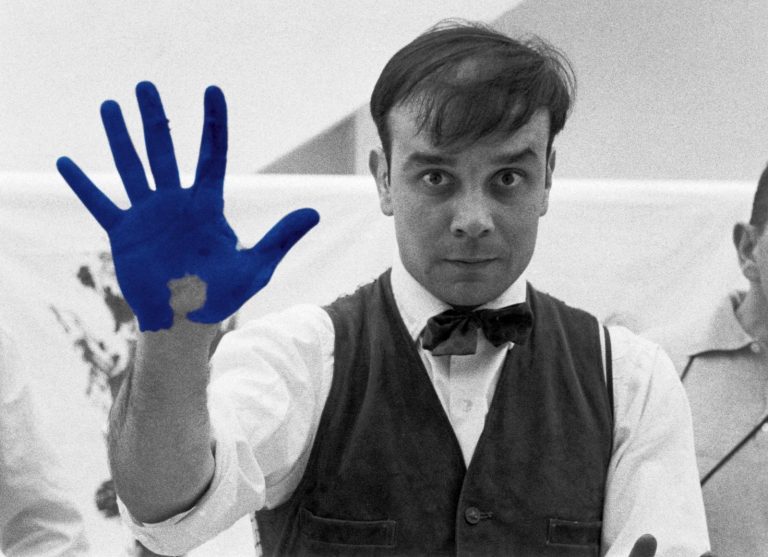 How Yves Klein Played with Gold

Yves Klein was born on 28 April, 1928, in Nice, France. His mother, Marie Raymond, was a renowned member of the Art Informel movement, which involved abstract styles and gesture painting. His father, Fred Klein, was known for his landscapes in a Post-Impressionist style. While he received no formal training from his parents, he was destined for greatness.

In 1942, Klein began studying at the École Nationale de la Marine Marchande and the École Nationale des Langues Orientales. There, he became acquainted with two young creatives who would also go on to become famous in their own rights. Claude Pascal, a poet, and Arman Fernandez, a sculptor, became Klein’s close friends. The three boys shared interests including judo, literature, religious studies, and music.

In Klein’s own account, a pivotal moment in his career occurred when the young men once spent the afternoon on a beach. The boys, just teenagers at the time, metaphorically divided the universe among themselves. Pascal chose the written word and language as his domain, Fernandez chose the physical world, and Klein chose space. For Klein, space represented a vast infinity in which he took great interest. It was this choice that would spark his later fascination with the idea of infinite space, the muse for his work.

After school, Klein began his artistic career with a study of monochromes. In 1956, Klein debuted with a solo exhibition in Paris called Yves: Propositions Monochromes. The monochromes featured three colors: pink, blue, and gold. The audience, however, was disappointed with the exhibition. It was this disappointment that caused Klein to pursue with a singular color.

After the failed Paris exhibition, Klein sought the help of a Parisian art supplier and chemist named Édouard Adam. Together, the men created a shade of blue that would become famous around the world. Made from dry pigment and resin, the new formula was entitled International Klein Blue (IKB).

International Klein Blue is unique in several ways. To create the signature shade, Klein and Édouard suspended pure, a dry ultramarine pigment in clear synthetic resin and other solvents. To maintain vibrancy, a colorless carrier is used, it does not dull individual pigment particles. Today, the only manufacturer of IKB is the Yves Klein Estate. The shade is proprietary (though not patented) and has never been sold or recreated for any purpose.

With the creation of IKB, Klein entered into a period of his career known as the Blue Period. This period featured over 200 monochrome paintings and sculptures that explored the vibrant shade in a number of different ways. Though he did not name these works before his death, his widow, Rotraut Klein-Moquay, would later assign a number to each after his death.

IKB pigment was highly versatile and could be applied with a brush, spray, roller, or placed directly onto canvas. Klein began the Blue Period in 1956 with a series of monochromes that were created using paint rollers, which easily spread the pigment onto a cotton canvas.

Klein continued to experiment with different types of monochromes through the end of his career, but also expanded his work into more unusual and provocative ideas. In 1960, Klein began the Anthropometry series. Works in this period involved nude female models who would cover their bodies in IKB paint and press their bodies against canvases to create prints.

Klein’s expansion into more controversial performance art boost his notoriety in the art community and placed him in the public eye with live performances and exhibitions. Klein continued to work until his death in 1962.

Emma Welsh is a passionate writer who loves putting pen to paper (or fingertips to keyboard) whenever she can. In her spare time, Emma loves to be with her family, enjoying the outdoors and finding the next great taco truck!