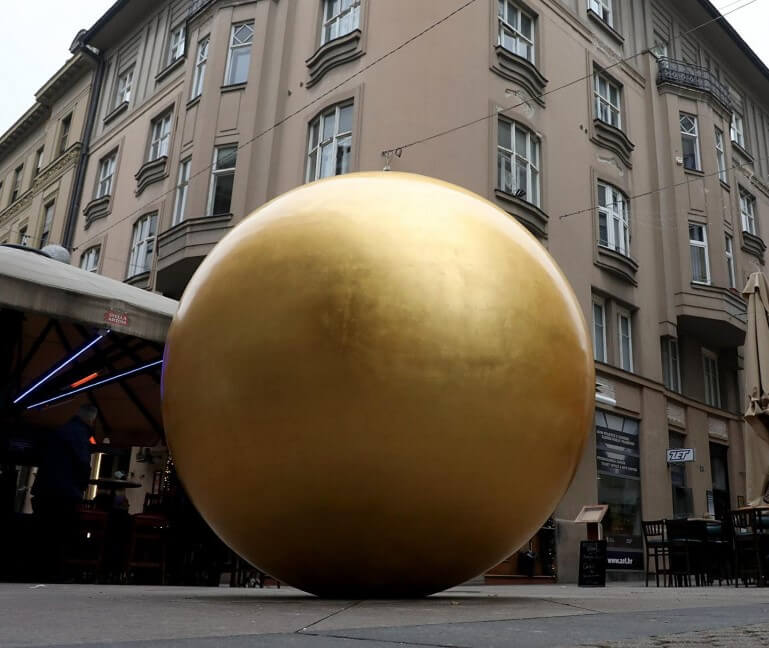 No matter the weather conditions, there has always been sun in Zagreb for the last 50 years, 365 days a year, with few interruptions. This is thanks to Ivan Kožarić, a Croatian sculptor and an artist.

The sculpture Grounded Sun became one of the symbols of Zagreb, the capital of Croatia, but not without controversy. Ivan Kožarić made the sculpture from gold-colored fiberglass, 2 m in diameter, and placed it on the ground in front of the National Theatre in spring of 1971, as a part of the Zagreb Salon, an exhibition manifestation. It was a very busy area and the sculpture stood there for a short but intense period. The large abstract shape of this artwork and its bold placement in one of the busiest areas in the city incited aggressive reactions.

Sculpture as a Challenge

It was something completely new, with its beautiful enchanting glow. The artist was seeking interaction and participation, he offered and challenged. But some citizens did not like the sun set so low. The sculpture was placed secretly, without the permission of the city authority. The next day, a man stopped his car in the middle of the road, got out, and kicked the sculpture hard. On two occasions, black paint was splashed on it. On the night of July 4th–5th, 1971, a flammable liquid was poured all over it, and it was set alight. The amount of negative energy the sculpture attracted is hard to explain. It was too beautiful, too good, and too free-spirited for Zagreb of that time. The burning of the Grounded Sun is considered the first public destruction of a work of art in post-war Europe. It was an act against going beyond given conventional traditional frameworks and gaining freedom of interspace.

Ivan Kožarić was born in Petrinja in 1921 and died in Zagreb in 2020, just a few months before his 100. birthday and opening of his large exhibition in the Museum of Contemporary Art in Zagreb. He completed his studies at the Academy of Fine Arts in Zagreb, but since he graduated in 1949, his work has always been slightly eccentric compared to the mainstream Croatian sculpture scene. He resided in Paris in 1959/1960 and afterward joined the Zagreb-based neo-avant-garde group of artists, GORGONA (1959-1966).

In the early 1970s, he became more radical in his expression. Geometrical forms played a significant role in his work. During that time, he discovered the golden color. He painted his studio, sculptures, and even his shoes gold. This action suggested that things previously considered useless could be made into art at any moment, and, conversely, one could always debate the value of an artwork. He valued the aesthetics of processuality more than the aesthetics of a completed object.

No one took responsibility for burning the Sun. The City Council ordered it to be removed because it was allegedly disturbing the traffic and “had become a target of molestation by unconscious citizens who cover it with various paints, fire, and texts, which altogether make the environment of that ambient very ugly.” They called for “humanistically engaged art that speaks about the life and problems of the nation.” Art critics, on the other hand, praised the work for its “anti-monumental understanding of sculpture placed in an urban setting.” Like some other artists of the 1970s, Kožarić wanted to reach out to people and communicate with them directly, to exhibit art in public space.

The whole day entered into me, with the sun and all its breadth!

Thanks to an art manifestation in Karlovac, a small city 55 km away from Zagreb, the Sun has found its refuge. It was placed in the park near the river Korana, not in urban space, but as an intervention in nature. After the manifestation, it was moved in front of a nearby hotel that was soon renovated, and the sculpture disappeared. It was taken away by cleaning workers, who thought that this perfect sculptural form was garbage.

However, as this work was indestructible and lasting, it remained in the memory of art experts and other sensitive citizens and was re-erected 23 years later.

Whenever the sun shines again, surprises are to be expected!

In 1994, the golden sphere was cast in a durable material, gilded bronze, and placed at another location in downtown Zagreb, where it stands today. In this position, Kožarić’s original challenge is not so present. Now it is more a street ornament and not the free sun that fell spontaneously. The passers-by painted, wrote, and drew graffiti on it, left love messages, pasted stickers, and once even covered it with garbage. That is why someone then wrote: Attention! This is not bulky waste. Don’t touch! and kindly warned the workers of cleaning authority not to remove Kožarić’s work by mistake.

Since then, it has been painted several times, other artistic interventions have taken place around it, and in 2004, it became part of the solar system in an installation created by another artist. In 2016, it was covered with black cloth. This intervention was a response to the growing fascism in the society.

Kožarić thought that such interaction spreads positive energy, optimism, and faith in art. He liked to provoke a reaction from the audience, to communicate with them. His work preserves the idea of openness to process, incompleteness, and continuity. He developed a non-authoritarian relationship with his colleagues and viewers.

His other urban interventions were brave projects, hugely visionary, and really exciting in terms of how to approach public space. He explored the potential of altering public space by inserting objects into it. Several proposals, like Call It as You Like, a gigantic sculpture that appears to trample across a busy Zagreb intersection, were never realized. He imagined a sculpture that would be about 30 m high and the tram rails, as well as the road traffic, would pass between it. If realized, it would certainly be the most interesting monument in Zagreb. His ideas for urban interventions seemed impossible in the context of that time and space, and later as well.

Kožarić’s greatest desire was to reach the sun and bring it into our lives. By “grounding” the sun in Zagreb’s Lower Town, Ivan Kožarić succeeded in bringing light and warmth to the city center. Grounded Sun has thus become a legendary sculpture.