Angel with Attitude: Grumpy Angel from the Hyde Collection 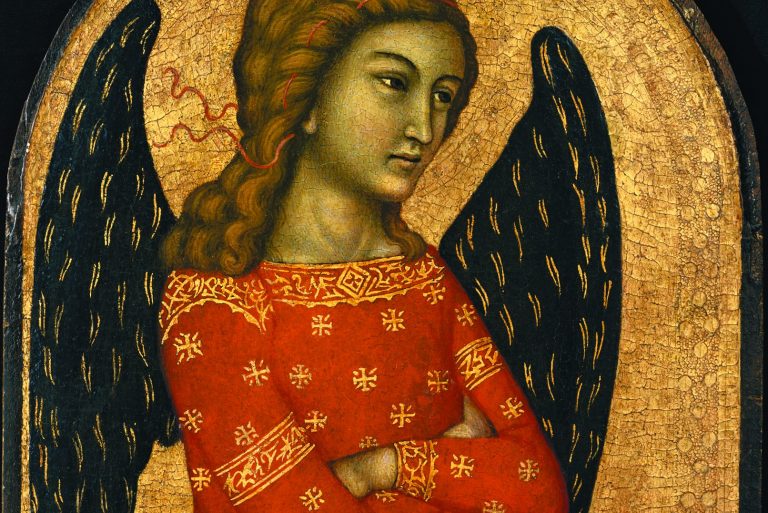 Angel is a painting by Niccolò di Ser Sozzo, c. 1350, owned by The Hyde Collection in Glens Falls, NY. This is an unusual depiction of an angel with her* arms crossed. She’s not the serene and heavenly figure you would expect; instead, she seems strangely displeased and irritated.

*Or maybe “his”. Angels in art history are notoriously androgynous.

This angel and her air of grumpiness caught my attention during a visit to The Hyde Collection. I wanted to learn more about the figure that museum personnel fondly call “Angel with Attitude.” Jonathan Canning, the museum’s Director of Curatorial Affairs and Programming and a medieval art specialist, was kind enough to email me with more information about this intriguing painting.

I suspected that The Hyde Collection’s Angel once belonged to a larger work, since standalone angel paintings aren’t common in medieval and early-Renaissance art. I figured that its original context would explain the strange pose.

Mr. Canning confirmed my hunch, telling me that the cross-armed angel likely started her days as the pinnacle of a now-lost altarpiece. However, he also pointed out that this would mean she originally gazed down upon a figure of Christ. It’s impossible to imagine that she would do so with the bad attitude she now seems to display. Canning says that this paradox is what inspired him to do more research into the painting.

Based on that research, Canning believes that the angel’s posture, far from being grumpy or unimpressed, originally expressed the far more appropriate emotion of reverence. He points to an example in an altarpiece by Pietro Lorenzetti (see above), which shows the Virgin and Child with two cross-armed angels above them.

In a complete altarpiece, these angels give off a different attitude despite a similar posture. Imagining the Hyde Collection Angel as part of something like Lorenzetti’s altarpiece, I can believe that her pose once appeared reverent. It’s amazing how context can change everything. Lorenzetti’s altarpiece is the only other example Canning has yet found of medieval or early Renaissance angels in this pose, though he says a related posture with arms bent one on top of the other was more common.

The Hyde Collection’s Angel is attributed to Sienese (Italian) painter and manuscript illuminator Niccolò di Ser Sozzo (active 1334-1363). Ser Sozzo is ghostly in the historical record. We have other works by him but know few personal details except that he was influenced by Simone Martini and the aforementioned Pietro Lorenzetti. Lorenzetti (active 1280-1348) was also from Siena and worked around the same time as Ser Sozzo. Mr. Canning thinks that Ser Sozzo got the idea for his angel’s pose from Lorenzetti, but he also believes that Lorenzetti got it from somewhere else – Duccio’s great Maestà of 1308-1311.

The Maestà was Siena Cathedral‘s massive altarpiece, so locals Lorenzetti and Ser Sozzo would undoubtedly have been familiar with it. Canning theorizes that Duccio invented the cross-armed angel pose and used it in the Maestà, and Lorenzetti and Ser Sozzo adopted it from there. If so, they were part of a long and noble tradition of artists paying homage to this spectacular altarpiece. Unfortunately, some panels from the Maestà have since gone missing, including any that might have proved that Duccio painted cross-armed angels. But what a great story for a little painting with a big attitude!

Thank you so much to Jonathan Canning for taking the time to write me a nice, long email about the Angel. An equally big thank you to the Hyde Collection staffer who saw my earlier post and put me in touch with Mr. Canning.