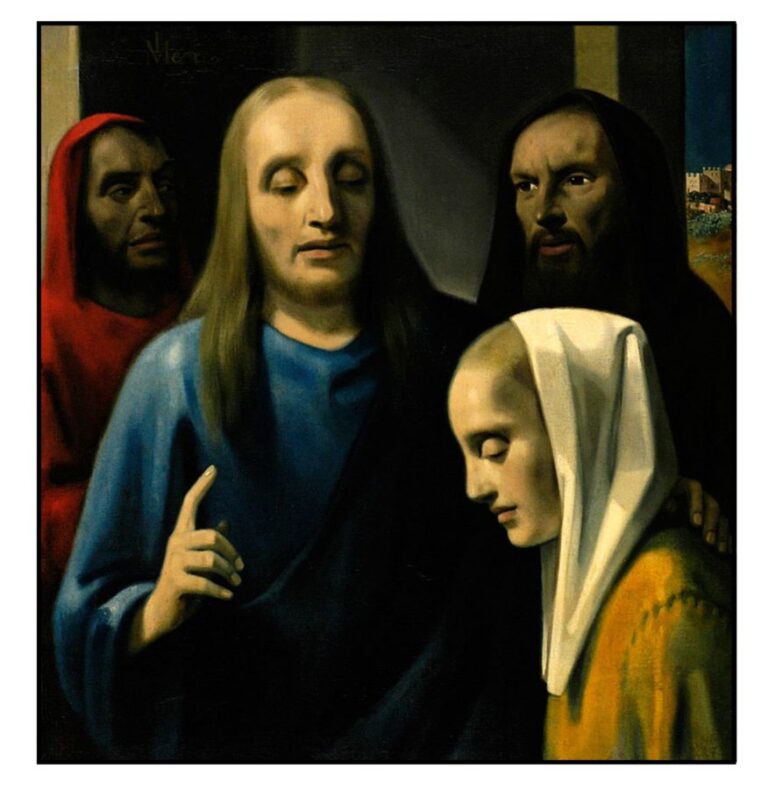 Who wouldn’t love to discover an unknown original painting by Johannes Vermeer? It must be a blissful moment to find an untouched and unspoiled work of art by the brush of a master. A work that nobody has seen before! When in 1937 Abraham Bredius, an authority in the art world, claimed he had found new and untypical works by Johannes Vermeer, everybody believed him. What a surprise it must have been, when ten years later a mediocre Dutch painter Han van Meegeren admitted that he was the author of these Vermeers.

Abraham Bredius can be justified in his mistake. When he looked at the fakes, he saw the style and subjects similar to this painting. It is one of the earliest Vermeer’s works which depicts a biblical scene instead of the quiet interiors and anonymous females which would follow later. Scholars suspected that Vermeer had been to Italy and was inspired by Caravaggio. His influence is seen here in the light and shadow contrasts and the handling of colour.

Look carefully at the following paintings. Are you able to outsmart Abraham Bredius and discern that they are not Vermeer?

Han van Meegeren had to admit his forgery because in 1945 he was accused of collaborating with the Germans as he had exchanged his fakes with Hermann Goering for 200 original Dutch paintings. Therefore, Meegeren could claim that he was a national hero who saved Dutch heritage, rather than a collaborator. This way Meegeren saved his life and had to spend only a year in jail for forgery.

It took Van Meegeren some time to figure out how to make a new painting look old. He would mix his pigments with a synthetic resin instead of oil, which would facilitate the hardening of paint, a process that usually takes 50 years. Subsequently, he would bake the canvas to make it even harder. Moreover, he explained any inadequacies in his technique by the fact that these paintings were early Vermeers so before the master had reached the peak of popularity.

In order to prove his innocence, Van Meegeren had to paint yet another ‘Vermeer’ in front of the judges and the police during the trial. He showed them his technique and the materials, and once again people believed him.