Painting of the Week – In the Studio by William Merritt Chase 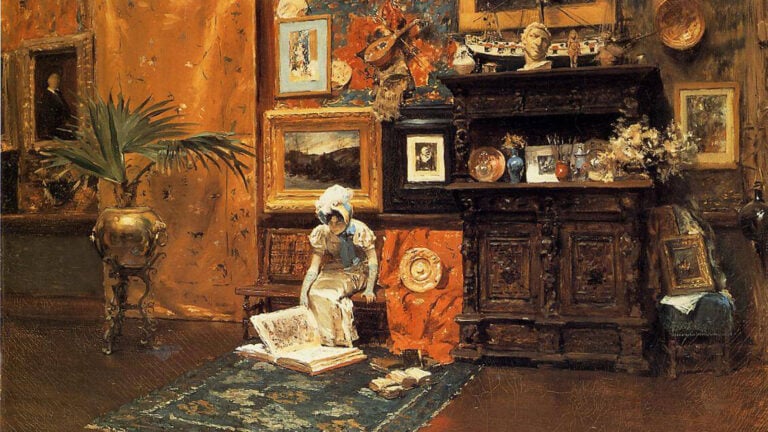 This painting shows part of Chase’s large space inside the Tenth Street Studio in Greenwich Village, New York. Designed by Richard Morris Hunt and completed in 1857, this was the first building in America specifically meant to house artists’ studios. Many Chase moved there in 1878. The Tenth Street Studio was very significant to American art history because of all the important artists who had studios there such as Chase, Frederick Edwin Church, and Winslow Homer.

Chase’s studio was very elaborate. It was one of the largest studios in the building, and he furnished it with his collections of art, furniture, and decorative objects from all over the world. He wanted his studio to be a meeting place to paint, teach, socialize, and study his collections. He sometimes hosted parties and theatrical performances in the space as well. Chase’s eclectic studio was a big source of public fascination in his time. He hosted open houses on Saturdays when some people got to come in and see it for themselves.

In the Studio is just one of many paintings Chase made of his space in the Tenth Street Studio. Others show slightly different views of the studio, so different decor is on display. The woman in this painting was likely one of his models or students. William Merritt Chase was a celebrated art teacher, and he trained scores of men and women during his career. Many of them spent time in the studio painting or studying his collections. Chase painted in a fairly academic style, but some of his pupils went on to paint very differently. Would you be surprised to know that modernists Georgia O’Keefe and Marsden Hartley were two of his students?

In 1896, Chase closed his studio and auctioned off all the contents. Sadly, the Tenth Street Studio building doesn’t exist anymore, either. It’s fortunate, therefore, that Chase made so many paintings of this fantastic environment so we can still enjoy it.