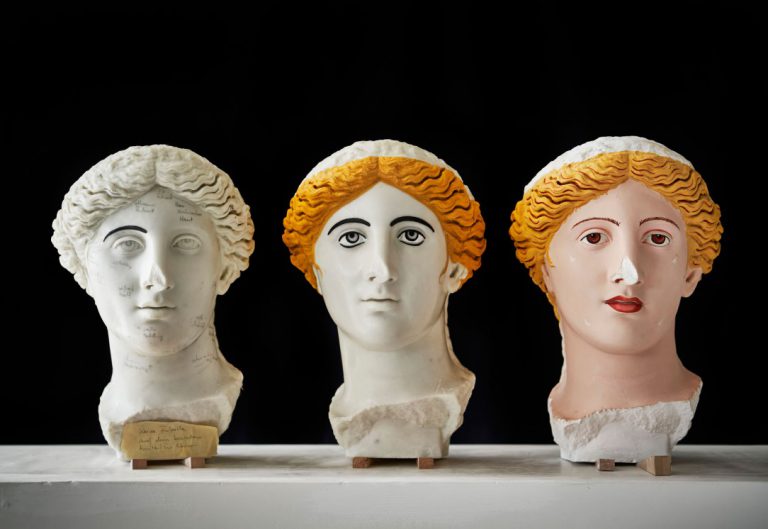 We admire the beauty and plasticity of ancient sculptures, how harmoniously they fit into the surrounding landscape. But we rarely ask ourselves the question of whether they were presented in this form to the people of ancient world. Warning: this may come as a shock. Ancient sculptures weren’t all white – they had colors!

History of the Myth

The theme largely originated during the Renaissance, when large collections of the dug up statues were formed. Artists such as Michelangelo fell in love with the realistic figures and pristine white surface of the ancient sculptures. So when Renaissance artists began to imitate them, they left their work unpainted. And this style was taken up by the later generations of sculptors.

White marble has become the norm. Johann Joachim Winkelmann, who is sometimes referred to as the father of art history, wrote:

A beautiful body will be all the more beautiful the whiter it is.

At first, the white color of antiquity was mostly a character of art criticism. But the further it progressed, the more this was an ideological setting also impacted by beliefs in white supremacy, visible in an 1899 poem by Rudyard Kipling, The White Man’s Burden.

Abandoning the idea of perfect white marble seemed like a complete disaster. After all, if the statue is painted, this is barbarism and a farce- not profound antiquity.

So everyone tried their best to ignore the evidence of marble staining. And there were many of them!

Pompeii As a House of Evidence

Excavations of Vesuvian cities (Pompeii, Herculaneum, Stabiae) in the 18th century gave art historians a lot to think about since it brought an insane abundance of polychromy. On the almost perfectly preserved frescoes we can clearly see featured colorized statues. The clearly sculpted heads in the garden are brightly painted.

On this Roman fresco the artist paints a picture from the painted statue, or, according to another version, paints a sculpture based on the model she sees on the painting. Both these versions clearly state the painted origin.

Venus Lovatelli is another colorful example of an ancient sculpture from Pompeii. It is clearly seen that the Goddess was painted. And Venus was made from Parian marble – one of the most expensive and prestigious materials. If you can paint over that, how can you not paint over other ones?

No, Pompeii Is Not the Only Example

Alexander Sarcophagus is another clear example of a polychrome marble from the Hellenistic period. At the bas-relief where Alexander fights the Persians at the Battle of Issus, there are obvious traces of active painting.

And of course, we have some cases from the literature for you!

Roman author Pliny the Elder was a very important figure, without whom we would not know a lot of things about the techniques of ancient artists. He mentions colors in his encyclopedic work The Natural History.

When asked which of his works in marble he was most pleased with, Praxiteles replied that with those to which Nikias had put his hand, because he attached such importance to his coloring.

Some more evidence comes from the Greek tragedy play Hypsipyle.

Take a look! Upward with your gaze, pursue the painted outlines of the statues on the pediment.

And on this Ring Stoneca we can see that artist clearly paints the sculptural portrait.

And let us not forget that Greek art – both monumental and plastic – was strongly influenced by Egypt. In Egyptian art, unpainted statues are quite rare. Their colors are so well preserved because of the climate peculiarities.

The Augustus of Prima Porta statue was discovered in 1863. By the words of archaeologists who found it, many remains of paint have been preserved. Now they are almost gone after the last purge in 1999. It is unclear if the emperor lost his color by accident, over-cleaning, or if it was deliberately removed. But one way or another, the same thing happened with many famous monuments. The approach of wiping off the excess plaque to restore the perfect whiteness existed until the beginning of the 20th century.

It is very important to point out that this is an exemplary statue. If this is how the statue of the emperor is made, then this is the way the statues are supposed to look.

Wait… But What Happened to the Colors?

There are many reasons that resulted in the myth of white marble. The most important are natural degradation (light, climate), and purification in museums. Much of museum work consisted of cleaning: it was clear to everyone that the statue must be white. If the statue was not white, then it needed to be washed. Until the 1960s, the statues were scrubbed with a stiff brush and the busts were soaked in water. Some of the busts even show file and rasp marks. Unfortunately, this was a common practice in most Western museums.

Now we have many more opportunities to study ancient sculptures. Scientists can now extract and examine tiny paint samples to determine the original pigments used. They also use ultraviolet and infra-red lightning to expose paintings that would otherwise be invisible.

The most famous initiative is the Gods in Color exhibition, organized by archaeologist Vinzenz Brinkmann in 2003. The exhibition moved through many museums around the world under different names and presented reconstructions that surprised and shocked the general public.

The presented reconstructions should be viewed as part of an ongoing experiment. Scientists are forced to make a number of valid assumptions.
It is precisely established which pigments were used in antiquity, but only in rare cases is it possible to restore all the pigments that were used to paint a certain statue.

Paint could make marble look human or godlike, and create emotion and drama. It brought stories and myths to life. Seeing colors on ancient sculptures can get us a little closer to understanding what the ancient world might have looked like.

Editor’s note: We highly encourage you to visit an exhibition Chroma: Ancient Sculpture in Color at The Metropolitan Museum of Art in New York. The show was organized in collaboration with Prof. Vinzenz Brinkmann and Dr. Ulrike Koch-Brinkmann and attempts to “re-discover” the colors of ancient sculptures from The Met’s world-class antiquity collection with the use of 3D imaging and augmented reality.