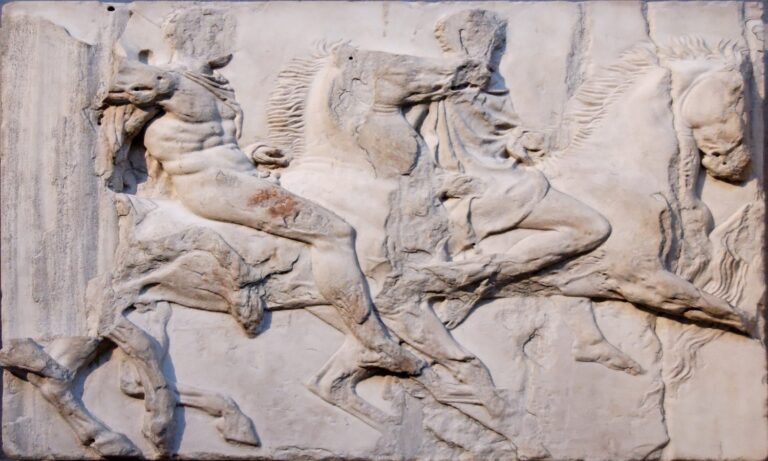 There are four general Ancient Greek stylistic periods. Different, note-worthy styles, influences from invading cultures and their lasting effects on the art of Ancient Greece characterize each period.

*Below is a generalization of the major Ancient Greek stylistic periods.*

The Geometric period of Ancient Greece began in the early 10th century BC through to the late 8th century BC. It is characterized by geometric patterns, such as the fret or key as seen below on this krater. The Ancient Greeks wanted to focus on their epic historical past and included imagery from poems, such as the Illiad and the Odyssey.   This particular piece was used as a grave marker; the soldiers and chariots on the piece may indicate a connection the deceased had to the military or, likewise, to the deceased’s family heritage. Monumental grave markers such as this one were first introduced in the Geometirc period.

The Hellenistic period ranges from the late 4th century BCE to the mid 1st century, with the death of Alexander the Great in 323 BC generally marking the beginning. Diversity in the array of and subject matter of art characterized this period. While the Hellenistic artists took from the centuries before them, they also made great strides of their own.