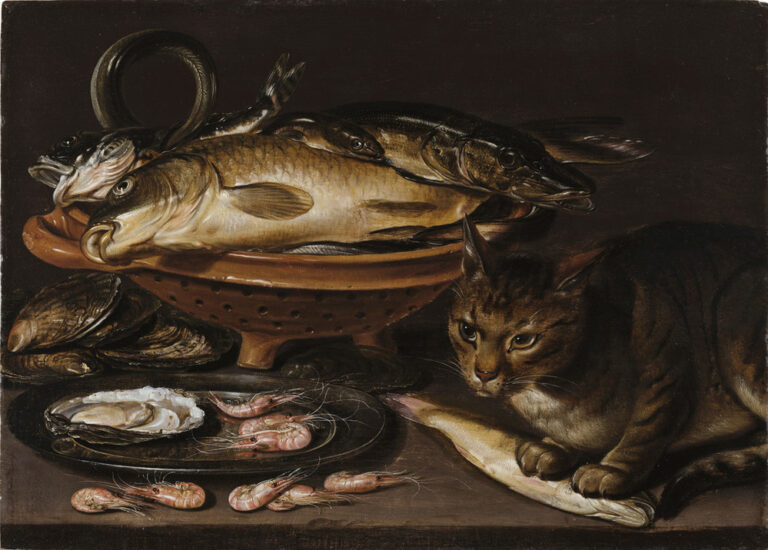 Clara Peeters, Still Life of Fish and Cat, after 1620. Gift of Wallace and Wilhelmina Holladay, National Museum of Women in the Arts, Washington, DC, USA,

In many cultures, Christmas Eve dinner does not include any meat or alcohol because one should keep a vigil fasting and expecting the feastings of Christmas Day. So in anticipation of a lot of food that many of you will experience tomorrow (me included!), let’s cherish views of some simple fish paintings:

In 1914, Braque enlisted with the French Army, but in 1915, he was severely injured in his head and suffered temporary blindness. Treatment required trepanation and, after the operation, Braque needed a long period of convalescence. After 1916, when he returned to painting, he began developing a new style characterized by brilliant color, textured surfaces, and the reappearance of the human figure. When he painted still lifes, he mostly studied textures and structures of various objects.

This drawing portrays a famous ancient Latin proverb that relates to how the powerful consistently prey on the weak in this cruel world. In the prints that followed this work, a Flemish inscription is added below the man gesturing to his son: “Look son, I have long known that the big fish eat the small.”

The Archangel Raphael brings little Tobias to Mother Mary and Baby Jesus. The boy holds a fish with which he later will cure his father’s blindness and which will give this painting, commissioned by Geronimo del Doce for the Chapel of Saint Rosalie at the Monastery of San Domenico in Naples, a customary name. On the right, we see Saint Jerome who is dressed as a Cardinal. He reads the Bible, the Vulgate, which he translated into Latin.

This print was executed during the first years of the Secession, yet it already documents Klimt‘s fascination with aqueous creatures and the world of women whose hair creates sinuous lines which become one with the water currents.

Objects like a glass with the four-leaf clover, a Chinese vase, or a folded sheet of paper were characteristic of De Pisis’ paintings. In this work, however, apart from his favorite objects, we see fish, which references Giorgio de Chirico’s painting The Sacred Fish.

Have a wonderful Christmas Eve, whether you eat fish or not!