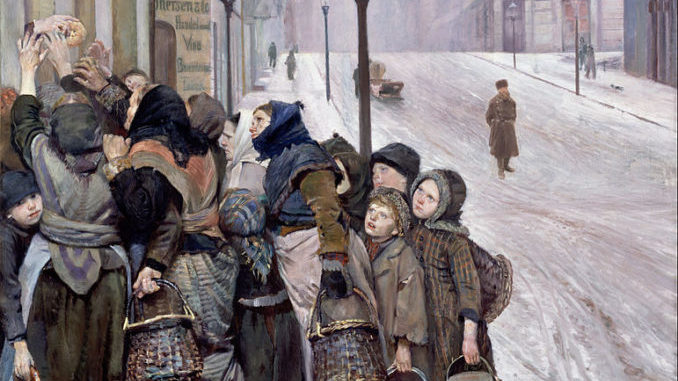 As the postman brings you cheery season’s greetings from your nearest and dearest, let me guess what the images are on the front of your Christmas cards. Chubby robins? Jolly Santas? Snowy picturesque villages? And of course, the obligatory Nativities.

But this year let’s take a look at some rather more unusual winter art. They may not make it onto the front of a Christmas card, but if you’re feeling weary of the glitter and forced bonhomie, then this article is definitely for you!

Number 1 in my top ten is this gnarled wonder by Giuseppe Arcimboldo. This Italian painter is best known for his magical portraits composed entirely of fruits, vegetables and flowers. His Winter portrait with stump-headed figure, twisted roots and fungal lips is the stuff of nightmares. Is this whimsy, the product of a dis-ordered mind or a canny salesman catering to the tastes of the time? Who knows, but when you’ve seen one Arcimboldo you’ll never forget it.

The Polar Sea by Caspar David Friedrich shows a ship slowly being crushed by jagged chunks of rock and sea ice. This inhospitable scene is devoid of human life, except for that tiny, broken vessel. The ice takes centre stage, monstrous in its power and destructive force. Perhaps a metaphor for global catastrophe that speaks to us today?

In a similarly bleak scene by Russian Ivan Shishkin, we see a lone pine, bending under its burden of snowfall. All around it, we see endless winter in sombre shades. Not even the cold moon can cast light down into the deep, dark gorge beneath the tree. The melancholy in this painting is palpable – this really is the Wild North.

I wasn’t sure whether to include this one. I mean it does occur on Christmas cards and most people have seen it. But I want to take another look at Hunters in the Snow. At first glance a rather romantic wintery landscape perhaps? A busy Medieval scene of rural life, just look at those skaters and the gorgeous snowy peaks. But then look at the hunters – they are exhausted, their dogs are skinny and morose. In fact at this point in history, the population was in the deadly grip of a mini ice age. Snowfalls were heavy, advancing glaciers destroyed pastures and crops failed. A grim era in which many of the painting’s inhabitants would have died. Not really very “Christmassy.”

Fast forward from the rural poor to the urban poor of 19th century Europe where we see a series of paintings from artists sometimes dubbed ‘The Miserabilistes.’ Confronting the plight of the urban poor head-on, these paintings were meant to shock the well-heeled middle classes into action. The Weary by Jules Adler shows working people heading to their meagre homes on a cold, damp winter evening.

Thought to have been inspired by a scene John Everett Millais actually witnessed, Blow, Blow Thou Winter Wind is a heart-breaking scene set in a bleak landscape. A shivering mother attempts to shelter and feed her infant as the father walks away into the howling gale. Is he leaving or just checking the road ahead? We don’t know. But the dog crying out into the sky seems to indicate that this is not going to end well.

Louis Sparre was a Swedish painter, ceramicist and designer. First Snow is a sombre interior scene. In a spartan hovel a mother and child sit in near darkness as the first snow of the winter begins to fall. There is no delighted excitement here. Snow means cold, hardship and a long winter ahead.

For the poor winter was not a time for snuggling by the fire and eating Christmas treats. It was possibly the worst time of year. Christian Krohg explored this expertly in his painting of Karl Johan Street in Oslo. Struggle for Existence is our featured image at the start of this article, and shows a deserted street in the depths of winter. Crowded into the bottom left hand corner our hearts are broken by a tightly packed crowd of poor women and children, as they reach for stale old bread, being given away by the baker. The ragged crowd look longingly up at the bread roll being held aloft by a disembodied hand behind the pillar. Only one small boy looks out at us with dark weary eyes, cap pulled down to his ears to keep out the cold, clutching his bread in his pale, thin hand.

Hans Baluschek was an artist who returned again and again to wintery scenes as a symbol of the lack of compassion within humanity. December is a desolate field whose barbed wire fence is festooned with dead soldiers. Snowed In shows a grey, murky sky hanging ominously over a group of emaciated soldiers, almost hidden under a freezing layer of snow, their cannon lying useless and idle beside them. Deep Snow shows a mucky, smog-filled yellow sky with snowfall failing to cover the ugliness of an industrial landscape. The image shown above is simply entitled Cold. Grim faced workers cross a bridge over a frozen canal as chimneys belch filthy smoke into a leaden sky.

But I leave you with something slightly brighter. If I asked you to paint a winter picture, what color palette would you reach for? White, grey, shadow blue? Not Wassily Kandinsky, whose Winter Landscape bursts with eye-popping hues of pink, yellow, green and blue. Kandinsky developed a theory of color entirely unlike other artists. Was this artist a synesthete? Almost certainly yes, as this landscape certainly seems to hum with sound and feeling as well as color.

I hope your Holidays are as festive and bright as a Kandinsky’s art, but remember to share a thought, and a little more, for those whose winter may not be as happy…