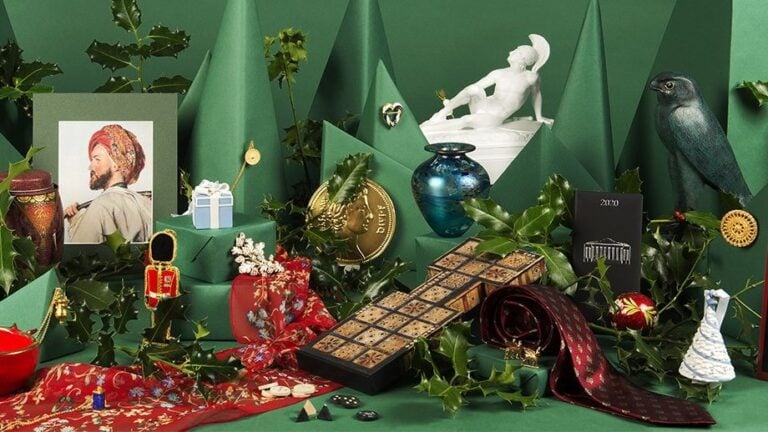 Halloween has passed and the Christmas season has officially started. With it the longer nights, warm glow of lights and candles, and the headache of coming up with gifts for all our loved ones. It's no easy task to think of something original every year. So, we decided to help inspire you. Here are the best gift ideas from the top 10 museums (as listed by National Geographic).

The Institution is so big it has multiple shop. While an in-person visit to the Smitosonian is always recommended, it is not required to visit the shops: all of them can be explored online.

My personal favorite Christmas gift idea is this musical ring holder. As described in the shop it is: “Utterly romantic, this enchanting evocation of Fabergé eggs is handmade from a genuine goose egg. Opulently jeweled with faux gems and Czech crystals, this Limited Edition Musical Ring Holder Egg plays Pachelbel's Canon in D as the ring holder turns.”

It packs it all, beautiful on the outside, functional, made of natural materials and plays music. Of course, it should come with a ring. Keep that in mind!

Probably the best-known museum in the world, and certainly the largest. Its name is almost a synonym of the word 'museum'. Housed in the former palace of the Kings of France, the Louvre Museum presents vast and rich collections: in all, more than 38,000 works of the ancient civilizations around the Mediterranean, the arts of Islam, and Western art from the Middle Ages to 1848.

The museum has 14.5 km of halls and corridors, 2,410 windows, and 3,000 locks. Apparently, to visit the entire museum and see every piece would take you 3 days and 2 nights non-stop, if you only spend 10 seconds on each piece.

If you survived this, then your next step would be to go to the shop, so we’ll skip the exhausting 14.5 km and jump straight there. What caught my eye was the archer ring, again not only is it beautiful, it’s also functional, protecting your thumb as you go about your daily dose of archery. Don't be misled; it’s not only for women.

Surprisingly enough, the Acropolis Museum is relatively new, founded in 2003 and opened to the public in 2009. The museum was built to house every artifact found on the Acropolis Hill and on the surrounding slopes, from the Greek Bronze Age to Roman and Byzantine Greece. It also lies over the ruins of a part of Roman and early Byzantine Athens.

While the museum building is very modern, they didn’t get round to setting up an online shop yet. They do however offer a glimpse of the on-site shops' offer. I was instantly attracted to the 10th anniversary cranes collection and specifically, the silk stole (here you can find out how stole, scarf and shawl are very, very different).

The Hermitage is considered to have been founded in 1764 when Empress Catherine the Great acquired an impressive collection of works from the Berlin merchant Johann Ernst Gotzkowsky. The collection of the State Hermitage includes over 3 million works of art and world culture artifacts. It contains paintings, graphic works, sculptures, works of applied art, archaeological artifacts and numismatic objects. It is the second-largest museum in the world, after the Louvre. The Hermitage does own the largest collection of paintings in the world.

The museum’s online shop design is not the most modern, but the items on offer are fascinating nonetheless. I will make an exception here and select two Christmas gifts, mostly because the one I like is beyond the financial means of most of us.

The shape of this small shot glass, a lafitnik, is reminiscent of the wine glasses originally intended for Château Lafite dry red wine, a popular Bordeaux usually served at the beginning of dinner. The Russian Imperial Coat-of-Arms was a common characteristic of 18th-century palace tableware. At the beginning of the 20th century, similar vodka glasses were quite popular in Russia.

I typically associate St. Petersburg with Fabergé. The next obvious association are famous bejeweled eggs. Since there already is an egg in our selection, I picked a beautiful carved stone bouquet.

The British Museum was founded in 1753 and opened its doors in 1759. It was the first national museum to cover all fields of human knowledge, open to visitors from across the world. The British Museum has about 8 million objects in its collection, covering 2 million years of history.

The museum has, of course, numerous shops, dedicated to various parts of their extensive collection and a fantastic online shop. Again I could not help myself and picked two Christmas gifts: skeleton head Christmas tree decoration and a pair of very special egg cups. Both ironic in a very British way.

Add an alternative look to your Christmas tree with this bejeweled skeleton head decoration. Finished in bright colors, this decoration will add bright and sparkly feel to your tree!

A pair of egg cups that caters for a range of tastes. They are blue and white transferware decorated with Brexit-inspired motifs, also seen on the Weeping Willow plate. Hard Brexit has an oak motif and a star either shooting off or crashing down to earth. Soft Brexit features the gathering storm clouds and two birds circling each other.

The Museo del Prado opened to the public on 19 November 1819 as a Royal Museum of Painting and Sculpture. It is widely considered to have one of the world's finest collections of European art, dating from the 12th century to the early 20th century, based on the former Spanish Royal Collection, and the single best collection of Spanish art.

We’ll go for something practical this time – a foldable bag. It’s an easy and inexpensive Christmas gift, that everyone will appreciate. In the end, we can all use one more bag to save the planet. Especially is it’s pretty! This one reproduces on both sides a detail from the work by Mariano Fortuny Malvas reales.

The Metropolitan Museum of Art, New York, US

When The Met was founded in 1870, it owned not a single work of art. Through the efforts of generations of curators, researchers, and collectors, its collection has grown to represent more than 5,000 years of art from across the globe—from the first cities of the ancient world to the works of our time.

Their online shop is beautiful and perfectly organized, with items inspired by the museum’s vast collection. We all know that the more Christmas tree decorations the merrier, so here comes a nice set to make us merry.

The Vatican Museums house and display the works from the immense collection amassed by Popes throughout the centuries. Including several of the most renowned Roman sculptures and most important masterpieces of Renaissance art in the world. The museums contain roughly 70,000 works, of which 20,000 are on display. They currently employ 640 people who work in 40 different administrative, scholarly, and restoration departments. There are 54 galleries, or sale, in total with the Sistine Chapel, being the very last sala in the Museum.

There is a good selection of items in their online shop, even if it's not the prettiest of shops. I think it’s time for a bit more personal gift, like a notebook.

The Uffizi is one of the first modern museums. The gallery had been open to visitors by request since the sixteenth century. In 1765 it was officially opened to the public, formally becoming a museum in 1865. After the ruling house of Medici died out, their art collections were gifted to the city of Florence under the famous Patto di famiglia negotiated by Anna Maria Luisa, the last Medici heiress.

Florentine museums all decided to pool their resources together and create one online shop.

A very special Christmas gift idea from their store caught my eye: a selection of Springa trainers decorated with the museum’s artwork.

The Rijksmuseum was founded in The Hague on 19 November 1798. It moved to Amsterdam in 1808, where it was first located in the Royal Palace and later in the Trippenhuis. The current main building, designed by Pierre Cuypers, first opened in 1885. On 13 April 2013, after a ten-year renovation, Queen Beatrix reopened the main building. The museum has on display 8,000 objects, from their total collection of 1 million objects from the years 1200–2000.

In the Rijksmuseum online shop, I found the second missing classic of Christmas gifts (apart from the scarf) – the socks!

And because we are in Christmas mood here is a bonus idea from our fantastic Daily Art team – 2020 calendars, with beautiful masterpieces and short stories about them. We ship worldwide! Check out our shop. From Black Friday to Cyber Monday you can get them 30% off!