Autumnal Still Lifes for a Tasty Welcome of Autumn 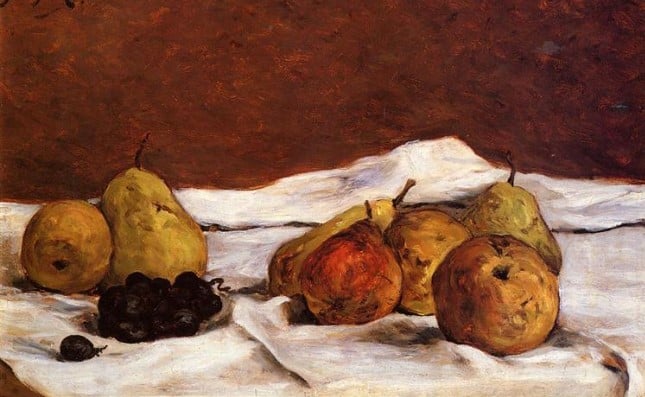 As the days slowly become darker and gloomier, and all the beautiful green flora is turning yellow and red, we would like to officially welcome autumn with a selection of the tastiest autumnal still lifes. This is an ode to the season abundant in fruit and veg!

Paolo Antonio Barbieri is probably the less famous sibling (is it because he specialized in still lifes?) of his older brother Guercino, whose luminous depictions of biblical scenes were hugely successful. Paolo instead loved painting nature, excelling predominantly in painting fish. His autumnal still life is especially mesmerizing.

A painter can say all he wants to with fruits or flowers, or even clouds. You know, I would like to be the Saint Francis of still life.

Although he is famous for Olympia or scenes portraying Parisian life, still lifes represent almost one-fifth of his oeuvre and were most welcome by everyone:

The most vociferous enemies of Edouard Manet’s talent grant him that he is good at painting inanimate objects.

Ribot loved painting still lifes and kitchen scenes, but because he worked as a decorator of gilt frames in a mirror factory in Paris, he had to paint at night. He painted this autumnal still life following Gustave Courbet’s principles of Realism: to render nature as it was, far from any idealization ⁠— normally, the bulky pumpkin would be polished and smooth, like in the cover painting by Brueghel.

When Gustave Courbet had to serve 6 months in the Sainte-Pélagie prison after the Paris Commune, his sisters often brought him fruit and flowers, which he began to use as subjects for painting.

Contrary to Courbet, Gauguin railed against the prevailing Realist aesthetic (this one is pretty realistic because it’s an early work). Once, when discussing with younger followers the transposition of an object to canvas, Gauguin lost his temper and pointed to a plate of apples, shouting: “For goodness’ sake, that’s not an apple, it’s a circle!” He produced circa one hundred paintings of circles, which stand for one-sixth of his total oeuvre.

Around 1913, the Fauve spontaneity of Matisse‘s previous compositions gave way to a more formal Cubism-inspired discipline, so visible in his still lifes.

Only a talented painter when painting a still life, really captures the silent and still life of things created by nature or by men. A jug, so poorly-looking and insignificant that it goes unnoticed when put on a farmer’s table, in a good painting can become a fascinating object full of nobility.

De Chirico once wrote in regards to painting still lifes.