We’ve all heard of the personalities who made history during quarantine: William Shakespeare wrote King Lear while in quarantine, Isaac Newton developed calculus and his theory of gravity while in quarantine, Giovanni Boccaccio wrote The Decameron while in quarantine, and so on. While we may not get closer to time travel or teleportation, various creatives have reimagined iconic images, ranging from logos to album covers, that attest to these times. Among them there is a never-ending series of the empty paintings of quarantine.

One project, The Art of Quarantine by Jeff Roy and Paul Drake, has applied the rules of social distancing to famous paintings. The result is a series of empty paintings of quarantine.

Wanderer above the Sea of Fog

German painter Caspar David Friedrich’s 1818 masterpiece of Romanticism is missing its wanderer. Wanderer above the Sea of Fog is one of the most famous examples of Rückenfigur, a compositional device in which a figure is seen from behind. Some believe that the figure is a self-portrait of a young Friedrich, standing in contemplation and introspection while gazing out into the fog and unknown. The painting, in the Kunsthalle Hamburg, is a demonstration of the sheer complexity and sublimity of nature. Also a mystical quality surrounds the vastness of mountains and mist depicted.

Another piece used for the empty paintings of quarantine series is The Scream. Norwegian artist Edvard Munch’s iconic 1893 work has lost its anguished character from the foreground as well as the two figures walking along the boardwalk. Later in life, Munch worked on paintings depicting sickness and death, centering around a period in 1918 when he was afflicted by the global flu pandemic. Unfortunately, the disease would claim the lives of other creative and intellectual contemporaries such as French poet Guillaume Apollinaire and fellow painter Gustav Klimt.

Austrian artist Gustav Klimt’s seminal piece representative of Art Nouveau is without its famous lovers. Influenced by the Byzantine mosaics of the Church of San Vitale in Ravenna after a 1903 trip to Italy, Klimt used gold leaf to accentuate the two figures embracing for a kiss. This was a high point of Klimt’s Golden Phase between 1899 and 1910. The painting can be found in the Belvedere, Vienna, captivating visitors with its stylized shapes and shimmering iconography.

American artist Edward Hopper’s iconic 1942 portrayal of a diner has its customers and the man behind the counter practicing self-quarantine. Possibly inspired by Ernest Hemingway’s short stories The Killers and A Clean, Well-Lighted Place (both set in diners), Hopper portrays a night-time scene at a diner in Greenwich Village, New York. The painting thematically focuses on alienation and isolation through its use of light and shadows. The painting was acquired by the Art Institute of Chicago soon after its completion.

American artist Grant Wood’s 1930 work has both figures quarantined inside the Carpenter Gothic house. The two figures shown are a father and daughter pair (often mistaken to be husband and wife) that was modeled by the artist’s dentist, Dr. Byron McKeeby, and his sister, Nan Wood Graham. Today, American Gothic is a part of the collection of the Art Institute of Chicago.

With restaurants and food establishments closed around the world, Dutch painter Vincent van Gogh’s 1888 depiction of a café interior is without its patrons. The painting pictures the Café de la Gare, 30 Place Lamartine in Arles, where Van Gogh spent most of his later life. Here, inspired by the light and environment of southern France, he painted some of his most famous works. Today, the painting is owned by the Yale University Art Gallery.

A Sunday Afternoon on the Island of La Grande Jatte

French painter Georges Seurat’s most famous work now shows an empty island. Executed in Seurat’s quintessential Pointillist style, the painting depicts middle-class Parisians of La Belle Époque, who are now practicing social distancing. Spending well over two years to complete the painting, A Sunday Afternoon on the Island of La Grande Jatte is prominently seen in pop culture, notably appearing in Ferris Bueller’s Day Off. Kept in the Seurat family after the artist’s death, the painting is now in the collection of the Art Institute of Chicago.

The Son of Man

Belgian artist René Magritte's 1964 depiction of a man in a bowler hat, with a face obscured with an apple, now has the man staying inside. The painting is speculated to be a self-portrait of Magritte, incorporating a bowler hat and a face covered by an object—key elements of Magritte’s works. The surrealistic nature of Magritte’s works is expressed through its evocation of mystery and the mundane.

You can view more at: theartofquarantine.com

A current student at The Wheatley School interested in the intersections of humanities, the arts, and technology.

If enjoyed empty paintings and you're interested in more Quarantine-related art, check out:

Art creates emotions and, generally, you either like a certain piece of art or you don’t. But despite that, what is valid for everything else is [...]

Wouldn’t it be nice to immerse yourself in a fairy tale: hike among the heroes, fight monsters, visit enchanted lands? It would be a nice break [...] 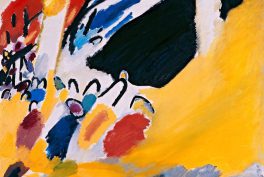 Synesthesia is a neurological condition in which a perception from one sense evokes sensation in another one. In the art world, there are works which [...]