The Window and the Pitchfork: The Story Behind Wood’s American Gothic 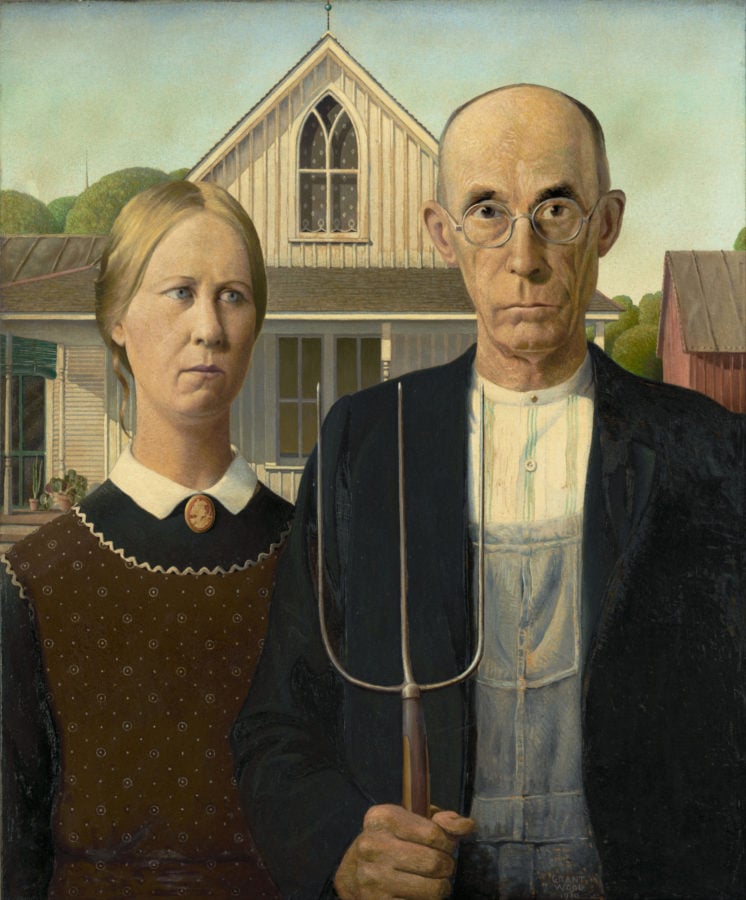 Under the blue sky of Iowa, a man and a woman stand solemnly in front of their house. They are farmers as suggested by their clothing and the pitchfork the man is holding. This is Wood's American Gothic, one of the most iconic artworks in American culture. Grant Wood (1891-1942) painted it in 1930. It is housed in the collections of the Art Institute in Chicago.

It is quite interesting to look at the story behind Wood's instantly recognizable American Gothic.

Grant Wood is one of the prominent figures of the American Regionalism movement. Along with Thomas Hart Benton and John Steuart Curry, he developed a realistic style of painting that became popular during the Great Depression (1929-1939). Throughout the hard times of the economic recession, the regionalists avoided modernism and abstraction. Instead they focused on a highly detailed style. Thematically they favored rural and everyday subjects that told a story, exemplifying the Midwestern way of life.

It all started with the house. Wood, born and bred in rural Iowa himself, spotted it in August 1930 while visiting the town of Eldon. Immediately, he made a sketch intrigued by the presence of Gothic windows in such a small house. The architectural style is Carpenter Gothic and was popular during the 1880s in the USA. It also inspired the name of the painting since Wood imagined the "American Gothic people", as he deemed them, as the inhabitants of this house. What amused him was the absurdity of the architecture since these types of windows are usually seen in huge medieval Gothic cathedrals made of stone.

As for the persons who posed for the painting, Wood persuaded his sister Nan to pose for the woman and the family dentist, Byron McKeeby, for the man, which they did separately. The painter composed the whole piece in his studio. He did this despite the fact that painting from life had been favored by artists since the late 19th century. However, Wood was looking at the past in his brushwork as well. The highly detailed style of the painting, as well as the austere frontal pose of the figures, comes from Flemish Renaissance art (16th century). He studied this style while he was traveling in Europe in the 1920s. The relationship between the man and the woman is still ambivalent. Many believe that it depicts a couple, others that the two of them are father and daughter. The painter himself was quite ambiguous on this point, which resulted in an amplified interest in and publicity for the painting.

The painting was a submission in the annual exhibition of American paintings at the Art Institute of Chicago in 1930. It won the bronze medal, a monetary prize, and was bought into the museum’s collection, making Wood famous. After this success followed vigorous debate over the painting. On the one hand there were several critics who believed that it represented a satirical view of small-town America. On the other, many Iowans took offence at the stereotypical way Wood had painted them. Also they took offence at the large age gap between the figures since they believed they were a couple. Nonetheless, during the Great Depression, a time where there was a demand for artworks that lifted and celebrated the American spirit, the meaning of the painting changed to represent hard working Midwestern Americans as Wood intended from the start.

To this day American Gothic has been parodied countless times. This proves that the painting is still fertile ground for social commentary on anything American and that the debate on American values it inspired in 1930 is still relevant today.

See also Grant Wood and his Wry Sense of Humor