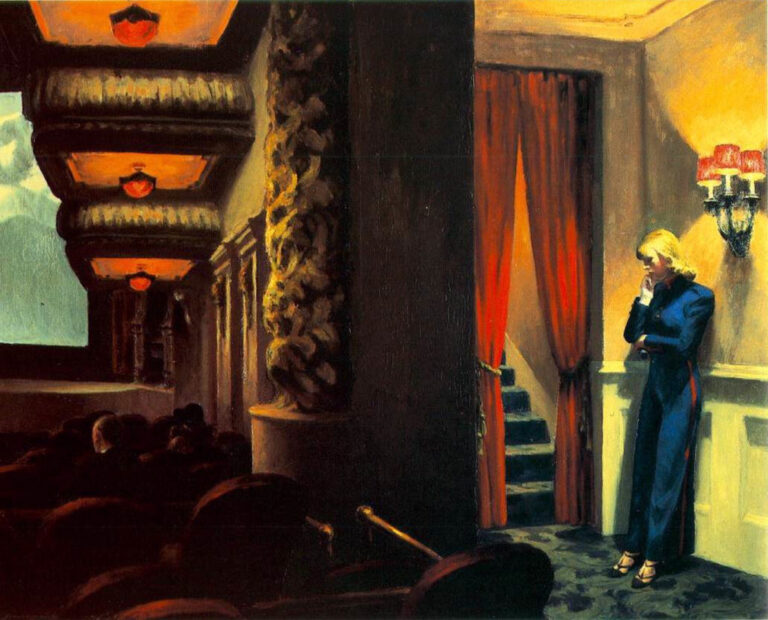 Edward Hopper was a prominent American realist painter and printmaker. He was famous for two types of paintings in particular: first, one focused on the common features of American life (gas stations, motels, restaurants, theaters, railroads, and street scenes) and its inhabitants; and the second, seascapes and rural landscapes. We all know Hopper’s most famous work: the Nighthawks. Today we are going to talk about something different though. Hopper was a lifelong devotee of cinema and theater, both of which became subjects for his paintings. Each form influenced his compositions. Below we present Hopper’s paintings presenting theaters and cinemas.

Two on the Aisle is a seemingly simple composition: three figures in an otherwise empty theater. It was Hopper’s first major painting of a theater scene, a theme to which he subsequently returned frequently. Typically for him as a master of solitude, instead of capturing the action on the stage or bustle of a crowd, Hopper chooses to focus on the quiet moment before the performance. The painting is replete with details that invite the viewer into the narrative, as if Hopper had removed a single frame from a reel of film. Hopper’s compositional structure places the viewer as an additional theater patron, succinctly noting his or her surroundings, and perhaps also quietly taking a seat.

Edward Hopper was a great observer of modern life. However, instead of painting bustling dance halls and frenetic burlesque theaters, Hopper chose instead to paint an empty movie theater. He witnessed an exciting period in cinema history: the introduction of electricity and sound, and then, the rise of the Hollywood motion picture. Movie theaters themselves were being transformed from dark halls to movie palaces that featured luxurious settings. The Sheridan Theater, which seated 2,000 guests, was one very close to his house.

Like most of the female figures in Hopper’s paintings, this one was based on his wife, Jo, who posed standing under a lamp in the hall of their apartment. Hopper drew his wife in various different poses for New York Movie and also precisely designed the auditorium decor, down to the pattern of the carpet. Again and again, he sketched the foyers, stairways, and auditoriums of his favorite movie houses, the Palace, Globe, Republic, and Strand.

The usherette is a 20th-century counterpart to the bored waitress in A Bar at the Folies-Bergeres of Edouard Manet. Similar to Manet, Hopper was genius in making the illusory world of the theater so enticing, so glamorous, and so completely empty.

Here we have a situation rather similar to that of Two on the Aisle: people are waiting for a concert to begin, an elegant lady seems to be closed to all outside stimulus. Hopper’s oeuvre demonstrates the uniqueness of his vision, making his images as relevant today as the day he created them. His art speaks not to one country or to one time, but to all who grapple with the trials of civilization as they occur in daily life.

Intermission is among the artist’s largest and most ambitious paintings. Hopper came up with the idea for it while he was watching a movie and his wife, Jo, arranged for him to work on the painting in an empty theater. However, Hopper decided to complete Intermission at his home and studio in New York City. A surviving preparatory sketch for the painting reveals that he considered including another figure in the third row.

In an interview he revealed, “There’s half another person in the picture”. The final composition depicts a solitary woman in a theater, sitting alone in the first row of a side aisle. Seemingly waiting for others to return from intermission, she appears lost in thought, staring off into the distance as she sits contently in a comfortable-looking dark green theater seat with her ankles crossed.

At age 83, Hopper painted Two Comedians, which he intended as a personal statement, sort of a farewell. As Jo later confirmed, the painting represented the two of them gracefully bowing out. Both were in their eighties and had been ill; Hopper would die less than two years later and Jo the following year. They are like the young lovers Pierrot and Pierrette from the commedia dell’arte. In death, it appears, Hopper preferred company, wanting Jo to stand by his side.

This article was written with an immense help of museum websites that provided us with insightful descriptions of Hopper’s works.