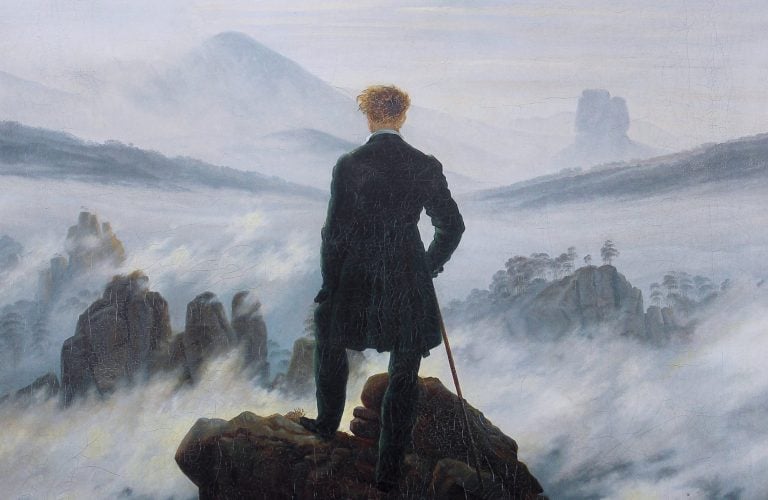 Caspar David Friedrich’s works changed the face of landscape painting with his intense and emotional focus on nature and he became a key member of Romanticism. His works are easily recognizable and often cited by popular culture. In such paintings, the artist’s mood and love for nature cannot go unnoticed. We have prepared 10 most famous works by Caspar David Friedrich.

For Caspar David Friedrich, nature was not just a backdrop to fill the space behind portraits, for him nature itself took center stage. He sought the spiritual through the contemplation of nature, extending the bounds of trees, mountains, hills, and crashing waves beyond just a beautiful view. They now had a significant spiritual meaning.

1. The Cross in the Mountains

This was one of Caspar David Friedrich’s earliest and most controversial paintings. He made the frame himself, and it is an important part of the masterpiece. The whole work was designed to serve as the centerpiece of an altar and it’s also known as the Tetschen Altar. It was the first time in art history when a Christian altarpiece presented only a pure landscape.

The cross, viewed obliquely from behind, is an insignificant element in the composition. More important are the dominant rays of the evening sun, which Friedrich said depicted the setting of the old, pre-Christian world. Furthermore, the mountain symbolizes an immovable faith, while the fir trees are an allegory of hope. Pure Romanticism!

2. The Wanderer Above the Sea of Fog

The Wanderer presents a metaphor for the unknown future. It is a great monument for human individuality. Some believe that the wanderer is a self-portrait of Friedrich. Although, he painted this scene in his studio, it was sketched at the place of inspiration, Elbsandsteingebirge, in Saxony and Bohemia.

With its striking white chalk cliffs, Rügen was – and still is – a popular North German tourist destination. The painting was executed during a brief period of hope – both in Friedrich’s personal life and in the political life of the German nation. In the summer of 1818, Friedrich was on his honeymoon: the woman in the red dress is almost certainly his bride, Caroline. Meanwhile, Friedrich himself is the figure in the middle. The man dressed in the old German costume of the student fraternities that formed in the wake of the Congress of Vienna represents the liberal nationalists who, at the time, were still basking in Frederick William III’s promise of constitutional and democratic reforms.

4. Moon Rising over the Sea

Clouds have come up and the round shape of the full moon is half hidden behind the banks of cloud at the horizon. This means that the moonlight does not fall evenly but seems to be breaking out of a gateway in the clouds, creating a magical play of light. Three people sit on rounded rocks near the shore, two sailing ships pursue a ghostly course across the water. These are the typical subjects in Friedrich’s works.

5. Woman at a Window

The young woman standing at the window is Caroline, the painter’s wife. She is looking out across the River Elbe to the other side. The bare interior of the studio seems lifeless and unlived in. In this work, Friedrich has adopted a favorite theme of Romanticism, where the framework of a window links proximity and distance and evokes a longing for the unknown.

This is the most radical composition of all of Friedrich’s works. He didn’t bother to create an illusion of depth – which had been a traditional aspect of landscape painting. The broad expanses of sea and sky emphasize the meager figure of the monk, standing before the vastness of nature and the presence of God.

In the foreground a crippled man has abandoned his crutches and sits against a rock with his hands raised in prayer before a crucifix. The rocks and evergreen trees may be interpreted as symbols of faith. Meanwhile, the visionary Gothic cathedral emerging from the mist evokes the promise of life after death.

A Walk at Dusk is among a small group of works Friedrich completed before suffering a debilitating stroke in 1835. The painting embodies both the melancholy he experienced during this period as well as the consolation he found in the Christian faith.

9. The Abbey in the Oakwood

A procession of monks, some of whom bear a coffin, heads toward the gate of a ruined Gothic church in the center of the painting. Only two candles light their way. A newly dug grave yawns out of the snow in the foreground, near which several crosses can be faintly discerned. The lower third of the picture lies in darkness – only the highest part of the ruins and the tips of the leafless oaks are lit by the setting sun. The waxing crescent moon appears in the sky.

The figures here have been identified as Friedrich and his friend and disciple August Heinrich. This is the third version of one of Friedrich’s most famous compositions, only the first of which was painted during Heinrich’s lifetime; Friedrich painted the first version in 1819 (now at Gemäldegalerie Alte Meister, Dresden), and the second soon after Heinrich’s death, finished around 1824 (now at Alte Nationalgalerie, Berlin).