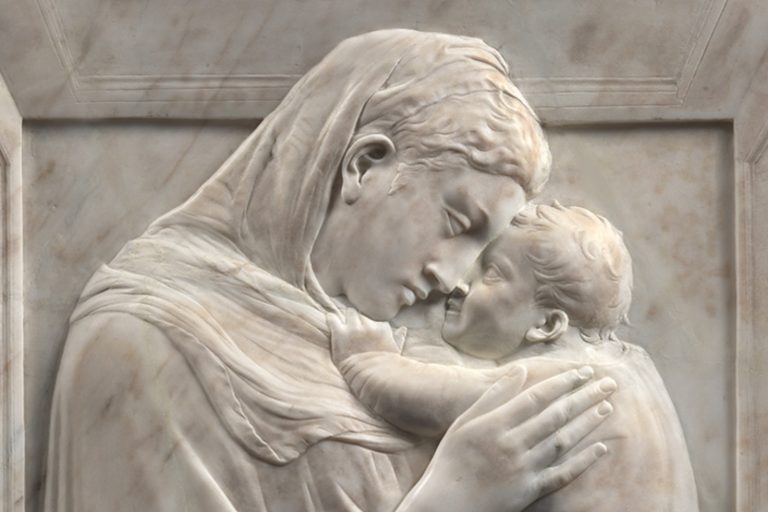 David Sculptures: Bumcheeks, Hats and Other Fetishes of Florentine Artists

If someone would ask a regular passerby about the artists of the Italian Renaissance, we would probably hear the names of Leonardo da Vinci and Michelangelo, maybe Raphael or Titian. Clearly, the fame of these High Renaissance masters put the generation before them in the shadows of the public memory. Hopefully, this will change a little thanks to a spectacular Donatello exhibition organized in the Bargello and Palazzo Strozzi in Florence, which will be installed later in Berlin and London. The show, marking the 600th anniversary of his birth gives proper spotlight to Donatello, the father of the Renaissance.

Donatello was born c. 1386 in Florence and died on December 13th, 1466, also in Florence. Just to spot where on the timeline are we – Leonardo da Vinci was born in 1452, and Michelangelo in 1475. Donatello had a long life and created a huge body of work which for the most part is still anchored to the sites for which they were made. Naming him the “father of Renaissance” is not an exaggeration.

It was Donatello who moved sculpture from medieval International Gothic influences back to the roots of the Ancient Greek and Roman ideals. Harmony, classical beauty, realism – these are the qualities that the art of Donatello brought and which were spread among the buzzing Tuscan artistic community of his times. Along with Filippo Brunelleschi, he was a trailblazer of rational perspective in art. He was the one that made the first large-scale sculptures since Roman times that were independent of architecture (e.g. Gattamelata in Padua). He was the inventor of non-finito in sculpture. He never stopped innovating and experimenting with the most diverse genres, destinations, materials, techniques, and formats. Thanks to the exhibition in Florence we can get to grips with Donatello’s importance and see it fully.

Donatello was truly omnipotent: he worked with stone, bronze, wood, clay, stucco, and wax. Although his best-known works were mostly statues in the round, he developed a new, very shallow, type of bas-relief for small works – a technique known as schiacciato. It created a far more-striking effect on atmospheric space than before. The sculptor no longer modeled his shapes in the usual way but instead seemed to “paint” them with his chisel. A perfect example is the relief of The Dead Christ Tended by Angels, probably made for the front of an altar with amazing dramatic angels in the background. Thanks to his innovations and bold stylistic method and skills, Donatello had a profound influence on other artists during his lifetime and after – sculptors and painters alike – from Masaccio and Mantegna to Michelangelo with his Madonna of the Stairs. 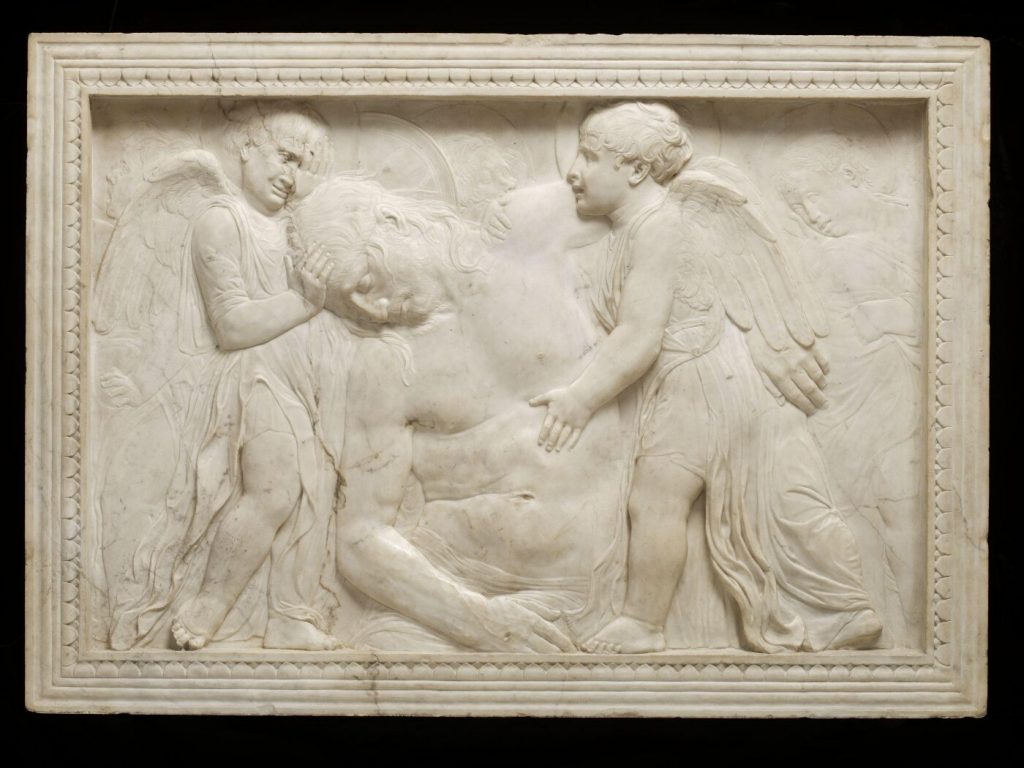 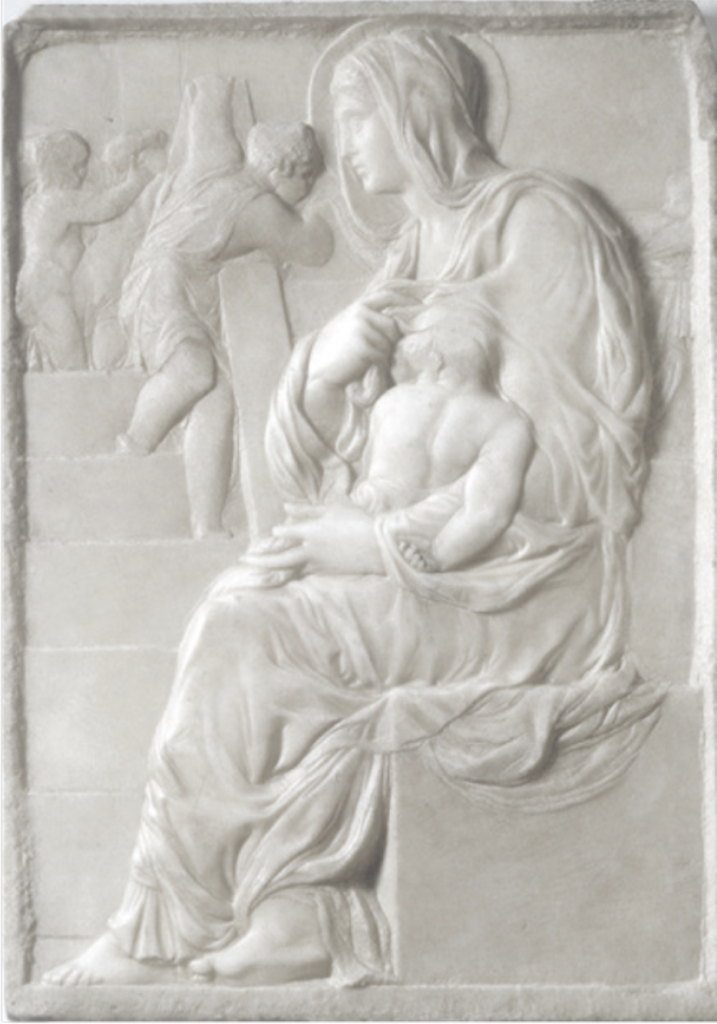 The Dead Christ Tended by Angels

The relief of The Dead Christ Tended by Angels, probably made for the front of an altar with amazing dramatic angels in the background.

Madonna of the Stairs

Donatello had a profound influence on other artists during his lifetime, sculptors and painters alike, from Masaccio and Mantegna to Michelangelo with his Madonna of the Stairs.

Another breathtaking example of his skills is visible in Pazzi Madonna which was originally produced for private devotion. This representation was not the first “sweet Madonna” created in the 1400s, but became extremely popular and is known for several copies. Not only because of the heart-warming depiction of maternity; but also thanks to the usage of three-dimensional space through a one-point perspective.

The galleries in the Palazzo Strozzi are full of marble statues, wall decorations, bronzes, and terracottas with Madonnas, putti (called spiritelli), saints, and religious scenes. Donatello was a very popular artist during his career. Among his commissioners were aristocrats, rich merchants, the super-rich Catholic church, and of course, the powerful Medicis. Donatello even became friends with Cosimo de’ Medici, a banker, who soon established the Medici family as effective rulers of Florence.

What is also worth noting is that some of the bronzes presented at the exhibition have been moved for the first time from the Italian churches where he installed them 600 years ago. That includes a relief, a statue, and two bronze doors, from Siena Cathedral and San Lorenzo baptistery in Florence, which were also restored to their former glory. It is also a unique occasion to see the gilded bronze The Feast of Herod (c. 1423-27) from the Baptistry of Siena and a bronze panel of The Miracle of the Mule (c. 1446-49) from the Basilica of Sant’Antonio in Padua. In Florence, they are displayed at the appropriate height and with excellent lighting, while such a situation won’t happen in their real homes.

At the same time, the two most famous works by Donatello, David, and the marble Saint George are installed in the much less crowded Bargello, also in the company of related works by other artists to emphasize his importance for the development of the epoch. The bronze David was the first unsupported standing work of bronze cast during the Renaissance, and the first freestanding nude male sculpture made since antiquity. It depicts David with an enigmatic smile, posed with his foot on Goliath’s severed head just after defeating the giant. The youth is completely naked, apart from a laurel-topped hat and boots, and bears the sword of Goliath. David was commissioned by the previously mentioned Cosimo de’ Medici.

The exhibition Donatello: The Renaissance runs through July 31, then from September 2022 to 8 January 2023 it moves to Staatliche Museen in Berlin and further to Victoria & Albert Museum in London. Naturally, Florence feels like the place to see it, if possible, especially if we can travel to other cities – here you can check a map of Tuscany with other places where you can visit Donatello’s works. Also note that the artworks presented in Berlin and London will vary in each city. The Donatello exhibition in Florence with its 120 masterpieces will be the richest – it includes the masterpieces from the Metropolitan Museum of Art in New York, Louvre in Paris, National Gallery of Art in Washington, D.C., and Kunsthistorisches Museum in Vienna. It is a must-see in 2022.